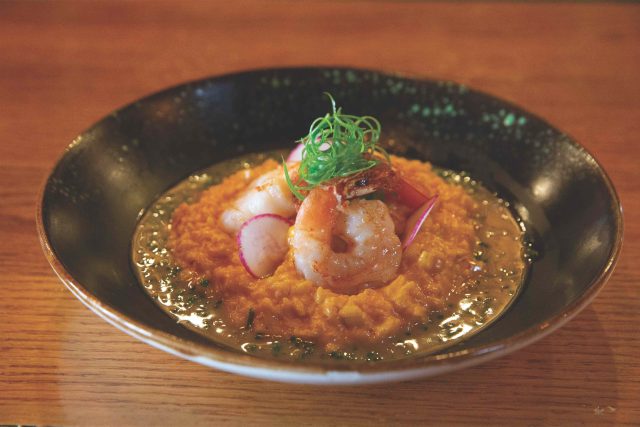 Anyone who read this year’s Best of Boulder East County was sure to have noticed one name showing up time and time again. The restaurant, 24 Carrot Bistro, won for both Best American and Best Service, and placed as the winner for the town of Erie for seven other categories including fine dining, burger, seafood and dessert. The people have spoken, so we went to find out if the place is all it’s cracked up to be.

It is. And then some. But it took a while for this eastside gem to connect with diners.

“We were kind of hidden out here for quite a while,” says co-owner and general manager Bianca Retzloff. The bistro first opened its doors in July 2015, when Retzloff and chef-owner Kevin Kidd decided to embark on a lifelong dream of owning their own place. The pair had met in 2009 while working at Colterra Food and Wine, the sorely missed house of garden-fresh cuisine in Niwot. “That’s where we got a taste for being a destination restaurant,” says Kidd, noting that Colterra helped to provide the blueprint for 24 Carrot Bistro’s decided position on the outskirts. “You know it, you go to it, you seek it out.”

Retzloff says the restaurant’s progress has been tied to the growing community it calls home. Since 2015, Erie’s population has grown from 24,000 to over 32,000, with no sign of slowing down. “I think we jumped on the Erie bandwagon before there was an Erie bandwagon,” Kidd says with a laugh. As the town swells around it, 24 Carrot Bistro remains a gourmet island unto itself.

Both Retzloff and Kidd are restaurant lifers. Retzloff is a Colorado native with clean eating in her blood. Her dad, Mark Retzloff, co-founded Alfalfa’s Market in 1979 and has since been a pioneer for organic food and natural products across the region. She grew up in an environment where quality ingredients were a given. The food at 24 Carrot Bistro reflects a deep-rooted philosophy where good, largely local components reign supreme. The menu has four large changes with each season, with another four smaller changes usually happening as new ingredients become available mid-season.

“I grew up on a better diet than most people,” says Kidd, a Scituate, Massachusetts, native whose grandfather — a fireman, fisherman and lobsterman — made sure fresh fish constantly graced the plates at Kidd’s family home. To such a degree that it was not uncommon to hear cries and protests of “lobster again?”

Kidd’s culinary career began in high school, where he spent all four years working at The Roadkill Cafe in Cape Cod. “The food was terrible but it taught me about how restaurants were run,” he says. After moving to Boulder to attend the University of Colorado, Kidd launched into the local restaurant scene, working at local staples Jax Fish House, Carelli’s, Chautauqua and the now-closed Zolo Grill and Full Moon Grill. In 2007, Kidd helped open Colterra from the ground up, acting as chef de cuisine while owner Bradford Heap ran the place as executive chef. After a stint in San Francisco — where Kidd worked at Daniel Patterson’s Coi, Restaurant Gary Danko and Nopa — he returned to Boulder to act as the executive chef at SALT, also owned by Heap, for the first three years it was open.

Kidd was a student of Heap. Heap was a student of Alain Ducasse, having worked for the iconic chef at Le Louis XV in L’Hotel de Paris Monaco. Kidd credits Heap for teaching him much of the classic French technique that underpins 24 Carrot’s menu. Retzloff says Kidd still has “groupies” who have followed his career since his time at Colterra.

Retzloff now gracefully handles the front-of-house, though her knowledge and kitchen experience also runs deep. After attending culinary school at the now-closed Art Institute of Colorado she worked at both Colterra and SALT before spearheading the culinary department when Alfalfa’s reopened in 2012. Kidd became the executive chef at both the Boulder and Louisville locations before he and Retzloff — each fresh off a string of successes in the worlds of fine dining, restaurants and grocery stores — left to open 24 Carrot Bistro.

“We wanted to open a small, intimate restaurant that was the center of the community,” says Retzloff.

During the week, the restaurant serves lunch and dinner, with a not-to-be-missed brunch on Saturday and Sunday. “One of the big things that set us apart is having a chef-owner on site,” Retzloff says. On any given day, Kidd is visible on the line, putting final hands on plates as they make their way into the dining room.

Dishes like the crispy calamari, with buttermilk, greens, pepperoncini, cherry tomato, basil aioli and romesco, and the warm kale parmesan dip with house-made sweet potato chips have been on the menu since day one. However, most of the menu is renewed with each seasonal makeover. The duck confit is another early staple, though Kidd says the toppings change often. This is the kind of food that would surely make Alice Waters proud, with even the most lavish feasts leaving diners invigorated rather than weighed down.

The cocktail program is also exquisite and in frequent fluctuation, and with most drinks sitting at $12, they seem to have missed the mixologist memo that excellent beverages must break the bank. Drinks like the La Madrina (with tequila, elderflower, lemon vanilla, honey and peppercorn tincture) and the Why Did it Have to Be Snakes (with coconut-washed Japanese whiskey, honey, salt and lavender) exhibit the place’s penchant for both the superb and the tongue-in-cheek.

Great food has always been worth a journey, so much so that the Michelin Guide organizes its ratings around whether or not a place is worth a detour (two stars) or a special journey (three stars). Whether folks are coming from near or far, 24 Carrot Bistro should be at the top of any diner’s to-do list.