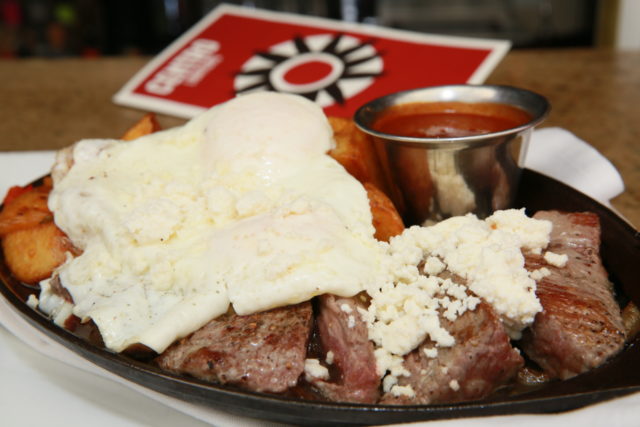 Steak and eggs is one of the quintessential American breakfast dishes. It combines the unrivaled satisfaction of eating a juicy steak, a pleasure far too often reserved for evening meals, with the simple pleasure of a perfectly cooked egg (that is to say over-easy so the steak gets a nice coating of yolk — but to each their own).

Steak and eggs isn’t an everyday breakfast for many of us today (save for you paleo disciples), but it used to be.

Americans were voracious meat eaters in the late 1800s and into the first half of the 20th century. This was a time when having a thick waistline was a sign of health and wealth, and, according to Lowell K. Dyson’s article “American Cuisine in the 20th Century,” a time when food wasn’t categorized by mealtime. Turn-of-the-20th-century Americans consumed huge breakfasts of steak, oysters, lamb, fish, bread, eggs, and of course coffee every day.

And then the field of nutrition emerged and slowly but surely, science began to tell Americans to lay off the high-protein diets and eat something green.

Still, the steak and egg breakfast remains safe for the most athletic and heroic among us.

Long before the Adkins/keto/paleo trends of late, bodybuilder Vincent Gironda bucked the mounting science against high-protein diets through the 1950s and into the ’70s by championing a diet of nothing but steak and eggs. Every day, two meals a day.

It became a tradition for astronauts to eat steak and eggs for breakfast after NASA’s first flight on May 5, 1961. Before he launched himself into sub-orbital spaceflight on Freedom 7, Al Shepard woke in the wee hours of the morning, shaved, showered and ate a breakfast of filet mignon, eggs, orange juice and tea. Shepard didn’t just eat steak and eggs because he liked it; the meal was strategically high-protein and low residue to keep him full for hours without the need to use the bathroom.

Freedom 7 was successful, and so Shepard’s pre-flight breakfast became a tradition before space flights for decades.

So, there you have it. Steak and eggs is foundational to American cuisine. Sure, it’s probably not good for most of us desk jockeys to eat steak and eggs every day, but it’s worth the splurge on the occasional Sunday morning brunch.

And if you’re already planning to indulge a little, why not spice it up? The folks at Centro Mexican Kitchen have taken this classic breakfast and given it a delicious twist with their carne asada and eggs brunch dish.

The difference is the chile rojo, a spicy red sauce that is fundamental to tamales and enchiladas. Centro serves up a sauce that is fantastic in its simplicity, adding heat to the steak and eggs without losing the individuals flavors of the ingredients: chilies, tomatoes, onion, garlic, oil and salt. Caramelized onions add a mildly sweet layer of flavor, and as always, another dimension of texture.

But the sirloin is really the star of the dish, marinated to melt-in-your-mouth perfection.

Instead of including a tortilla, more common in traditional Mexican cuisine, Centro opts to serve thick-cut potatoes, perfect for sopping up yolk and chile rojo, or as a conveyor to shovel bites of that flawless steak into your mouth.

While Centro’s version of steak and eggs has a few carbs on the plate, it’s still a dish fit for astronauts and bodybuilders — and sometimes desk jockeys.