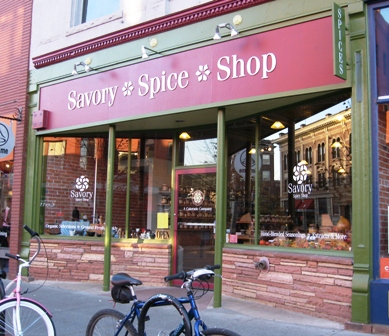 Try to imagine the San Lorenzo Market in Florence, Italy. A towering two-story building, it is packed with boisterous Italian men each selling their trademark food. Patrons buy cheese at one booth, fetch their bread at the next and select tomatoes at another. For Italians, it’s grocery shopping. For American tourists, it’s another planet.

While the obvious majority of Boulder’s groceries come from large supermarkets like Safeway, King Soopers and Whole Foods, shoppers seeking extra “oomph” in their ingredients may turn to specialty stores.

“Most of my customers are foodies and health-conscious people,” says Patti Scott, owner of Oliv You & Me, a boutique shop on Broadway that sells artisan olive oils from around the world. Her store is one of several specialty shops in town that attract locals and visitors. Others include the Savory Spice Shop, which neighbors Scott’s store, as well as Herb’s Meats, a specialty butcher, and Cheese Importers in Longmont, which sells cheeses from many countries.

“I think Boulder is pretty unique in that people support the smaller shops,” Scott says, adding that boutique shops such as hers “add a tremendous amount of character to a town.”

According to Philip Graves, an economics professor at the University of Colorado at Boulder, boutique shops are representative of the town’s fiscal wealth and heightened awareness of food.

“Boulder is a high-income town, and a lot of people like to cook,” Graves says. “A lot of people want to get what they think are the best ingredients.”

According to Scott, the ingredients available at specialty stores are often a step above what one may find at larger supermarkets.

“We have higher-quality oils that have a much more in-depth flavor,” she says. Dan Hayward, owner of the Savory Spice Shop, acknowledges that customer service also differentiates smaller shops from large supermarkets.

“We are a small family of five to six employees, and we treat everybody like this is our house,” he says. “[In a supermarket] somebody can point you to the salt and pepper, but that’s about it.” Hayward’s shop, which sells wholesale spices that are ground in-house in small batches, allows customers to purchase spices in a more conscious, deliberate manner.

“You can buy very small or very large portions,” Hayward says of his vast array of spices from across the globe.

One of the common deterrents to boutique shops is their perceived higher cost over large supermarkets.

“It really comes down to pricing,” says Cassidy Willey, a 22-year-old Boulder resident. “If I see something on the shelf that’s $20, as opposed to $12 of the same thing,” she says, the likelihood that she will purchase the more expensive specialty item is low. However, she says, samples go a long way.

“One thing that has swayed my opinion in the past is the tastings at Whole Foods, where they feature a specialty item and let you sample it,” she says. “I’m more willing to buy the product after I know what it tastes like and that it’s going to be worth the extra money.”

At Oliv You & Me, Scott offers tastings that allow customers to do just that.

“[Customers] can try the oils, and at most larger places they can’t do that,” Scott says, emphasizing that patrons receive a more extensive knowledge of the product, including where it comes from and how it’s made.

Hayward likens the concept of a specialty food shop to a boutique clothing store.

“If someone is going into a store to spend $300 on a blouse, she wants to get some help,” Hayward says. Similarly, those spending a bit more to stock their pantry expect a higher level of customer service. This is precisely what specialty food shops provide over the larger supermarkets.

Then why aren’t smaller stores more popular across the country? According to Graves, it has a lot to do with the U.S. economy.

“Our economic system encourages competition, and in that world, there are always ‘losers’ as well as ‘winners,’” Graves says. With this level of competition, most businesses seek only to offer the greatest value for their customers.

“The large stores drove the little stores out of business with lower prices, larger selection and ‘one-stop’ shopping,” he explains. In higher-income towns like Boulder, smaller stores that may be more expensive can survive.

“Little shops can work in a rich town where they wouldn’t work in a poor town. There wouldn’t be a high enough demand,” Graves says.

“Typically the owner of the small store lives around here too, and so they are re-spending their income in Boulder,” he says. “The profits from King Soopers or Safeway are going to corporate headquarters somewhere else.”

Joining Boulder’s food-loving locals is a high level of outsider traffic. According to Graves, the customer base is so diverse in part because of all the commuters.

“Boulder is effectively bigger than its population; it has a bigger customer base than just the size of the city. [People commuting] can pick something up on the way home,” Graves says.

For both outsiders and locals, the thriving food scene is special. The past 10 years have seen a surge in restaurant density and quality, and shopkeepers expect the trend to continue.

“Most Boulderites say they would like to see more shops like mine, such as a bakery or a cheese person,” Hayward says.

Scott adds that “people here look at food as being pretty important. They want it unique.”