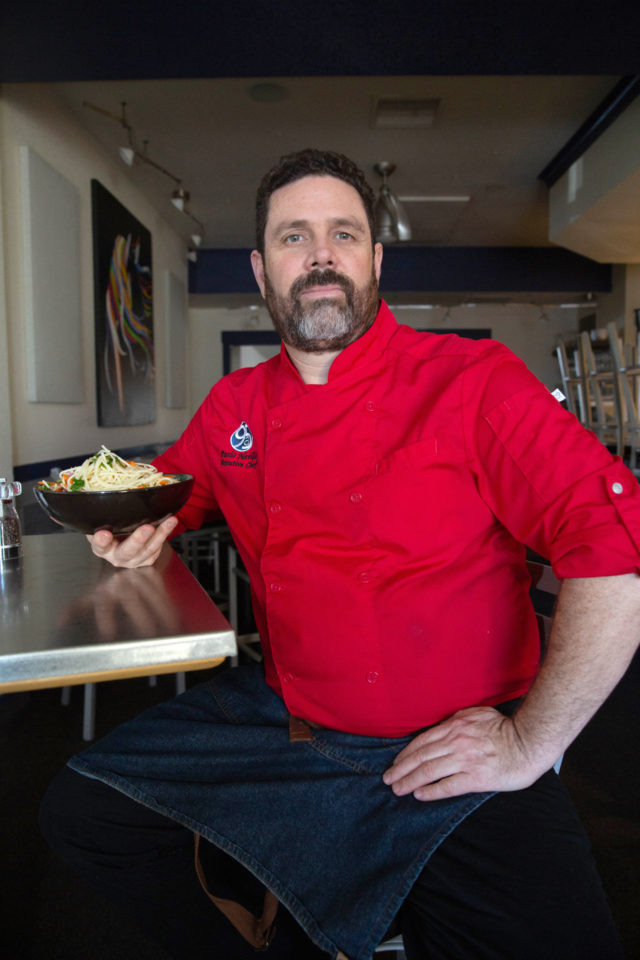 One morning in March 2021, Paolo Neville woke up, got out of bed, and realized he couldn’t smell the coffee brewing or the eucalyptus in his shower. The executive chef at Lafayette’s 95a Bistro knew he was in trouble. After carefully avoiding infection, he had contracted COVID.

“Ironically, I got my positive test result exactly one year to the day after they shut down all the restaurants,” Neville says.

What he didn’t imagine at the time was the long and sometimes disgusting path he would travel to partial recovery of his senses.

“My taste was never actually gone. I had a fever for eight days, I lost 10 pounds and had some brain fog. It was like I had a strong flu. All the symptoms went away except my loss of smell,” he says.

Early in the pandemic, people infected with SARS-CoV-2 reported losing their sense of smell, sometimes with no other symptoms. One study from the Mayo Clinic in June 2020 compiled data from 8,438 people with COVID, with 41% reporting smell loss. Another study later that year, from the Institute for Research in Fundamental Sciences, found that 96% of the 100 people survey had some olfactory dysfunction, with 18% experience a total loss of smell. As time wore on, it became clear that some people still hadn’t recovered their sense of smell a year after infection.

For most folks, a loss of smell is annoying, but for a chef, cooking without your nose is a career-threatening challenge. “Not being able to smell things pretty much sucks. The kitchen aromas make me feel at home,” he says.

Neville began looking for ways to restart his olfactory connections, including suggestions from a Facebook group for people who’ve lost their sense of taste and smell to COVID. “They post various remedies, but none of them really work,” says Neville, who unsuccessfully tried sniffing essential oils.

Back in the restaurant kitchen, Neville fell back on his decades of cooking experience and instincts, but sometimes he double checked.

“To confirm what I already knew—since I knew how something should smell if I cooked a certain way, I’d ask other cooks: ‘Hey! Is this right?’ This past Thanksgiving I was chopping this mountainous pile of fresh herbs—sage and thyme—for stuffing for 300 people. When I went out in the dining room the diners immediately said: ‘Wow! You smell great!’ I couldn’t smell anything,” Neville says.

The chef’s palate and sense of taste were absolutely fine until mid-July of last year. “It just came on out of the blue. I could taste things properly, but it was immediately followed by this horrible rancid metallic taste. Somebody described it really well as the taste of burnt vomit,” he says.

Neville thought it was acid reflux, changed his diet and saw a doctor. “Nothing worked. It took a while before I realized it was from COVID,” he says.

With the taste present 24/7, Neville tried things like chewing gum constantly. “It really started to affect my mental health. It faded gradually but then one day it migrated to my nose. Not only could I not smell most things, but now all I could smell was this rancid, sour something,” Neville says.

The science is still emerging, but there’s a growing consensus among researchers that smell loss occurs when the coronavirus infects cells that support neurons in the nose, based on research from Harvard Medical School.

Neville estimates his ability to smell now is about 50% of what it was pre-COVID, depending on the day. “If someone is roasting a pan of mushrooms, I won’t smell it walking by. I literally need to stick my face in it and take a deep sniff,” he says.

About six months after he lost his sense of smell, Neville was driving home with his kids when they encountered a grass fire. “One of the first things I could clearly smell was that smoke. Maybe it’s my brain saying, ‘This is important for you. You really need to be able to smell this,’” he says.

Born in Vermont, Neville moved to Boulder at four years old as a self-described “dharma brat,” part of the city’s Buddhist community.

He washed dishes at Round the Corner restaurant and rapidly learned how to fry and saute, cooked at Piccolo’s Restaurant, and did a long stint in California’s wine country. Back in Boulder he worked at The Med and Brasserie Ten Ten, both shuttered by the pandemic.

“Cooking evokes all these emotions and feelings. To have my sense of taste and smell gone permanently would have been devastating,” Neville says.

“Now I just keep my fingers crossed that it doesn’t go backwards. It can. I’ve talked to other people who were making progress and then one day their taste or smell was gone again.”

Neville was in the kitchen recently at 95a Bistro making a tapas item for the winter menu. “I wanted to do something new, not your run-of-the-mill hummus. I made a black garlic hummus that I garnished with figs, feta cheese and some fresh mint and it was just outstanding,” he says. “I could smell the tahini as it was spinning in the Robo Coupe. It’s nice to have that feeling coming back to my work.”

Boulder Fresh Garden has opened at 2400 Arapahoe Ave. serving breakfast, lunch and Thai fare. . . . Mana Thai Comfort Food has opened at 510 Third Ave. in Longmont. . . . Mountain Sun Pub & Brewery in downtown Boulder has reopened after a long pandemic-caused hiatus. . . . Boulder’s Tandoori Grill has reopened. It had closed temporarily after owner Paul Dhanoa and his family lost their home in the Marshall Fire. . . . . North Boulder’s Philly steak place, the family-run D’Angelo’s Italian Deli, has closed after 10 years in business. . . . . The long-delayed Driftwind restaurant at the Boulder Reservoir is expected to open fully this summer after neighborhood efforts to derail it. A March 2 special hearing will determine whether Driftwind gets the restaurant liquor license it needs and you get to sip a chill margarita after a swim at the city-owned facility.

“You can see everything in the universe in one tangerine. When you peel it and smell it, it’s wonderful. You can take your time eating a tangerine and be very happy.” —Thích Nhat Hanh