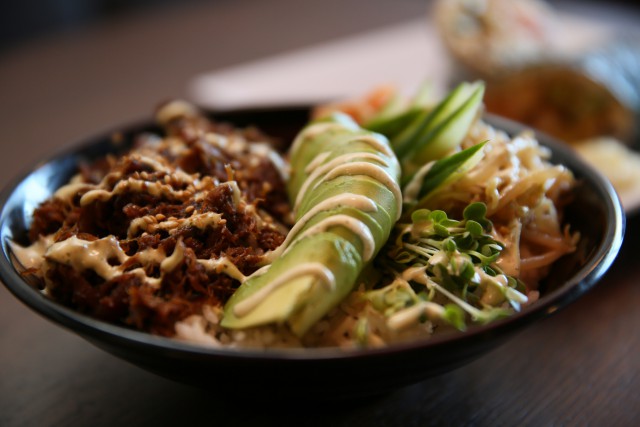 One of downtown San Francisco’s busiest lunch spots is Sushirrito, whose menu you should be able to ballpark from the name. Like the Wu-Tang Clan, its forearm-sized sushi rolls ain’t nothing to mess with.

One of Boulder’s newest eateries, Motomaki, now open in the 29th Street Mall, is following suit.

The rapid-service sushi joint offers 12 different rolls, or the choice to design your own. All are available as bowls, but are intended to be served as burrito-sized hand rolls, wrapped in foil and halved. It’s the perfect example of what Steve Jobs meant when he said the job of entrepreneurs was to provide what consumers didn’t yet know they wanted. I didn’t know I wanted a sushirrito until I heard that lovely portmanteau. And now that I’ve seen how the other half lives, I never want to go back to a world without them.

The Kalbi roll ($12) was a sushi take on Korean, with beef, kim chi and sprouts, packed in with avocado and cilantro jalapeno mayo inside an enormous nori wrapper. But the most interesting thing about the flavors had to do with its size. Single bite pieces of sushi blend together well. You get the whole flavor mashed into one bite, and can easily soak it in soy and wasabi. But the large-size roll expanded the physical size of the flavor pallets, making for less mixed flavors and the ability of certain notes to dominate. One of the ways it is most obvious is the seaweed wrap. No longer just the glue that holds the roll in shape, the nori is a broad sheet of flavor that can lay across your tongue like a condom, protecting it from the other flavors. Similarly, you can strike fillings like a vein of gold, with one bite being all spicy tuna and the next being all rice. Anyone that read the viral blog “Dear Guy Who Just Made My Burrito,” that detailed the horrors of improper burrito layering, is familiar with the potential nightmare scenario: fighting through the empire of sour cream only to end up in lettuce country or a cilantro cavern. The horror!

Another tasty roll on the menu is the eggplant roll ($7), which offers a warm, squishy filling of teriyaki eggplant, with asparagus and tempura crunch. It tastes warm and comforting.

Motomako also ventures even further toward Mexican with the Nacho Tuna roll ($12), which wraps spicy tuna, tempura aspargus, mango salsa, gaucamole, crispy onions and sour cream up with a sriracha aioli, and toward other Asian cuisine with a Bahn Mi roll ($9). This is the sort of thing that we need more of to reclaim the word fusion from Pat Metheny.

Also on the menu are several varieties of poki. As with all things fish, it’s never quite as good inland, but it’s solid nonetheless.

But there was one thing that puzzled me about Motomako. Considering that the rolls are so big they require two hands, why did they even bother to give me chopsticks?