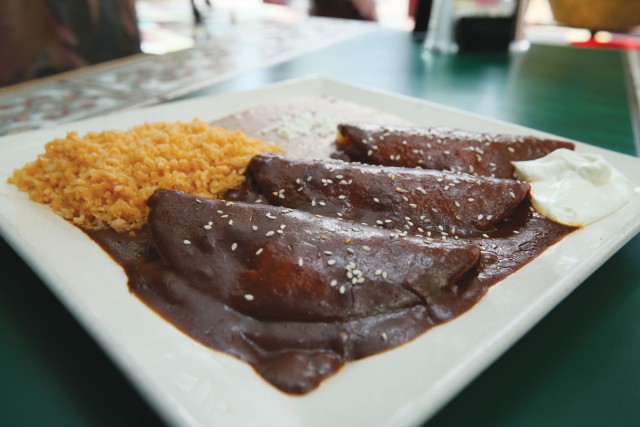 Though the specific locale is different for everyone, we all have that place, the one you drive past nearly everywhere you go, thinking to yourself, “I should stop in some time,” but keep driving past for at least another six to eight months. You know where I’m talking about.

For this reporter, it’s Rincon Del Sol, a Mexican restaurant that sits at the corner of Folsom and Arapahoe in Boulder. Always on the way to somewhere else, and across the street from some of my favorite eateries when that ’hood was my destination, it got punted and punted again until it was so far downfield we were no longer in the stadium.

I’m sure you can relate. Luckily, all that anticipation didn’t build things up to an unachievable idea when I finally made it in the doors.

The interior is bright and cheerful, with color schemes and decor emulating the feel of the Yucatan. Sea-foam greens and carved wooden tables with plants, all of it densely packed enough to ape the jungle vibe as well. The Yucatanthemed, sit-down Mexican restaurant is hardly a rarity amongst restaurants, but Rincon Del Sol does it well, and far better than the plain exterior hints.

The joint has changed hands since Boulder Weekly last reviewed it in 2009, but the menu has stayed pretty much the same, with offerings in the style of its decor: enchiladas, fajitas, burritos and combo plates.

The lunch menu, served until 3 p.m., is a score, with single-item combos running only $6.99, and two-item combos only bumping things up a dollar to $7.99.

I went for an old standard: the mole enchilada/chile relleno combo. The mushiness-to-flavor ratio of enchiladas, the spice palette of mole and the style of preparing the chili relleno are all bellwethers for me of what else to expect from the menu.

And for the most part they delivered. The chicken in my enchilada wasn’t overly soggy or bland (though I had asked for beef), and the moledrenched tortilla it was mummified in had a nice, rich flavor of spice and cocoa.

It was better than the red sauce that covered up the chili relleno, which was fried in an egg roll wrapper instead of an egg batter and filled with melted cheddar instead of the traditional cotija.

A theater professor I had in college used to say “that there isn’t right or wrong ways to do things, there are just choices.” I responded by saying, “Yes, but some of those choices are good and others are bad.” That’s the way I feel about cheddar rellenos. Certainly, there is someone out there who likes them, thinking that sharp, golden flavor and magma-like texture of cheddar is a good choice. But it’s not me.

To its credit, the cheddar did pair nicely with the extra mole sauce from the enchilada.

I shelled out an extra buck for a ladleful of green chili atop the rice and beans that came on the side, and it was well worth it. Not because the rice was bland and in need of green chili, but because green chili is such a subtly complex dish that everyone has a different take on it. I like to think Coloradans are to their green chili like Texans are to their barbecue recipes. And Rincon Del Sol’s was one of the better green chilis I’ve had regionally, with a bright black peppery finish that made it its own animal.

Rincon Del Sol isn’t fine dining or the best Mexican in town. But it’s got a great lunch special, some good takes on familiar favorites and it is a convenient place to hit, because months of driving by established that it is apparently on the way to everywhere.