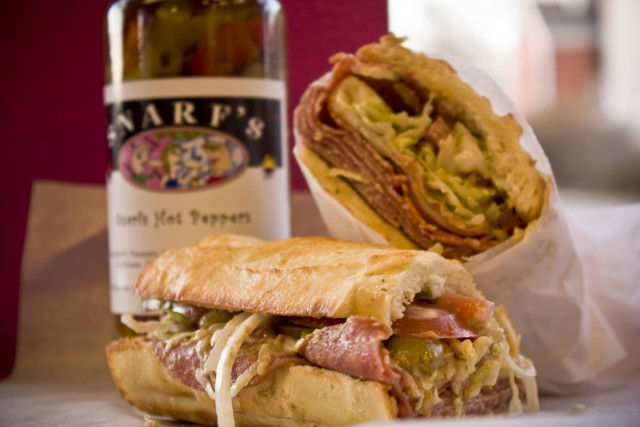 My relationship with sandwiches has been ambivalent at best, due perhaps to their constancy as a lunchtime staple through my elementary school years. One unintended consequence of this routine is that I occasionally experience an inexplicable craving for Underwood’s Deviled Ham, a curiously Satanic thing to be feeding a grade-schooler. A more lasting result is that I’ve generally avoided sandwiches, except for burgers and a few others, most of my adult life.

I suppose it could have been worse. Mom was good enough to spare me the horrors of Wonder Bread, and at least I wasn’t like classmate Jim, who would fly into a nauseated tizzy by the mere mention of a mayonnaise sandwich. Certainly I can’t deny that I’ve enjoyed a few truly memorable sandwiches, such as the prosciutto on sourdough at Oakland’s Genoa Deli, or the Jarlsberg and ham numbers my sister puts together.

With this checkered history, I recently strode into the popular Pearl Street location of Snarf’s. I first experienced its offerings in the ’90s, stopping into its old Pearl venue, a former A&W and chicken-wing joint. Where the old digs might best be described as rickety, the new spot is bright and colorful, with a palette seemingly culled from everything in the Crayola box.

The offerings here are classic sandwich shop, with the addition of entrée salads, such as the venerable Cobb, soups, and a multitude of specialty sandwich offerings. These include prime rib and provolone, rotisserie chicken and, for the vegetarian, a portobello and provolone combo. The friendly staff makes sandwiches to order, and the wait can take longer than what you’d experience elsewhere.

Jon, my wingman on this visit, walked on the lighter side with a $7.95 Italian Julienne salad, consisting of strips of creamy provolone, piquant pepperoni and salami over lettuce. The meats provided peppery flavor, and the Parmesan dressing possessed robust taste and texture that indicated this wasn’t something out of a mass-produced bottle. Less impressive were the greens, which had a grittiness that would likely be cured via more thorough washing.

Colleague Carin’s choice of a $7.65 eggplant Parmesan featured a fine tomato sauce with a balanced and not at all acidic taste. The featured vegetable retained a crunchy but not too thick breading that played well off the tangy sauce. The melted cheese didn’t hurt either, and this sandwich needed nothing else beyond the provolone, veggie and sauce.

I’d change one thing in ordering my $7.50 French dip sandwich special, which came with a side of chips and a soda. Knowing what I know now, I wouldn’t have asked for the optional hot peppers, as they masked the considerable quality of this sandwich. I’m typically used to French dips with overly processed beef and dip that might have been rendered from a salt lick.

Happily, Snarf’s meat was the real McCoy, moist and rare, and closer in taste and quality to exemplary prime rib than something pressed and formed. The dip exuded true beefy flavor without the all-too-typical sodium spike. Topped with golden toasted bread, it’s a winner.

While Snarf’s hasn’t entirely cured me of my ambivalence towards the sandwich, I have to admit that if I had experienced their eggplant and French dip in my youth, I’d feel more positively about this foodstuff today.