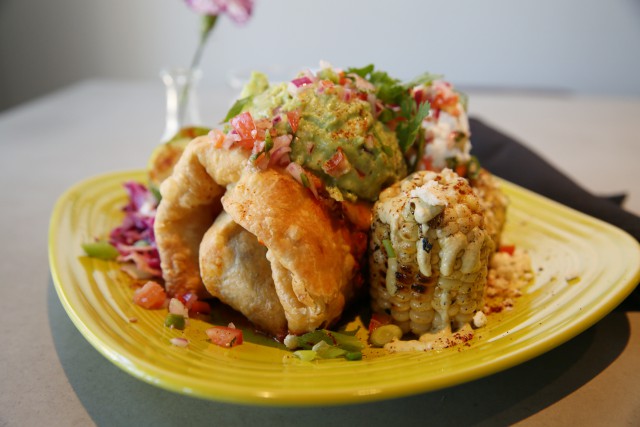 Not to disparage the noble roach coach, but for many budding restaurateurs, the food truck is mostly a vehicle (pun intended) to open a sit-down storefront, offering them a low-cost way to vend and market their chow. But like so many things, more dream the dream than live it.

Not the case for Verde, a much-beloved Boulder food truck that recently set down roots near 28th and Valmont.

The interior is clean and modern, with brushed concrete floors and simple, western decor. It beautifully walks the line of classing things up without giving the impression that you might be violating an unspoken dress code requiring you wear your nice North Face jacket. It’s one of my old maxims: fine food doesn’t require fine dining.

And Verde does offer its own variety of fine food, quite the trick with Mexican, which is often better when served with negative class or flair.

Menu offerings expand on the truck’s cast of Sonoran-style burritos, with California (carne asada and potato), machaca, carnitas, chicken, asada, and veggie varieties available hand-style, enchilada style doused in sauce or dropped in the fryer and done up as a chimichanga. They’re all about $2 more expensive than the truck, but that’s the price of having a place to park your car and your butt, and well worth it.

The burritos are mega-burly, with nothing but meat, rice and beans, wrapped into a nearly football-sized roll. They’re definitely for the bike commuter, or to take part of to go, as burritos should be.

For the lighter crowd, Verde has several salads, my favorite of which is the jicama salad, made with mango, cherry tomatoes, red onions, cilantro and mixed greens tossed with honey-lime vinaigrette. Pro-tip: add some carne asada, ‘cause mixed up with the jicama and dressing, that shizzle is good enough to nominate the cow for sainthood.

Another interesting item is Verde’s chili relleno, which is encased in at least a half inch of fried corn batter, making it almost as much hushpuppie as it is relleno.

But whatever you order at Verde, don’t forget about two sides: hot sauce and corn. The housemade hot sauce is fantastic, going beyond standard vinegar and hot peppers to incorporate more complex fruit and vegetable flavors. The carrot habanero sauce is especially good, bringing out the golden flavors of the habanero more than the rain of hellfire and regret that the pepper is known for. And then there is the Mexican street corn, which is worth a trip all by itself. Verde chars it on the grill, then dusts the cobs in hot pepper, cojita cheese and a touch of jalapeno crema. You can get an appetizer order for $7, or get a side for $3. Considering the side is two cobs and the appetizer is four, this is a good way to game the system. An even better way is to add two sides to your entree for $3, and make both of them corn. Voila, you just cut the price by more than half like a boss.

One thing that sadly missed the mark for this critic was the chips. Verde serves fresh chopped and fried wedges of corn tortilla, and while I appreciate their freshness, the thickness makes them a bit tough to bite into.

But if the worst thing one has to say about a place is that their chips are kind of thick, that alone should tell you all you need to know.