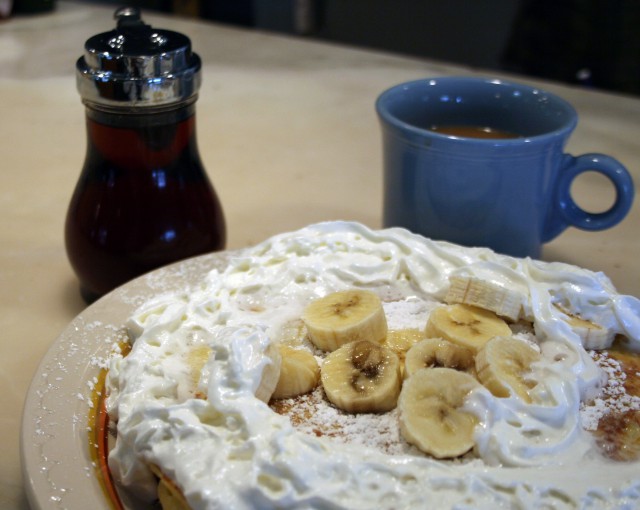 A few years back, I went to a Le Peep’s location in Englewood and had a singularly horrible breakfast, which ran counter to my experience at the Boulder location. I eventually learned the reason for the disparity in quality. The Boulder venue operates independently from the chain locations (although there is some relationship to the Longmont venue), except perhaps for some long-ago deals involving naming rights too arcane even for the Obscurity Corner.

Intellectual property issues aside, it had been a while since I last ventured into Le Peep, and it was again high time to sample breakfast. Nestled next to McGuckin Hardware, this breakfast and lunch spot has a quaint country kitchen feel that doesn’t veer off into the twee. One endearing touch is that those seated at a table near the restrooms are eligible for a free gooey bun, an English-muffin-turned-cinnamonroll.

Despite the early morning hour, service was prompt and accommodating for our multigenerational group, ranging from an elementary school kid to grandparents. Other customers were equally varied, consisting of families, retirees and students. The breakfast menu was similarly diverse, with the proverbial something for everyone, including the omelets and waffles, as well as biscuits and gravy, French toast, and trout and eggs.

Our server was more than willing to accommodate 6-year-old Addie’s request for a chocolate chip pancake instead of a plain one as part of the $2.80 Baby Ruth Cakes plate. Good call, as this child-pleasing breakfast resembled a fluffy chocolate chip cookie generously doused in whipped cream.

On balance, Ted’s $8.89 waffle platter sided with potatoes, eggs and link sausage was fine, but a few tweaks would have made it even better. The waffle lacked the crunch of a good Belgian number, but the multigrain batter added intriguing heft and a complex texture much better than Bisquick. No complaints about the eggs and sausage, although Ted’s potatoes could have been hotter coming out of the kitchen; otherwise, their golden brown edges and soft insides were first-class.

Pat declared her $8.79 breakfast burrito “chock full of chicken,” and it certainly was stuffed with ample poultry, eggs, cheese and potato. The topping of green chile sauce was hearty with a touch of spice, but not so hot as to send those with less adventurous palates out screaming in pain. My $8.99 Tamale Festival consisted of eggs sunny-side-up and two chicken and green chile tamales. The tamales could have been improved with a touch more filling, and I found the cornmeal more coarsely
textured than I prefer. But I couldn’t fault them on flavor, and the
blending of the tastes of egg and tamale created a satisfying
combination.

Tertia’s
$10.99 salmon eggs Benedict was a good choice, although the lox-style
salmon was cooler in temperature than the English muffin, poached egg
and Hollandaise sauce. On the other hand, the fatty richness and
velvety smooth feel of the fish was firstrate, and it was certainly of
better quality than anything found at comparable establishments.

While
the service and ambience are on par with the competition, it’s nice to
see that La Peep’s entree prices are a buck or two cheaper than most.
Value, selection and service make this a fitting choice for the whole
family.

Strictly speaking, lox and smoked salmon are two different things, distinguished by the method of preparation. True lox consists of a salmon filet that has been cured, or preserved, in a brine consisting of sugar and salt — it is not smoked. Brining came about as a way to preserve fish without refrigeration. What most people get on their bagels is not true lox, but something called Nova lox. Nova is also brined, although with less salt than true lox, and it’s also cold-smoked. Cold smoking occurs at something close to body temperature, and helps the fish retain a silky texture.