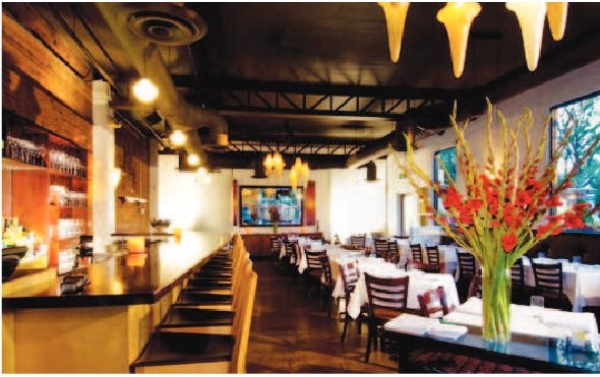 At Mateo’s happy hour, dubbed “après,” you can convene your own Pearl Street Algonquin Roundtable on the cheap between 5 p.m. and 6:30 p.m. Indeed, that’s what I attempted to do, by inviting author friend Lisa and her husband Peter, a therapist and practitioner of Buddhism. Lisa copped to being in a cranky mood, a situation that was quickly ameliorated by the elegant but not off-putting contemporary setting, and perhaps more significantly, a $5 Manhattan. The restorative properties of this beverage became quickly apparent as Lisa sang its praises, notably a complex and smoky profile.

The bar menu here is comprehensive, with selections ranging from light to the truly substantial. There’s a sirloin burger for $8, marked down from $11 and topped with caramelized onions. Also available is a $7 house-cut tagliatelle pasta adorned by mushrooms, herbs and cream.

We began our evening with small plates of $2 olives and curried mixed nuts. The first impression of both of these dishes wasn’t particularly impactful, and it took some time to fully appreciate their finer points. Typical olives are briny little buggers, and Mateo’s had a lighter savor, offset by sweet and subtly spicy cornichon pickles and citrus slivers. The mellow yet sprightly nuts were a marked improvement over the hit-you-over-the-head taste of “smokehouse” almonds.

The $3 frites were the favored starter, awesome fries with the perfect measure of salt and a whisper of sugar.

Served in a diminutive paper sack, these potatoes enjoyed the benefits of peanut oil frying, including assertive taste and a whispery crisp exterior coating a hot and fluffy core.

Moving on to something more substantial, we had both the $7 charcuterie and cheese platters, each marked down from the regular tariff of $16. The meat lover will be infatuated with the charcuterie, which includes a decadent scoop of house-made pate, velvety richness rounded with wine-like notes. The salametto, a petite salami, had a meatier, purer taste than its nitrate-laden, mass-market counterpart.

The cheese platter was also cause for lust, although I would have preferred these dairy treats to come out warmer so as to allow their full flavors to develop. My friends aren’t goat cheese fans, yet they eagerly devoured the Italian Verde Capra, a blue that has the unusual distinction of being made from goat’s milk. Popular Humboldt Fog was also noteworthy for its creaminess rather than the strong aroma common to goat cheese. To round things out, there was a Colorado Mouco Coulorouge, served as an understated soft cheese counterpoint, akin to a low key brie.

Things got weird in the form of a $6 pot of mussels, swimming in licorice-scented pastis, parsley and tomato broth. The mussels themselves were consistently tender, although some had a stronger flavor than others. But this broth was so compelling, we starting passing the pot around, sipping it directly from the vessel like a shamanistic cure. Lisa asked her husband, who was rapidly approaching a mussel induced altered state, “As a Buddhist, how are you doing?” He replied, “I am enjoying much pleasure.”

It’s hard to fault Mateo’s après menu. Paying full price for some of the platters could potentially give one pause, but that’s the beauty of the discounted menu. If you seek a happy hour venue that’s a cut above without emptying the wallet, check out Provence on Pearl: Mateo.

Clay’s Obscurity Corner The Algonquin Roundtable The
Algonquin Roundtable met in Manhattan’s Algonquin Hotel for most of the
1920s, including a stint in the Rose Room, where for unclear reasons I
once consumed a pre-Thanksgiving cocktail. The Roundtable’s informal
membership included such cultural lights as acerbic author Dorothy
Parker, humorist Robert Benchley and New Yorker editor Harold Ross.
Hollywood figures such as Harpo Marx and Tallulah Bankhead would also
participate in this daily luncheon, which had a reputation for vicious
practical jokes and wordplay. While some, including Parker, denigrated
the talents of the participants, the group could claim credit for a
handful of Pulitzer Prizes.