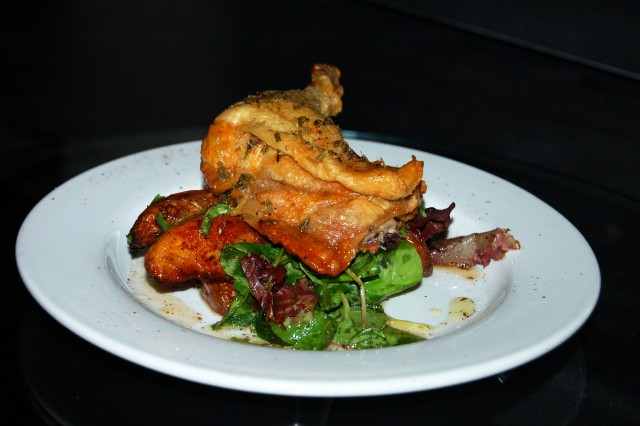 George’s Food & Drink, adjoining the Boulder Theater, is named for the unfortunate George Paper who perished in the theater decades ago. Supposedly the victim of an accidental hanging, he’s a restless soul said to still roam the building, a wispy shape in a drape. Others hold him responsible for the mysterious disappearance of several light bulbs. Apparently George likes it dark.

On a recent not too dark and not at all stormy night, I settled into dinner here with friends Tia and Andrew. George’s dcor is not what you’d expect from a place housing a restless spirit. Instead of cobwebs and Gothic architecture, this venue features a comfortably modern feel, particularly in the lounge area with its coffee tables and sprawling sofas. Of course, given George’s provenance, I had to ask our amiable server Mari, “Is this place haunted?” She quickly replied, “Not so much haunted as protected.”

The menu’s emphasis on comfort food and hospitable service also helped diminish any haunted qualities. We arrived moments before happy hour’s end at 6:30, but accommodating Mari let us order a discounted round of small plates and $3.50 well drinks.

First up were the $2.50 house-seasoned almonds. Those used to heavily seasoned nuts may find these too subtle for their taste. I savored the subtle hints of garlic, oregano, cumin and cayenne pepper that allowed the mellowness of the almond to shine through.

The barbecue pulled pork sliders were a screaming deal at $2 a pop; these were less bite-size morsels than full-fledged sandwiches. The meat was falling apart tender, and while the sauce was a touch sweet, this offering rivaled anything offered by specialty barbecue restaurants. Continuing the porcine exploration, $4 bacon-wrapped medjool dates struck the right balance between crisp and smoky saltiness and natural sweetness. My only wish was that dates were more sizable to match the bacon’s depth.

Satiated by small plates, Tia and Andrew ordered light entre salads. Andrew’s $7 caprese epitomized sublime simplicity, showcasing fresh, bright-red tomatoes and feathery mozzarella. A whisper of dressing added the right amount of tartness. Tia’s $8 chicken salad exceeded expectations. Tia lauded the fresh flavors, and Andrew appreciated the fact that it wasn’t doused in mayonnaise. The chicken was pleasantly flavorful, and it was set off by whole pine nuts and a foundation of tender greens.

Comfort defined my $8.50 platter of macaroni and cheese, a generous serving of elbow noodles sided with lightly dressed organic greens. It was creamy and rich, although it could have used more blue cheese to kick up the tanginess. However, this shortcoming was overcome by the endearingly crisp panko crumb topping. I’d order it again.

For dessert, we were divided on the daring $4 chocolate covered bacon, which consisted of room temperature slab pork slathered in chocolate sauce. Tia and Andrew felt it was not at the level of chocolate and peanut butter, but I enjoyed the melding of bacon with sweet cocoa. The $6 ginger pannacotta was a unanimous winner with its velvety custard and pungent flavor resembling crystallized candy.

Aside from its own guardian spirit, what sets George’s apart is a setting and quality of service consistent with a restaurant costing much more. Given its proximity to the Boulder Theater, it’s also a first-rate choice for a before-or-after-show repast.

While most find little to criticize when blending chocolate with items such as nuts and berries, it’s harder to reach consensus when mixing cocoa with savory ingredients such as bacon. While pork and chocolate could have been a favored midnight snack at Graceland, the most successful blends of chocolate and savory flavors involve fiery spicing. Mole, the wonderfully complex Mexican sauce served with poultry, relies on chocolate and chile to add depth. Other successful hot and sweet combinations include the masala spice chocolates at Vij’s in Vancouver and an oddly compelling jalapeno fudge I’ve sampled in Hill City, South Dakota.