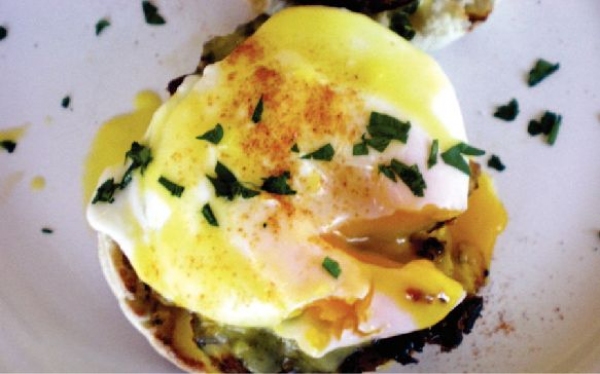 Formely housed in a smaller, more intimate spot on Longmont’s Main Street, Pinocchio’s is an Italian- American eatery now ensconced in a newish shopping center dominated by national chains. Granted, the current venue may not have all the charming homespun qualities of the old locale, yet it’s still a pleasant place to enjoy a meal and service that cost less than you’d expect.

The new location is certainly larger, with plenty of natural light and an airy feel set off by brightly painted walls and graphics of such luminaries as JFK and Marilyn Monroe — not together, though. These were among the decorative touches friend Kuvy and I first noticed on a recent Sunday morning. The amiable hostess even went so far as to lead us into a side room so that we could appreciate a striking portrait of Ray Charles.

Taking our seats, we noticed that the a.m crowd was composed mostly of older folks, with a smattering of families with children. Additional evidence of this establishment’s family friendliness includes weekly all-you-can-eat spaghetti offerings, available here and at sister restaurants in Brighton and Lafayette.

On weekends, Pinocchio’s wears two distinct hats, offering both a brunch menu and a textbook Italian lunch menu. Kuvy agreed to order something from the lunch menu, while I opted for brunch fare. Each of us, perhaps a bit bleary, also ordered coffee, which was constantly refilled, satisfying my inner Mr. Pink. Indeed, our server was thorough and attentive, and she answered our questions in a way that caused Kuvy to characterize her as a “true professional.”

Kuvy’s $13.95 chicken and asparagus spaghetti entree was prefaced with a bright and fresh green salad included in the price. The pasta’s asparagus was undoubtedly of the fresh variety (versus limp canned specimens), although it possessed a chewy quality that would be helped by longer cooking time. The chicken was a touch dry, but that’s the nature of skinless breast meat.

The sauce’s flavor wasn’t bad, but it didn’t reach the full-bodied level of the restaurant’s finely executed red sauces. Of course, this was a relatively healthy choice, and it’s not entirely fair to measure this dish against one heavily freighted with butter and cream. On the plus side, the spaghetti was cooked to an ideal al dente texture, with the proper firmess.

In addition to pancakes, omelets and other eggy breakfasts, Pinocchio’s also features a slate of Benedicts. Feeling the need to buck tradition, I opted for the $9.95 Benedict Pinocchio, an updated version successfully substituting medium-sized but flavorful shrimp for Canadian bacon. Additions of onion, mushroom and spinach created textural interest, as well as more complex flavor than the typical Benedict. The Hollandaise sauce’s flavor tended towards the mild (a splash more lemon juice would help), although the softly poached eggs, with their silkily fluid yolks, added compensatory richness.

The accompanying sides were also noteworthy. The hash browns were terrific, with crisp edges and almost fluffy centers, enhanced by our server’s recommendation of garlic-spiked Cholula hot sauce. A formidable hunk of pumpkin bread was both moist and shot through with tantalizing spice, making for an excellent dessert that Kuvy and I could share. This was a fitting end to our meal in a higher-end setting with family-friendly prices, and, in the case of our server, top-notch service.

Clay’s Obscurity Corner Pinocchio, before Disney The
original story of Pinocchio, penned by Carlo Collodi in the 1880s, is
considerably darker than the popular Disney version. The Jiminy Cricket
equivalent, the Talking Cricket, dies early on after dastardly
Pinocchio throws a hammer at him. And the original ending? Pinocchio is
hanged by the Fox and Cat, and left to die in the woods, even after he
implores the animals to “Look in your heart.” Actually, I made up that
last quote, but Collodi revised his work so that Pinocchio survives to
see the error of his ways, and is ultimately rewarded by becoming a
real boy.