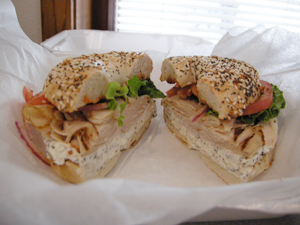 It`s been difficult for me to disassociate Boulder’s Big Daddy Bagels from the 1958 film version of Cat on a Hot Tin Roof. In this adaptation of Tennessee Williams’ Pulitzer Prize-winning play, Burl Ives’ Big Daddy was a menacing sort, the dying patriarch of a fading Southern family. Setting foot in this strip-mall bagel eatery for a late lunch with friends Kerry and Kurt, I half expected a decaying ambiance humid with dark family secrets and repression.

Instead, I found myself in a pleasant sandwich shop setting staffed by cheerful twenty-somethings, and the only hint of steaminess came from the fairtrade coffee.

Further puncturing my Southern Gothic balloon was Kerry’s revelation that a friend of hers once proposed a girls’ morning out here. The plan was that the participants would don their pajamas, drive up from Denver, and cheerfully indulge in breakfast bagels. A peculiar notion of entertainment to be sure, and my vision of Williamsian family dysfunction quickly evaporated into something out of Bye Bye Birdie.

Neither vision accurately sums up Big Daddy, which in point of fact is a fine place for a quick and relatively inexpensive breakfast or lunch. It’s not the ideal location for a date, but it’s not bad for a bite before or after a hike or bike ride. The menu is more diverse than the name indicates, as it also features entrée salads, soups ladled into bread bowls, pastries, and healthy fruit and juice smoothies.

Wanting to refuel after a strenuous hike, Kurt started off with a $2.99 smoothie of raspberries, bananas and apple juice. Kerry thought the presence of berry seeds might not be to everybody’s liking, although she didn’t object to them. Kurt lauded the homemade flavor and noted it lacked the off-putting processed qualities found in chain beverages.

Having taken the edge off his appetite, Kurt followed up with a $5.95 hummus and black bean bagel sandwich. The veggie garnishes were appropriately crisp, and the addition of hearty beans added unexpected heft, making for a filling but not off-puttingly heavy sandwich. Kerry also found satisfaction in her $6.50 Portobello Melt, which consisted of marinated mushrooms, sundried tomato spread, and her substitution of cheddar in lieu of feta and provolone. She found the portobellos expertly marinated and their meaty qualities set off by the tangy tomatoes.

My selection was the $6.99 New Yorker bagel sandwich, an archetypical concoction of lox, cream cheese, capers, tomato and onions.

Unfortunately, the kitchen was out of onions, but I compensated by ordering a bagel seasoned with the pungent vegetable. This classic delivered, with just the right amount of cream cheese complementing generous slices of lox. Fresh tomatoes were a mellowing influence, and capers offered a bit of pleasant pepperiness.

A final note about the bagels themselves: we came in the late afternoon, and so we were unable to enjoy freshly baked (a matter of hours, if not minutes) examples. Ours were a bit chewier than they would have been just out of the oven, but toasting did help. Past experience shows that Big Daddy provides bagels that balance the right blend of density, crust, and a touch of chewiness. Coupled with decent prices, it’s safe to say Big Daddy’s namesake serves as a fine foundation for a not-at-all Southern Gothic sandwich.

If I
were a less disturbed person, my point of reference for this
restaurant’s name could have been Big Daddy Don Garlits (apologies to
Big Daddy Kane fans), the father of drag racing. Garlits raced his
famed series of “Swamp Rat” dragsters to victory in three world
championships before an eye condition forced his retirement. He was
also the first driver to break seven benchmark speeds, ranging from 170
to 270 miles per hour, in the quarter-mile. Garlits returned to the
drag race scene last month at the age of 77 when he resumed competition
in a new Dodge Challenger.