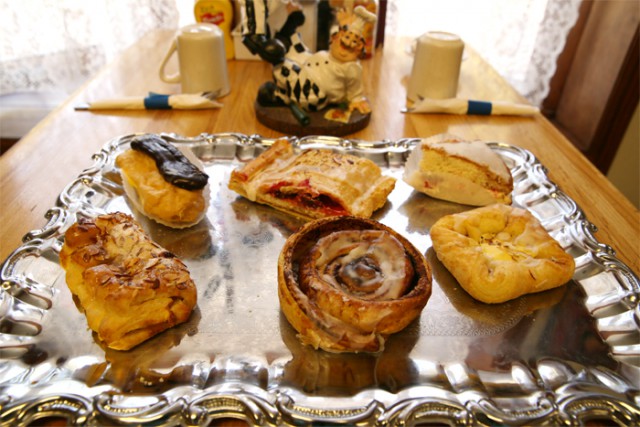 Driving through Longmont, you might notice a bright flash of orange off the side of Highway 119. That’s how it starts.

On return trips you’ll steer your eyes from the road to pick out more details: a latticework fence, paintings of sandwiches and the sign that will eventually beckon you in: Bavarian Bakery.

Inside that orange concrete box you’ll find a solid lineup of delightful delights.

The cafe serves from 6 a.m. to 2 p.m., and serves mostly breakfast and lunch diner standards like waffles, eggs Benedict and club sandwiches.

But it does feature a rotating daily special that hews closer to the European cookbook. Bratwurst Mondays beget Hungarian beef goulash Fridays and wiener schnitzel Sundays.

The bratwurst special ($9.95) this reporter ordered had a strong, smoky flavor and a pleasantly firm texture for a brat. My server said that the sausages are currently made by friends of the owner, but that it is their ultimate goal to make them in-house. With a sausage like that, it would have been nice to expand the mustard offerings beyond French’s yellow, but it wasn’t a dealbreaker.

It came with an order of handcut fries and housemade sauerkraut spiked with paprika.

The kraut was especially skillful as it wasn’t a wet, sloppy mess, like sauerkraut so often is.

A cup of French onion soup served on the side was made with a melted slice of American cheese on top (sacre bleu!), and had slightly firmer onions than the dish is typically served with, but the broth managed an especially rich beef flavor.

But the thing that really makes Michael’s Bavarian Bakery, is, as its name would dictate, the Bavarian baked goods. Pastries and ryes and streusels, oh my. It’s like some sort of complex social experiment on psychology to pick just one. Especially since the average price of a baked delight from that case hovers around $1.50, often for items that might run you $4-5 in Boulder.

I settled on a chocolate rum ball. And a custard cupcake. And a cinnamon roll.

And a slice of streusel. And something called a Napoleon Hat made from almond dough. And a massive spike in my blood sugar. A trip to Michael’s is an opportunity to completely undo your fitness regime in totality.

Of the bunch, the chocolate rum ball was my favorite, with a dense structure and a strong cocoa flavor. But picking a favorite pastry is sort of like asking a parent to pick a favorite child.

Once fully baklavated, this reporter took a box of pastries back to the office and made a lot of friends for only a couple bucks. Bonus.