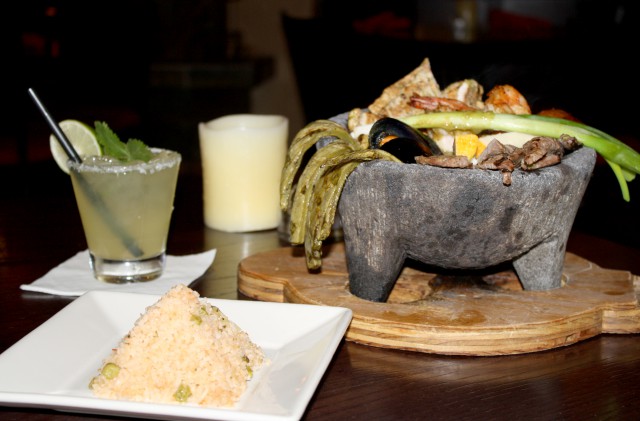 Friend Mara and I descended on 28th Street’s Agave Mexico Bistro and Tequila House for a leisurely weekend lunch. We were attracted in part by its menu, which goes beyond that of the typical Mexican joint, underscoring the kitchen’s gastronomic aspirations.

The decor here belies the strip mall location by virtue of its upscale, earthy and warm appearance, anchored by a towering fireplace. Usual suspects such as tacos, enchiladas and tamales are readily available. But there are also more distinctive offerings such as grilled seafood plates and vegetarian dishes featuring breaded cauliflower or chile-simmered cactus.

While the menu touts a $9 guacamole prepared tableside, it wasn’t available when we ordered. Instead, we had a $5 version that arrived straight from the kitchen. I don’t know what flourishes the additional four bucks would have bought us, but I suspect they might have been superfluous, as the crisp chips and creamy avocado were expertly prepared.

The trick to compelling guacamole is to balance out chile and citrus with the bite of onion and the smoothness of the avocado. Here, the pepper wasn’t apparent until after a few bites, and rather than overwhelm, it pleasantly tingled the tongue. Just enough fruit juice rounded out the flavor without being overly assertive. Had the meal ended then, I would have been perfectly content.

My benchmark dish for Mexican restaurants is Tampiquena, a combination plate of carne asada and a chicken mole enchilada. Agave’s $14 version took things a step further with the addition of an intriguing corn on the cob in a cream sauce dusted with red chile. Another side was mashed potatoes topped with green chile, a winning combination. Had the spuds been a bit warmer, it would have been perfect.

The steak arrived rare, as requested, and while it could have used a whisper less salt, it had the earthy savor synonymous with well-prepared carne. A layer of melted cheese contributed richness and added a pleasantly chewy contrast to the beef ’s tenderness. Unlike most mole preparations, the sauce complementing the tender poultry lacked the bitter tone common to lesser versions, and the whole enchilada went down easy.

Agave’s full ambition manifested itself with Mara’s choice of the $22 Molcajete Cancun. A molcajete is a heavy stone bowl, resembling a mortar, with little legs and formidable heat-retaining capabilities. In this case, the molcajete held what one might describe as a South of the Border bouillabaisse, anchored by a mild green chile base. In addition to generous slabs of fish, meaty shrimp and mussels, there were tart strips of cactus, adding a seldom-encountered flavor accent.

As the dish arrived piping hot, our professional but hospitable server advised us to mix in chunks of cheese so they would melt into the broth. Overall, the dish neatly balanced spice, veggies and seafood to create a satisfying stew. While Mara felt it could use a bit more salt, she said, “I like the mix of fish, chile and bubbling cheese — I’m also thrilled it’s not too spicy.”

The unique sides accompanying the Tampiquena testify to this eatery’s ambition to provide more than just the typical combo plate. Dishes like the molcajete provide even more compelling evidence of Agave’s ability to combine the best elements of traditional Mexican restaurants with a fresher gourmet sensibility.