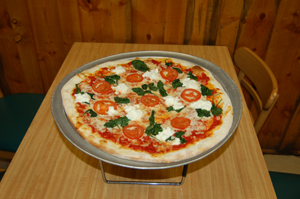 O! Pizza serves up Philly pie with a Boulder twist

For many cities, pizza is a wellspring of civic pride. New York touts its thin crust pie, which some say receives a flavor boost from the mineral kick of the Big Apple’s famed tap water. Chicago’s known for deep-dish pie with a crust that rises like a dam to restrain chunky tomato sauce and masses of gooey cheese. Detroit’s twice-baked pies come in a distinctive square shape, while a New Haven, Conn., pizza comes with a smattering of parmigiano vs. a heavy gilding of mozzarella.

Taking a seemingly different tack, North Boulder’s O! Pizza positions itself as an outpost of Philadelphia-style pie. When I asked the woman at the counter what distinguishes Philly pizza from the others, she confided it wasn’t all that different from New York-style with its understated crust. That said, the streamlined menu superficially resembles that of an archetypical East Coast pizza joint, with pies, strombolis and meatball subs. But O! also accommodates a variety of dietary styles, offering a vegan pie made with soy cheese. There’s also gluten-free crust, composed of corn and tapioca.

Besides build-your-own options, there’s a selection of specialty pies such as a meat lover’s combo consisting of sausage, meatballs, pepperoni and salami. I was torn between two of these: the spinach lasagna and the white pie. When I asked the counter staff what they liked best, one answered the lasagna, while the other answered the white. This impasse was broken when one suggested the Solomonesque solution of combining elements of the lasagna and white pies.

Waiting for our pizza, pal Amy and I enjoyed our

sodas in the unadorned but friendly setting, punctuated by a pleasing Johnny Cash soundtrack. Not unexpectedly, Amy ordered up a $12 12-inch, gluten-freecrust pie topped with soy cheese and mushrooms (a dollar extra for this topping). Upon her first bite, Amy stated the obvious, proclaiming, “This tastes like vegan pizza.” Indeed, it did, which is to say not very much like traditional pie. While Amy declared the mushrooms fabulous, the roughly textured crust didn’t hold a candle to that of O!’s conventional version. Soy cheese lacked the hefty mouth-feel of its dairy analogue. This isn’t to say that the vegan pizza is bad, it just paled in comparison to my choice.

And what of that pie? My $11.99 12-inch pizza arrived at the table topped with an authoritative mix of fresh tomato slices, extra virgin olive oil, spinach, mozzarella, ricotta and ample garlic, which in my book counts as a major food group. At first, I thought the toppings were a bit watery until I realized that the liquid on my tongue was olive oil. The crust was pleasantly thin without being cracker-like, and the lightness of this foundation allowed the fresh flavors to shine through. While the toppings might not have been the most sophisticated, it provided a comforting and tasty respite from the evening’s chill, much like a good bowl of macaroni and cheese.

While these pizzas might not be the cheapest in town, they are worth the extra cash compared to chain offerings. Additionally, O!’s offers a pizza “stimulus” deal on Sunday and Monday nights, when a 12-inch cheese pizza is available for a fiver. This bargain would make for a fine introduction to this welcoming neighborhood spot.