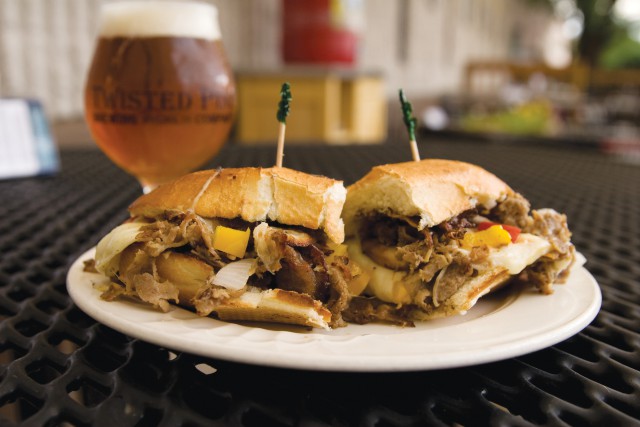 Back in the ’80s, before microbreweries and tap rooms had entered the public consciousness, my parents and underage self took a tour of Washington’s now-defunct Olympia brewery. While I recollect that the bar at the end of the tour was an ornate carved wood affair, there was no food to accompany the beer. I suspect the desperate could have purchased beer cookies in the gift shop. Nowadays, many self-respecting breweries offer something to sink one’s teeth into, and Boulder’s award-winning Twisted Pine Brewing Company is no exception.

Friend Keith and I started lunch off with a $3.50 plate of Chips and Salsa de Guillermo. This appetizer’s name presumably stemmed from the fact that this dip featured reclaimed peppers from the popular Billy’s Chilies, the somewhat incendiary wheat beer. For another two bucks, we added a portion of salsa’s comrade-in-arms, guacamole, although here the avocado spread comes augmented with, wait for it, a beer infusion.

At first bite, I noted the salsa carried a note of fermentation, which probably shouldn’t have been surprising. However, it took me a moment to become accustomed to this unexpected tang. The repurposed chiles packed real heat, which was a pleasant contrast to the insipid qualities of less aggressive salsas. As for the guacamole, it successfully melded the chunky and creamy, and the subtle addition of beer rounded out, but did not overwhelm, the smooth flavor.

East Coaster that Keith is, he ordered the $8 sandwich known as Some Dude Named Phil. While the name’s a bit of a mouthful, this choice was nothing more than a straightforward Philly Cheesesteak. In this instance, Phil was smart not to stray too far from tradition, as the sandwich consisted of a pleasantly pillowy hoagie roll encasing chopped steak, mushrooms, onion and bell pepper from Platteville’s 2R Farm. The kitchen here understands that the cheesesteak is more than a light repast; it’s really a comforting indulgence. On this score, Twisted Pine’s Phil succeeded by piling on moist beef with plenty of gooey cheese for a more than satisfying nosh.

For $9, I enjoyed the Flame Feathers pizza, and happily, each of its literal namesake elements was conspicuously absent from this pie. Instead it contained chicken infused with Billy’s Chilies beer, giving it a peppery profile similar to buffalo wings, but without the off-putting bite of vinegar. A slathering of tangy BBQ sauce counterbalanced the heat, and plenty of mozzarella and cheddar added smooth dairy richness. While I found the crust a mite soft for my taste, it compensated for this small shortcoming via its rustic hand-tossed appearance and full-bodied yeasty flavor.

Twisted Pine goes several steps beyond breweries of yore by serving beer-infused offerings that are a pleasure to eat, even if they aren’t accompanied by an ale. Additionally, generous portions that won’t break the bank make for an excellent value in a convivial setting perfect for a casual lunch or after-work decompression session.