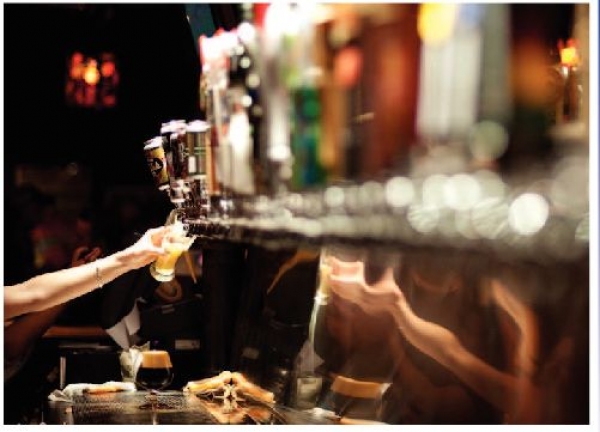 For many food lovers, pairing wine with certain foods is a common way to enhance your meal. But like wine, beer can be used as a promising complement to many familiar dishes.

On nights when you’re not in the mood for a glass of merlot, or if drinking wine is not your style, picking a beer to enjoy with your meal may be right up your alley. The idea of combining beer with food may not seem as sophisticated, but this grouping is a simple way for chefs like David Spirito, corporate chef for Baker St. Pub & Grill in Boulder, to show how a cold pint of beer can help blend flavors in a dish or can add some vigor to a meal that otherwise may be lacking. “We suggest our guests consider ales as if they were a white wine and lagers as if they were a red wine,” Spirito says.

Beer exceeds in many areas where wine falls short, pairing well with salads and spicy food. Some wine experts have strict rules when it comes to pairing certain wines with dishes, while the beer backers are more laid-back, letting the ale lead the way. Brian Hutchinson, the head brewer at Boulder’s Mountain Sun Pub and Southern Sun Pub & Brewery, explains the technique behind the beer and food pairings.

“At the Sun we will do trial pairings,” he says. “We have learned over time that our initial ideas are not always spot-on, and we often need to re-work the dish or change the beer for the pairing.”

Experimentation is common for a lot of restaurants and beer connoisseurs, as it allows people to mix it up and test the options before they find what pairings they enjoy.

“People tend to take more time to really taste the meal and think about the beer. The right pairing will highlight the strengths and subtleties of both the beer and the food. We tend to brew very flavorful beers, and I believe they are most enjoyable with a complementary dish,” Hutchinson says.

For people who are new to food and beer pairing, deciding which types of foods work best with which kinds of beers is a tasty trial of choices. It’s an investigational, ever-evolving experience for the thirsty, but where to begin?

“Think about how you would like the beer to relate to the food,” Spirito says. Beer has a wide range of flavors, textures and aromas, each with its own dominant set of characteristic tastes. This gives beer the ability to harmonize with almost any kind of food, from a spicy Cajun platter to chicken fried steak or fish and chips, from your backyard barbecue to dinner at a five-star restaurant. Hutchinson says to pick a strategy, whether it’s matching or contrasting flavor components, and generally the assertiveness of the beer should match the assertiveness of the dish.

Looking for the right flavors in a beer to highlight your food of choice is what will give you the best results for your meal overall. According to Chad Melis, marketing director at Oskar Blues, many similar flavors and ingredients are in both their beer and their food.

The four universal ingredients in beer are hops, malted barley, yeast and water, and knowing how these ingredients add up in your beer of choice plays a part in pairing it to the right food.

From pilsners to stouts, beers’ wide range of ingredients are major factors in pairing the beer of choice to the right meal, and vice-versa. A crisp, clean pilsner makes a great contrast for buttery, creamy meals, but complements meals with sweet, citrus flavors. But it is quite the opposite for stouts, which complement the rich, butter-soaked dish and contrast the citrusy tastes.

“People may not realize that something as common as a pale ale can go nicely with our fettuccini alfredo,” Spirito says. “The ale’s ‘hoppiness’ actually accents the seasonings found in the alfredo sauce.”

There are many possible combinations when it comes to putting beer and food together, and the number of beers and ales on the market keep growing, giving us more options to improve our dining experiences.

“Guests at Baker St. Pub & Grill find that dishes are simple, comforting and incredibly beer-friendly. We mix and match different beers with various entrees. Don’t be afraid to experiment, find what flavors you like, and go with it,” Spirito says.

Coupling food and beer can be similar to picking out diamonds, but rather than the four C’s — cut, clarity, carat and color — beer and food combos focus on three: cut, complement and contrast.

“For example, a popular item at Baker St. Pub & Grill is our Shepherd’s
Pie, a hearty entree consisting of layers of seasoned ground sirloin,
sautéed vegetables, buttery whipped potatoes and cheddar cheese. To
‘complement’ the rich, hearty flavors in the dish, order a heavy beer
such as a Black Butte Port. If that is too heavy for your palate, you
can ‘cut’ the buttery flavor of the potatoes by serving it with a
light, hoppy beer such as a pilsner or pale ale,” Spirito says.

In
order to “cut” a dish, you aim to counteract the prominent flavors by
choosing the right beer. One way to do this would be to choose a
lighter beer with more hops if the dish is heavy with butter or thick
and creamy, balancing out the taste. If you want to complement a meal,
you match food and beer that have similar tastes. Certain beers and
foods have love-at first-taste as natural pairings. Grab a strong stout
when you have a sweet tooth, as the roasted malt flavors found in the
stout go great with sweet desserts and chocolate. Pairing also works
well when the flavors are in contrast, similar to “cutting,” but you
emphasize pairs that are noticeably different. Some beer can overwhelm
the flavors in the meal when trying to contrast the pairing. Wheat
beer’s strong hints of yeast contrast well with a light pasta dish.

Throughout
the Boulder County area there are many breweries, like the Mountain Sun
and Southern Sun, which brew more than 50 different beer recipes, Oskar
Blues, with 43 different craft beers on tap, and Baker St. Pub and
Grill, which offers more than 40 different draught beers, and almost every item on the menu
can be paired with a beer. Father’s Day is a perfect chance to test out
your beer and foodmatching skills and impress the old man while you are
at it.

“Learned
behavior shows wine being the choice to match with food, but there are
only a handful of wines, and there is such a variety of beers, allowing
us to have 2,000 different profiles for beer and craft beer [and]
unlimited options,” Melis says.

Wine
may be more urbane, but from pizza to oysters and pale ales to porters,
you can almost never go wrong with an ice-cold brew in hand, balanced
with a great meal and good company. Melis says, “We focus on the
celebration of beer’s culture and diversity, giving more options and
experience with liquids and solids, to broaden horizons to what craft
beer can offer.”

“There
are a lot of unchartered flavors that haven’t been explored yet by most
chefs. Beer will always have a casual and social connotation associated
with it, so next time you are out to dinner with some friends, pass on
the bottle of wine and see what beer pairing you can come up with,”
Spirito says.