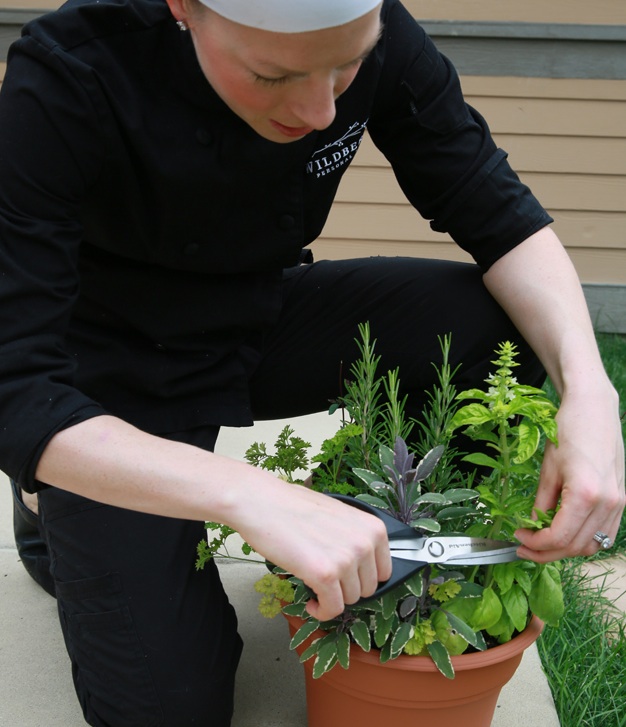 The route Christiana Scott took to owning a personal chef business, one that currently enjoys much more demand than supply, is similar to those of a lot of people in the food business. She found her passion, went to culinary school and started cooking professionally.

But Scott, like many women in the food industry, had to elbow her way through a professional scene that wanted to pigeonhole her.

“I didn’t want to make cupcakes, that’s not my thing,” Scott says. “I think particularly to be a woman in this industry, you have to be pretty tough and advocate for yourself, otherwise you will get pushed aside. I think I was comfortable doing that because I was so sure of what I wanted to do and how important it was for me to learn those skills.”

Scott is the sole proprietor and chef at Wildberry, a personal chef service in Boulder County. Her lineup of clients includes five families, and she visits and prepares a week’s worth of meals at each family’s home.

Home cooking has always been important to Scott.

“I grew up with parents who were really amazing cooks,” she says. “Never professionally or anything, but I grew up with that sort of being part of life, that we sat down and ate dinner together every night and cooked dinner on weekends.”

Scott grew up in the Boston suburbs and remembers her dad cooking lasagna Bolognese and boeuf bourguignon, “those things that take a lot of time to cook during football on Sundays.”

Those early memories served as the foundation for what would become a career for Scott.

“When I got to college, I came to the realization that not everyone ate like we did,” she says, adding that while training for a marathon, she realized how important food was to healthy athletes and how few knew how to make it work in their lives.

So Scott went to Cook Street School of Culinary Arts, an intensive five-month program that caters to adults who already have college degrees. The goal was to “get experience in some of the things I didn’t have growing up,” Scott says, but she knew from being around athletes that she wanted to cook food on an individual basis.

The self-agency of running her own business appealed to Scott, too. Though her days are busy, she controls everything from the menu generation to sourcing to cooking; things that brick and mortar restaurant positions wouldn’t offer her for years if she were interested.

A typical day for Scott starts with a grocery list. She’ll have gotten a menu approved by one of her clients a couple days prior, and on the cook day, she looks over the menu, plots out ingredients and goes to Whole Foods. Scott has a library of staple spices, oils and other standards, and selects produce and meat on the day of cooking.

Once the shopping is complete, she heads to her client’s house, where she spends anywhere from four to eight hours preparing the week’s meals, often with multiple dishes going on in multiple appliances. That’s a skill unique to the personal chef.

“When I first started I wasn’t comfortable having so many things going at once. Especially if you’re searing fish, it can get overcooked in a matter of seconds, so I wasn’t comfortable. I would sit there and watch the fish. Because if I overcook it, I have to go back to Whole Foods and buy it on my dime to make sure it was right for the client. I think in order to avoid that, the cook day took a lot longer,” she says.

Scott will cook things according to when they’ll be eaten in the week and leave detailed instructions on how to reheat items. Steak, for instance, will be cooked a temperature below what the client requested so that it’ll finish in reheating. But since she’s not there to see the job out, there’s a bit of trust she has to put in the folks eating her food.

“I don’t know what happens,” Scott says. “Sometimes it’s like well, maybe they murdered the steak in the microwave, who knows? I just try to set them up for success and make it as good as possible.”

At the end of the day, Scott cleans the kitchen and leaves. At home, she’ll spend up to two hours doing paperwork on the business side and developing menus that are different from what she’s cooked recently for families. That process starts with a questionnaire she gives clients, asking them to determine what foods they like and don’t like. There’s some art in that — if people say, “I don’t like Mexican food” (which is a ridiculous thing to say), Scott will try to find what it is about their perception of Mexican food (usually that it’s unhealthy or too spicy) and develop dishes to emphasize flavors of that cuisine in a format that pleases the family.

“To be in the culinary industry, you have to have a thick skin,” Scott says. “You just have to be OK with the fact that you can execute a dish perfectly according to how it’s supposed to be done and somebody just may not like it.”

Scott’s now faced with the challenge of expanded her business. One of the issues she knew she’d face eventually was that her most valuable resource is time. There are just not a lot of extra shifts she can pack into her business. That means she’ll likely bring in another person to start expanding the operation.

Though she doesn’t work in restaurants, Scott’s business is undoubtedly a product of the local restaurant scene, and the impositions that it puts on women. Scott, for instance, said one of the reasons personal cheffing appealed to her was because she wants to have a family some day, and there’s “no maternity leave or any of that stuff that you sort of come to expect in other jobs.”

She’s also taken on the role of mentor to up-and-coming female food professionals, because that’s how she progressed. She also knows that the uber-masculine culture of restaurant kitchens has dissuaded women from advancing their careers there.

“I think I’m one of them,” Scott says. “If the culture was different, I would’ve really valued just having another set of experiences, working in kitchens. So I hope for future generations that changes. Not that it has to be all puppies and rainbows — there’s time pressure, there’s knives, there’s fire. There’s a lot going on in the kitchen … but I think the prevalence of harassment that women face is different from other industries. And there’s no HR department, it’s just sort of accepted.”

Boulder, like many other places, has a severe lack of women in kitchen positions. Though gender equality is often talked about in corporate settings, Scott says it’s not something she hears brought up a lot in the restaurant industry.

“You hear ‘is this restaurant organic,’ or ‘where are they getting their ingredients,’ but not a whole lot about the people behind the curtain, so it’ll be interesting if that starts to change or whether it’s just kind of status quo,” Scott says.

For Scott, the growth of her business doesn’t just mean more clients, more money and more opportunities to cook, it means the elbow room she’s carving out for herself in the food scene is getting bigger, too.