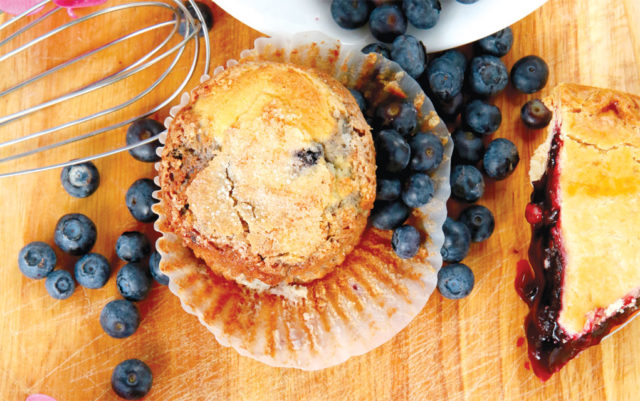 The Blueberry Man always showed up at the back door of my childhood home on hot summer Saturday mornings. I never knew the name of the stooped older man in worn overalls who walked the neighborhood offering freshly picked wild blueberries by the cup from a full tin pail. I didn’t appreciate how hard he had worked until I tried to pick enough wild blueberries for just one pie and ended up a sore, sweaty wreck.

On those summer mornings I wasn’t interested in cereal. I would fill a bowl with those tiny berries, add cold milk and an obscene amount of white sugar. It’s one of those pure, simple combinations that can’t be improved.

Occasionally Mom would escape her four kids at home and run away to Boston to get her hair done and shop. Guilt would prompt her to bring home gigantic, sugar-crowned blueberry muffins from the department store Jordan Marsh that were nearly purple inside.

Years later, wild blueberries are a hip superfruit, but the only fresh berries we saw in Colorado were those gigantic but hugely flavorless commercial varieties. Yuck. Recently I have tasted some decent but pricey commercial organic blueberries. Blueberries aren’t as standardized as other berries, so what you see in the produce department is really a succession of varieties grown in various places as the season progresses. If you find fresh berries you like on sale, buy lots of them and freeze for later. My solution is to use frozen wild blueberries. The best I’ve found are Wyler’s, available at Sprouts.

Recently I stumbled across a recipe for those famous muffins at a great site: kingarthurflour.com. I was incapable of not tweaking it, especially cutting the sugar and salt load, adding maple syrup and lemon zest, and using some frozen and some fresh berries.

Preheat the oven to 375 degrees. Lightly butter a 12-cup muffin tin, or line the tin with buttered baking cups. In a bowl, beat the butter and sugar until combined. Add eggs one at a time, scraping the bowl and beating well after each addition. Beat in the baking powder, salt and vanilla, then add the flour and milk until just combined. Mash 3/4 cup of blueberries and stir into batter, then add the whole berries. Put heaping 1/4-cupfuls into the muffin pan. Sprinkle on the sugar, or better yet drizzle a tablespoon of dark maple syrup on the top of each muffin. Bake for about 40 minutes, until golden brown on top. Remove the muffin pan, loosen the muffin edges from the pan and transfer them to a rack to cool. Yield: 12 large muffins.

(If you’d rather bake a memorable blueberry pie, look for a recipe and tips in my blog at: johnlehndorff.wordpress.com.)

Going to the goats

It’s hard not to be charmed by the ramshackle Broken Shovels Farm located in a forgotten piece of Commerce City near I-76. Owner and cheesemaker Andrea Davis produces some wonderful goat’s milk cheeses and yogurt, but her mission is to rescue any animal. So the farm’s menagerie includes cows, turkeys, cats, rabbits and lots of cute goats. Davis welcomes visitors every Sunday from 1-3 p.m. for a market and free animal cuddling session. Details at brokenshovels.com.

Denver-based Apollo Peak has introduced a “wine” for cats in non-alcoholic Pinot Meow and Moscato made from organic catnip and beets. The price tag for a “mellow” feline: $4.95 for a 1.6-ounce “Single Tasting.”  … Gordy’s, a Washington, D.C.-based pickle company, has just released Fine Brine, spicy sip-able pickle juice in a can. … Australia’s Maximus Co. has released a tomato sauce-flavored sports drink called Pie Mate designed to wash down a pastry-wrapped meat pie.

It’s far from a fancy place, but the intensely flavored grilled chicken wings are well worth a trip to Edgewater and US Thai, 5228 W. 25th Ave. The kitchen pulls no punches when it comes to authenticity and bringing the Thai chile heat to wings, soups, curries and noodle dishes. If Thai iced tea won’t chill the fire, get takeout and bring it to the nearby Joyride Brewing Company for a cool one.

“Grilling, broiling, barbecuing — whatever you want to call it — is an art, not just a matter of building a pyre and throwing on a piece of meat as a sacrifice to the gods of the stomach.”

John Lehndorff is the former food editor of the Daily Camera. Read his blog at: johnlehndorff.wordpress.com. Lehndorff hosts Radio Nibbles at 8:25 a.m. Thursdays on KGNU (88.5 FM, 1390 AM, kgnu.org).