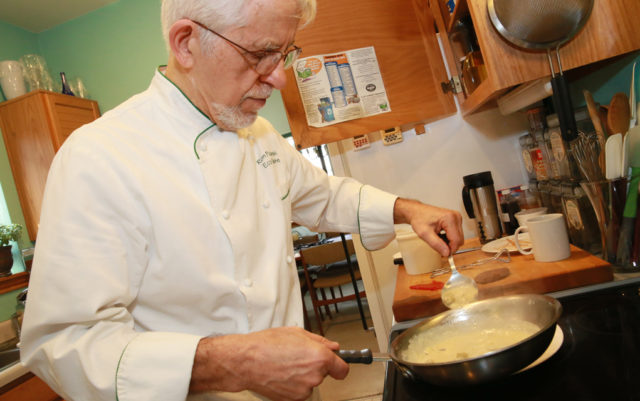 Vegans are hard to find in much of the United States. Not so in Boulder, a town awash in vegans and vegan-friendly folks plus lots of vegan food companies, vegan cafes, vegan menu items, buffets and cooking classes. Yet chances are most locals have never heard of Ron Picarski, the person in Boulder who may be having the most impact in promoting a healthy, meatless diet in the United States.

Last year Picarski spoke at the United Nations about the health benefits of a vegan diet, and its potential to fight world hunger. The classically trained chef feeds hundreds of thousands of people heart-healthy vegan fare every year, but you can’t buy his Eco-Cuisine products at a supermarket. You won’t find his name on a restaurant menu.

It would be easy to pigeonhole Picarski, a former Franciscan monk, as one of those strident purists preaching the vegan gospel, but the stereotypes don’t fit. One of his products is designed to mix with ground meat. He graduated from culinary school and earned his meat-cutting certification after he became a vegan. In 1976, nobody knew what the word meant. “I cut and cook steaks for my lovely wife, bacon once a week,” he says with a broad smile.

The east Boulder home he shares with landscape architect Nancy Loving doubles as his corporate headquarters and research facility. The refrigerator is jammed with examples of his food research making everything from chicken curry and a spot-on Salisbury steak to a natural, vegan and kosher fruitcake.

Q: You are passionate about animal-free cuisine but you are very accommodating to cooks who aren’t.

A: I believe in being vegan, but I know human nature. Listen, we’re omnivores — we have teeth for meat and grains. We have moved too much too far to the carnivore side. I’m trying to move us back on the herbivore side.

A: I grew up in Petoskey Michigan, on the shores of Lake Michigan. When I was 12 years old my mother opened a really busy diner and I started working there. She already had a reputation as a great cook, especially the traditional Polish favorites.

Q: How did you end up studying to be a Franciscan monk?

Q: What led you to become vegan versus simply vegetarian?

A: When I started in the order, my health wasn’t good. I had a lot of lung problems. I started on a diet, not vegan but healthier, and began to lose weight. The first time I went home my parents almost didn’t recognize me. In early 1976, I gave up eating meat but not eggs and dairy. I felt even worse so in October ’76 I became a vegan. I’m 69 years old now and healthy. I just had my annual physical. I’m not on any medications.

A: I started working in the seminary kitchen and that’s when I started really getting into cooking. I talked the order into letting me take classes at a professional culinary school and I really developed my skills. I also started studying nutrition. I passed the meat-cutting exam after I became a vegan. I would taste the meat and then spit it out and wash my mouth out.

Q: What led you to leave the Franciscans?

A: I wanted to compete in the International Culinary Olympics in Germany in 1980 and my monastery refused. I thought the Olympics could bring vegan credibility as a cuisine worthy of a five-star restaurant. I competed and eventually won and my efforts made a difference. Sixteen years later, the International Culinary Olympic Committee made a vegetarian category mandatory for all teams.

Q: What does your Boulder company Eco-Cuisine make?

A: I call it “speed-scratch.” I have created dry cooking and baking mixes for restaurant, university and hospital foodservice and supermarkets that are vegan, natural and kosher. I do a lot of on-site teaching. I’m working with Rice University to develop their vegan menu because of an increased demand from staff and students. The products are shipped in 25-pound bags.

Q: How many people eat your food every year — vegan and non-vegan?

A: Vegan is a big market if you include people adopting heart-healthy and wellness diets. It’s hard to estimate but certainly at least 100,000 judging by our orders and shipments.

Q: Vegan meat substitutes have had a less than savory reputation flavor-wise?

A: That has really changed in the past few years. I have tried to apply classical chef techniques to making center-of-the-plate entrees like a piece of meat or fish. I use protein from pulses: beans, peas and lentils in my mixes that can be infused with flavor as chicken, beef or pork and sautéed, steamed, baked or grilled. You want the right chewiness, that textural experience, and what we call “lubricity.” That’s the creaminess that requires fat. My Mixed Medium product is designed to be 35 percent meat and 65 percent mix for meatloaf, meatballs and sausage.

Q: Do you have any food vices left?

A: Yes, good natural potato chips — reduced fat and salt. I like to eat them with raw carrots.

Q: What does the future hold for you and vegan food?

A: I also earned my teaching accreditation and my passion is for education. I wrote a cookbook in 2015 that has become a textbook, The Classical Vegetarian Cookbook For Professional Chefs and Inspired Cooks (Eco-cuisine.com). I want to take people to a place where they are eating and feeling better. We need to be responsible for our own health and not put it in the hands of doctors.

Originally opened in 2013, Radek Cerny’s L’Atelier is closing in Boulder this month. It will reopen as Atelier by Radex in Denver. Cerny previously operated the European Café in Boulder, Le Chantecler in Niwot and Denver’s Papillon Café. … The 28,000-square-foot restaurant and game venue, Wild Game Entertainment Experience, has opened at 2251 Ken Pratt Blvd. in Longmont. … La Revolución Taqueria y Cantina has closed at 701 Main St. in Louisville.

“If you reject the food, ignore the customs, fear the religion and avoid the people, you better stay home.” — James Michener