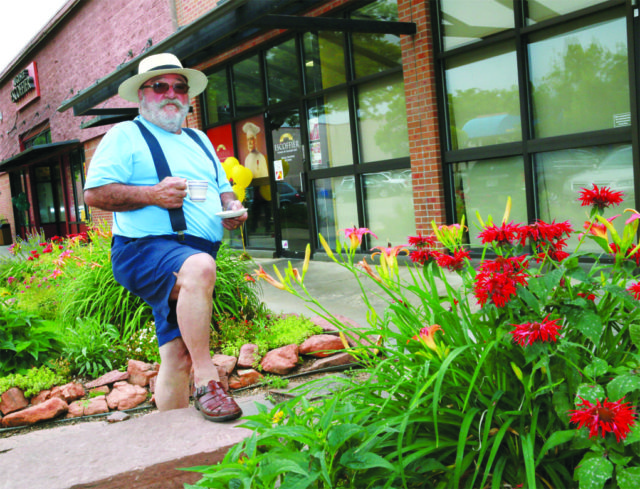 It’s hard to miss Antonio Laudisio at the Boulder County Farmers’ Market where generations of customers have lined up for his smoky pizzas and Polenta Boulder with spinach, three cheeses and an assertive tomato sauce.

Laudisio is not a big man, but he is an imposing presence with his curled-end white moustache and that Brooklyn-meets-Miami accent. He has been a guiding culinary presence in Boulder for over a quarter century.

Laudisio has also lived a large, nearly cinematic life that informs the way he makes pizza, at least the way he tells it. He’s a blue collar guy who speaks five languages. Everybody is visiting Cuba now but Antonio Laudisio bicycled across Cuba while Castro was taking over the country.

His Italian immigrant parents opened a bakery near the Brooklyn Bridge. “Al Capone used to come in for bread. My dad got tired of the winters so we moved to Miami when I was about 11,” Laudisio said. On the menu at the Miami restaurant: a flan recipe shared by Ernest Hemingway’s chef.

With his brothers Raimondo and Leonardo, he opened Laudisio Ristorante Italiano in 1989 (where Arugula Ristorante is located now). At the time, Boulder was far from “the foodiest little city in the U.S.A.” and completely off the culinary radar. Still, Laudisio was voted the Best Italian Restaurant in Denver, much to the chagrin of Denver’s Italian restaurateurs. The restaurant moved to Boulder’s 29th Street Mall where it closed in 2013.

At 76, Laudisio still co-owns The Mediterranean Restaurant with the Romano family who also operate Brasserie 1010 and Via Perla. “We still put out 100 (orders of) paella every day at The Med,” he brags. His main focus is on Laudisio Mobile, a catering service with four portable wood-burning ovens. He said people ask him every day if he’s opening another restaurant. “Maybe, if I own the place … and it’s on a farm,” he said.

I first met Antonio when he opened Laudisio Ristorante and I was the Daily Camera’s food editor. We talked recently at Boulder’s Caffè Sole where several of his former employees work. “I’ve got cooks working all over the country in good kitchens,” he said.

Q: How did you come to build a portable pizza oven?

A: I love equipment. I like building it, running it. I’m a hands-on guy. We built the first mobile wood-burning pizza oven — that I know of — in the country. It was for events for Community Food Share. I’ve always wanted to give back to the community that has been so tolerant of my, uh, exuberant lifestyle.

Q: What made your restaurant special?

A: It was a traditional restaurant serving Italian New York food, but it reflected the local ingredients here. It was veal-centric with fresh pasta cooked to order. We were one of the first places in town to serve risotto. All of the people didn’t know Italians ate rice, too.

A: I always wanted what was local. You should eat food as close to where it is grown as possible. We were serving local beef years ago. Why use lamb from New Zealand when you have great fresh Colorado lamb?

A: You have to get your ego out of the way and not add a lot of stuff. All a great piece of meat needs is a little salt and lemon. Also, you have to learn the rules of cooking before you get to break them.

Q: How did you end up in Boulder?

A: My wife Pat and I met in Paris. I was living in a VW bus at the time in Europe to avoid the Vietnam draft. In 1970, we came out to visit my friend John Bizzarro (longtime owner of John’s Restaurant). I’m a sailor but Pat is an equestrian. It was the horses that decided it. I went to farrier school and learned how to shoe horses.

Q: How did Boulder become a sophisticated culinary destination?

A: Even in 1989, the kind of people that make a food place work were living here. It’s a university town with educated people, people who have travelled a lot and care about where their food came from. The Farmers’ Market really helped the process and introduced Boulder to fresh ingredients from here that weren’t adulterated, like tomatoes picked when they were ripe, not gassed.

A: The problem with recipes for Italian dishes is that cooks codified something that had always been improvisational and changed depending on the ingredients available.

Q: What was the favorite dish your Mom cooked for you?

A: Definitely spaghetti and eggs. It was pasta with crisp eggs, a lot of Parmesan and love.

Here is Antonio Laudisio’s recipe for Spaghetti with Eggs from               La Famiglia Laudisio: The Cookbook.

Bring salted water to boil in large pot, add spaghetti, cook until “al dente” … that means “firm to the tooth” … not soft! Heat olive oil and garlic over medium flame in a large skillet. Be careful not to brown the garlic because that will give it a bitter taste. Add eggs and fry carefully over medium heat, with yolks not runny, but slightly firm. Drain pasta, reserving pasta water on the side. Put spaghetti in the frying pan and slowly add pasta water (to just moisten, not soak). Toss gently with eggs and garlic, then the Parmesan, crushed red pepper and basil, salt and pepper to taste. Serve hot and sprinkled with parsley on a warmed platter. Yield: About four servings.

If you grew up with a parent from central Europe like I did, you know about heavy bread — dark brown loaves of mostly whole wheat berries and seeds, think pumpernickel on steroids. I was happy to discover a tastier heavy bread hiding behind luscious Danish pastries at Taste of Denmark, 1901 S. Kipling St., Lakewood. Their weighty multigrain bread is dense with sunflower seeds, flax seeds, wheat berries and a little flour. The bakery recommends leaving the loaf unbagged on your counter for a couple of days to dry out before you slice it thinly. Toasted it’s delicious, and it comes with a high fiber halo.

“What we need is a system of graduated fines and perhaps short jail sentences to discourage the production of totally depressing baked goods. Maybe a period of unpleasant and tedious community service.”