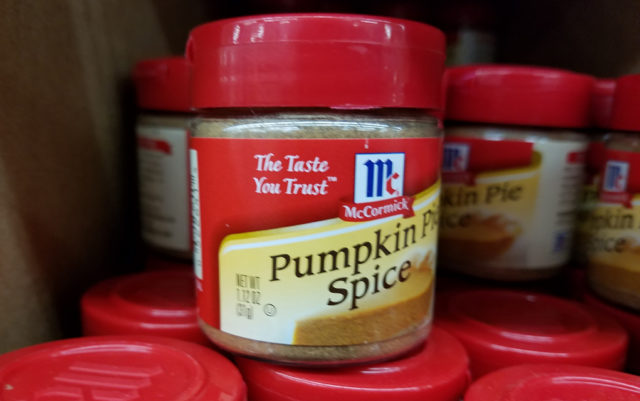 They have been lying to us for decades. Almost everything we think we know about pumpkins, pumpkin spice and pumpkin pie is WRONG. There are lies being perpetuated in the supermarket aisles, at bakeries and especially coffee houses. 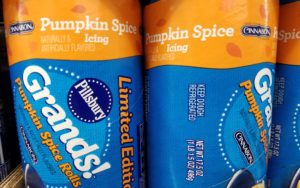 The thing is, most people don’t like pumpkin pie and have never actually tasted pumpkin in their life even if they have “pumpkin” pie once a year on Thanksgiving. Libby’s, the company that produces most of the canned “pumpkin” pie filling in the U.S., actually uses Dickinson winter squash, a relative of butternut squash.

Recently a sign at a local supermarket read: “Canned pumpkin supply is currently out. We are looking for the new batch.” Don’t worry. This year’s supply is coming in. Or you can roast a kabocha squash to make the best-tasting “pumpkin” pie.

I am not a fan of flavored coffee drinks because of the cost, calorie-load and sweetness, so I was not inclined to love Starbucks Pumpkin Spice Latte. These are my notes after my first taste:

“My goodness what a beverage abomination! It’s just so sickly sweet and viscous with an odd orange hue. There’s a hint of nutmeg and allspice but overall the spice is barely there. Overall the flavor of Starbucks is reminiscent of supermarket pumpkin pie with Cool Whip. What’s wrong with this picture?” 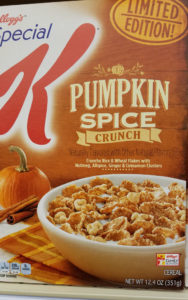 Statistics from Starbucks show that fans have purchased more than 200 million Pumpkin Spice Lattes since the coffee conglomerate introduced the drink in 2003. I recommend reading the fine print. According to Starbucks, the Pumpkin Spice Latte is a dessert with up to 650 calories each, containing the following ingredients:

Maybe you can get a nonfat latte and sprinkle it with pumpkin pie spice? 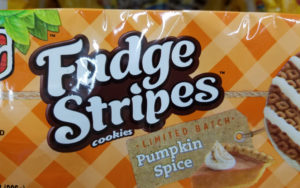 By the way, pumpkin spice doesn’t grow on a bush. The traditional ground pumpkin spice formula is: 6 parts cinnamon, 1 part nutmeg, 1 part ginger, 1/2 part allspice, 1/2 part cloves. I hate cloves so I cut it to almost nothing, add vanilla and increase the ginger.

Note: Starbucks was attempting to mimic the taste of pumpkin pie in its coffee drink, but those, when made with canned pumpkin like Libby’s, are actually made from winter squash. Transparency requires that Starbucks rename it as Winter Squash Spice Latte.

Nibbles reader Scott Lane of Prescott, Arizona, recently wrote a letter published in Boulder Weekly taking exception to my column on whole animal butchery. You can read the entire letter in the Sept. 15 issue (boulderweekly.com/opinion/letters/letters-91516). Lane detailed the advantages of a vegan diet, including this comment: “You can eat fruits and veggies all day long and only get healthier, but try eating pork all day long and see what happens.” I think either extreme is unhealthy.

Lane seems to misunderstand my job. “Newspaper and magazine writers want to feel good about where their meat comes from, when they should feel good about not supporting the meat industry,” he wrote.

Nibbles is a personal column I’ve been writing since 1995 that happens to be about food and what I eat. I do consume some flesh and I do feel good about where it comes from, at least most of the time. Mainly, I support good people locally who are doing the right thing with all kinds of food, animal and vegetable. I also love getting mail at: nibbles@boulderweekly.com.

Fresh Thymes Eatery is opening a takeout shop at 2690 28th St., former site of the Organic Dish. … Pupusas Sabor Hispaño may be shuttered but the chef and some of the fare live on at Wapos Mexican Cocina, 4450 N. Broadway. … Pie season approaches: I’m judging an organic pie contest on Oct. 22 at Alfalfa’s Market (Boulder location) and teaching a workshops called “Zen and the Art of Pie” Oct. 23 at the Boulder Book Store. If you need a hands’-on class, check out Pies, Pies, Pies taught by Judith Sullivan Nov. 13-20 at Southern Hills Middle School. Registration: BVSD.org/lll. … The Farmette in Lyons hosts classes including quick pickling (Oct. 6), and bitters and cocktails (Oct. 13). lyonsfarmette.com/workshops

I roasted a small butternut squash: halve it, salt it, 400 degree oven for about 90 minutes until tender. I topped chunks of squash with some thick, garlic-y marinara sauce I made plus olive oil, basil and slices of fresh mozzarella and heated until bubbly. It made a darn fine dinner.

I’ve read a jeraboam of features on the rules of wine tasting, but the best I’ve seen were offered by Tim Atkin of  The Observer, including:

• Never wear a white shirt or blouse to a red-wine tasting.
• Never trust a person who collects wine labels.
• Plastic corks are almost impossible to put back in the bottle
• Red wines are more interesting than whites; rosés are less interesting than both.
• People worry far too much about food and wine matching.
• Drink too much wine and eventually you’ll fall over.