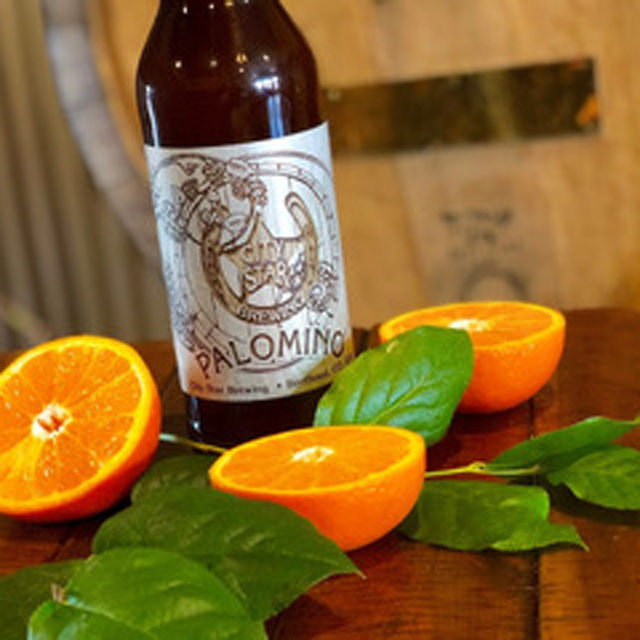 It’s springtime along the Front Range, and that can only mean one thing: 70 degrees and sunny one day, 30 and snowy the next. And the wind, oh the wind. Even the trees are hesitant to bud; they know just as well as we do there’s at least a couple more snow showers waiting in the wings, one more frost destined to wipe out all those blossoming flowers, maybe even a hail storm or two bracketed by uncomfortably warm days.

Trying to find the appropriate beer for such wild weather can be frustrating; too warm for imperial stouts and barleywines, too chilly for Mexican lagers and gose. India pale ales sort of bridge the gap, but don’t they always? It’s a new month, after all; why not look for something new, something a little on the fruity side?

There’s no better place to start than City Star Brewing with its latest: Palomino, a Belgian saison aged for 11 months in Chardonnay oak barrels and finished with soursop and tangerine.

As the name suggests, Palomino pours out of the bottle cloudy gold with a full pillow of white head (Palomino horses have gold coats and white manes; think Roy Rogers’ Trigger). This Palomino’s mane dissipates quickly, signaling that sour and fruit will dominate the drinking experience. The nose confirms: juicy citrus from the tangerine mingles with tangy, slightly acidic, notes from the soursop.

The fruit remains the highlight to the last sip, each one complemented nicely by subdued carbonation — more fizzy than bubbly — and a delightfully creamy mouthfeel, most likely from time in the barrel.

Unlike most barrel-aged beers, Palomino doesn’t punch you in the throat with heavy booze and smoky oak. Here, the wood rounds off sharp corners, smooths out the saison and highlights the fruit. It’s a beautiful brew, one worth seeking out.

The same goes for Gravity Brewing’s lovely Belgian-style dubbel: Coal Kriek. The label describes this 2016 World Beer Cup Silver Medal beauty as “cherry pie in the glass,” and a more apt description there is not. Rich and full-bodied, yeasty (like a pie crust) and with delicious tart cherries that pack a punch, the Coal Kriek (Flemish for cherry) is an ideal bridge beer for those who drink heavier stuff in the colder months, and bright and fresh offerings during the summer.

The brew is dry-hopped with Mosiac, making tropical the name of the game. Just cracking the can fills the nose with stone fruit, fresh mangos and warm beaches. And like most golden ales, the bitterness is far from over-bearing, while the body is full without being weighty. It’s a pretty beer to boot, one that pops and sparkles in the sunlight; which we should have plenty of, one of these days.