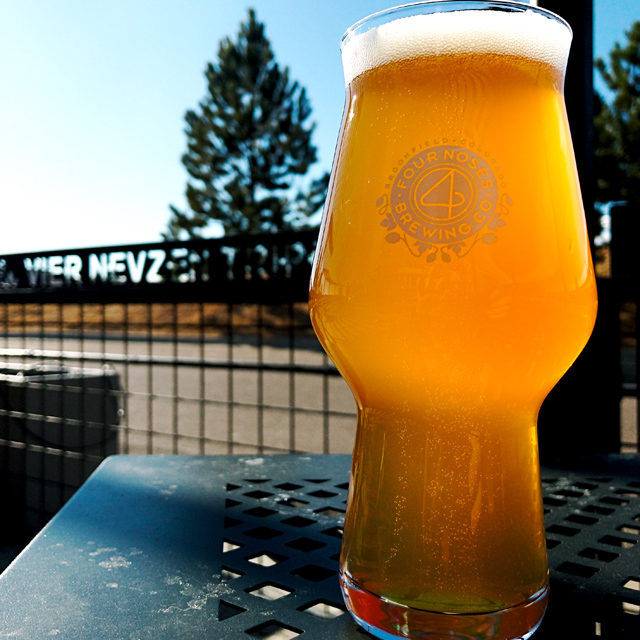 Goodbye 2017. Long live 2018 and all the brew it’s bound to bring. Especially the ones from 4 Noses Brewing Company — so named after the Bibliowiczs, the beer-loving family members who run the joint — and their Ad Hoc Series. Here, taproom release day is a can’t-miss event.

“We like to be experimental, we like to create new things and we don’t want to be restricted by core or year-round brands,” 4 Noses brewmaster Tommy Bibliowicz tells Boulder Weekly. “The idea here is to be as creative as we can, so we don’t plan it out months ahead.”

Dry hopping — steeping hops in the beer between fermentation and packaging — adds fresh hop aroma and flavor, which the DDH ‘Bout Damn Time has in spades. Dry-hopped primarily with Mosiac and a bit of Amarillo hops, the nose is floral citrus with a touch of dankness that shows as the beer warms. The mouth is full of hops, coating the tongue and sticking to the ribs with satisfaction.

That’s evident, but 4 Noses isn’t a hop bomb factory. Take its other Ad Hoc IPA release, this one in the New England style: Whimsy.

“One thing I started to learn, and really appreciate, about the New England style is that they use hops in a very different way than the traditional West Coast beers,” Bibliowicz says.

Utilizing NE IPA hallmarks, Whimsy has a yellow milkshake haze with a soft and frothy head. The nose offers juice and citrus and the flavor is full of Amarillo, Citra and Jarrylo hops with a creaminess that coats the mouth.

“There’s no fruit in it, but we tried to combine hops in such a way that would really give [Whimsy] that orange character,” Bibliowicz explains. “I think it gives people a different perspective into how capable hops are and what they really can do.”

And as the American-style Barley Wine shows, IPAs aren’t the only beers that get the 4 Noses hop treatment.

“We wanted something that embodied a little bit of a hop character,” Bibliowicz explains. “Something that’s not often used in barley wine: Amarillo.”

Caramel color, clean nose, hint of sweetness, fresh in the mouth with pine and resin — the Barley Wine checks all the boxes. And the experience is even better: malty alcohol coats the mouth while hoppy bitterness scrapes it clean, making each subsequent sip brand new.

4 Noses’ Barley Wine can be picked up in 500-ml bottles, while Whimsy and Double Dry Hopped ‘Bout Damn Time are sold in six-pack cans.