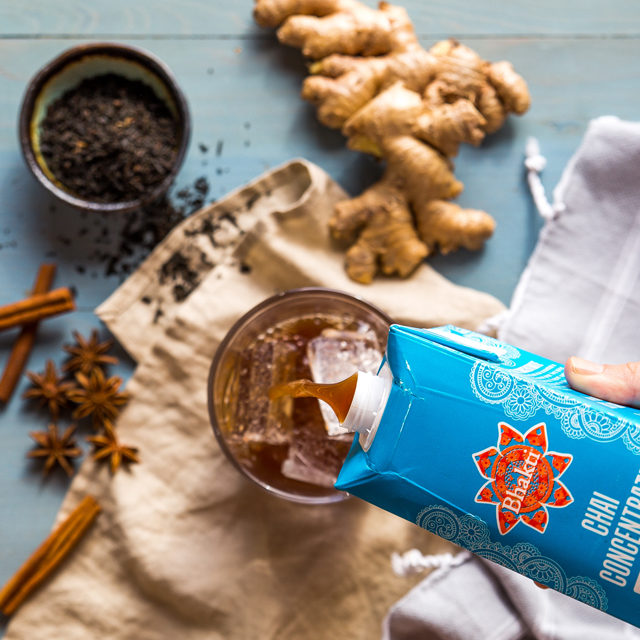 When I first visited Boulder more than a decade ago, a friend of a friend invited me into her home and let me stay the weekend. I read Herman Hesse’s Siddhartha on her sunny daybed, sipping this spicy, milky, hot beverage called chai that she made on her stove. One morning, I watched my friend of a friend slowly swirl crushed clove and cardamom pods into black tea, add fresh ginger then milk, and let the mixture froth delicately in its pot. I was hoping I could take the recipe with me on my travels, but, alas, no matter how faithfully I followed the preparation, nothing I created thereafter came close to the experience of sipping homemade chai in the home of a friendly stranger, while I listened to my head-voice tell Hesse’s tale about a curious seeker age into a humble servant.

Where I failed, Brook Eddy succeeded.

Eddy, too, fell in love with chai in the homes of friendly strangers, while also hearing stories about how service can be an act of devotion — to god, to community, to your self.

Eddy was traveling around India — from metropolises like Mumbai to small villages like Kali — studying a movement of people volunteering as acts of faith. What she found along the way was a history of humble hospitality passed down in cups of tea.

It was there, over hundreds of cups of tea and just as many conversations about service, that Eddy came to realize the Bhakti movement — “the idea that no matter your station in life, you have a responsibility to contribute to your community and create lasting impact in ways large and small.”

So, armed with both a message and recipes, Eddy returned to Boulder eager to share with her own local community. She tinkered with ingredients and proportions, ultimately settling on a fiery blend of chai with ginger she hand-pressed herself. It was a robust type of blend that hadn’t before graced many American tea shelves. The hope was that by selling the concentrate in farmers’ markets and cafes, she could begin to grow a product that would let her tell the stories of servitude she had heard in India, while giving people a chance to take a moment for themselves every day. That started with the name.

“I decided to name it Bhakti to make sure it was a mission-driven company. It’s not chai, it’s Bhakti Chai,” Eddy says. “It’s spicy, it’s good for you… a shot of fresh ginger. We kind of stood apart.”

As you might have guessed, Bhakti took off. In 2011 came individual servings in glass bottles made with non-dairy milk, which Eddy says she chose because she didn’t want any barriers to people trying the chai.

As the company grew, Eddy had to pull back from the production side — time constraints mandated it. No longer was she pressing ginger and brewing every batch like she had in the beginning; instead, she focused on marketing opportunities and growing the company. But it also allowed her the chance to finally put Bhakti, the movement, on a pedestal. In that sense, Bhakti Chai has transitioned from a tea company into a lifestyle brand.

“We’ve done that by with aligning our beliefs,” Eddy says. “(Our customers are) like-minded people, who want to go to India and appreciate we give back to women and girls and talk about things that brands are too shy or fearful to talk about. We came out with Barackti Chai for Obama’s inauguration, and it uses Kenyan coffee. I thought it was super funny.”

With growth comes exposure, and with exposure comes critics, particularly for a brand as bold as Bhakti. One recent article from a decently sized online publication accused Eddy of cultural appropriation — capitalizing on Indian culture as a white woman.

“I definitely took offense to that,” Eddy says. “It’s not cultural appropriation when you’re inspired by a culture. We buy our spices from India. We have relationships with people in India. We use only organic and only fair trade. It wasn’t a recipe taken from someone.”

It was particularly frustrating for Eddy because it seemed to undercut her original goal of sharing the Bhakti movement with a Western audience. The success of Bhakti Chai has allowed Eddy to launch GITA (Sanskrit for “share your story”), which helps promote, fund and operate more than a dozen service missions around the globe, while highlighting the individual stories of people of lesser means — many of whom produce the products we consume in the U.S. The projects include giving access to secondary school to young women in Peru; providing clean water to families in Central America and the Caribbean; a camp for orphans and vulnerable children in Rwanda; providing a platform for women in Nigeria and the Philippines to sell hand-made bags; and many more.

That’s the ethos of Bhakti, and what Eddy has hoped to accomplish in growing her company — giving back to the communities that give to others.

Sourcing ingredients from these global communities does present some challenges for Bhakti Chai. Subtle changes in spices and tea can occur due to weather changes or handling at facilities on the other side of the globe. There are variances even during the final production stages. That requires Eddy and the Bhakti team to make sure every batch is up to standards.

“It really is an art, and it is craft-brewed, so sometimes not every batch is exactly the same,” Eddy says. “There are fluctuations with ingredients, or maybe the tea was steeped two minutes longer because someone was on their break. … We’ve thrown out a lot of batches.”

For those who get hooked on the unique taste of Bhakti Chai, there’s good news — Eddy says the company will continue to tinker with new creations, like a Bhakti ice cream and the recent launch of cashew milk blends.

No matter how you drink Bhakti, though, the hope is that the stories Eddy wanted to tell from the get-go linger on the tip of your tongue. Chai as storytelling. Chai as a force for good. Whether you’re in a stranger’s small kitchen in India, or in a friend of a friend’s in Boulder, Eddy hopes chai can make you stop and think about the stories outside the cup.