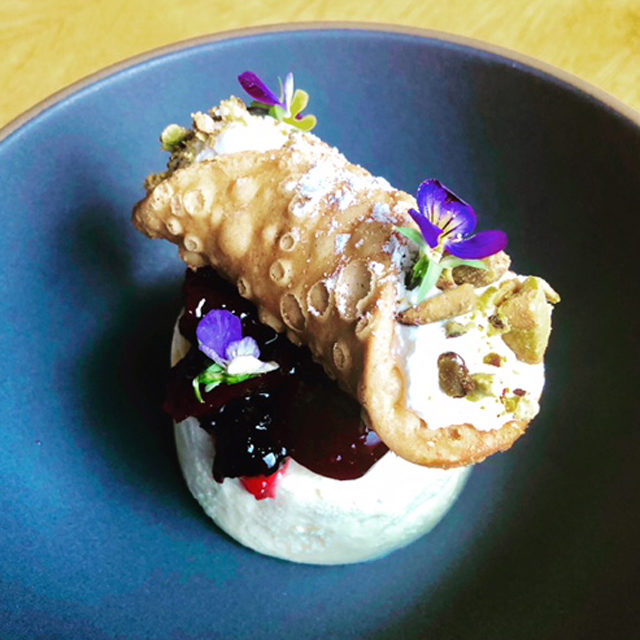 Only in New York could this happen:

Steve Redzikowski’s older brother goes off to join the Marines. He tells Steve, “You need a job, you’re taking my job.”

So Redzikowski works at the pizza joint in the New York City suburb in which he grew up. He’s 15. A couple years go by, he says to himself, “I really like this cooking thing. Let me try this in an actual sit-down restaurant. I tried it, and I just loved it.”

So he works at a mom-and-pop shop, but after a while, he yearns for more. He remembers his parents telling him, “If you want to do something right, surround yourself with great people and then you yourself will be great. If you do anything, pick the best people and try to pick their brain.”

Enter New York City. (That’s what Redzikowski does). He takes his parents’ advice to heart too, because he sets his sights on Le Cirque, the now-defunct, but once-renowned restaurant that helped launched the careers of Daniel Boulud, Geoffrey Zakarian and more.

Redzikowski drives into the city on a Saturday. He walks to the kitchen door and tells the sous-chef, a massive, German guy, “I’ll do anything, whatever you need.” Nothing. So he comes back the next week, then the next, then the next. And on that fourth week, the sous-chef says, “‘OK, you’ll start on vegetable prep.”

“I remember my brother saying if they give you vegetable prep — carrots, potatoes, onions — you peel them faster than anybody in the kitchen and you’ll move up,” Redzikowski says. “So I remember they gave me cases of potatoes, carrots, and I would just peel them like my life depended on it. And they noticed it. People notice hard work, and they start talking about it.

“(The chef) said, ‘Why don’t you come back next week?’ and I said, ‘OK, thank you, appreciate it,’ and he said, ‘You’re not getting paid though,’ and I said, ‘That’s OK.’ So I came back for three months, doing prep on the weekends, and finally he said, ‘If I pay you, will you move here and take a job here?’ He said, ‘Once you get in here, you’re basically mine,’ is what he said. And he meant it. I said, ‘Absolutely. I’ll take a job next week. I’ll pack my bags right now.’”

By the time Redzikowski is 19, he’s working as the kitchen’s saucier. Quiet and hard-working, getting the benefit of learning under the kitchen management, the other cooks take notice of Redzikowski’s astronomical rise.

“And I remember everyone in the kitchen hated my guts, and it was because I shut my mouth and ran my butt off,” Redzikowski says.

So this is where it really gets New Yorky. Almost three years into his time at Le Cirque, the sous-chef pulls Redzikowski aside and tells him, “You’re never going to be manager here. You only know what you know from what I’ve shown you here. You need to do something else.”

“I was like, ‘Oh God, did I do something wrong?’” Redzikowski says.

No, the sous-chef says, “I just want you to push yourself.”

So he literally walks Redzikowski down to the two-Michelin-starred Jean-Georges, and tells Chef Jean-Georges Vongerichten, “You need to hire this kid, he’s a hard worker. He’ll do whatever you ask.”

The rest, as they say, is history. The experience indeed proved to be fruitful for the young chef, and helped Redzikowski begin to envision what would become OAK at fourteenth in Boulder. At Jean-Georges, there was a focus on aesthetic, so much so that cuts had to be measured and uniform, or else they were tossed, resulting in hours of labor.

“They would hand you recipe sheets. Literally if it said, ‘Cut this to a medium dice,’ there was a picture of an item with a medium dice on it. And you would sit there for hours just cutting celery root into perfect dice and just throwing away tons and tons of scrap and trim. … Now, I’m like let’s use the whole product. I hate to say this, but I don’t care if it’s perfectly square. I just want it to be cooked right and taste good.”

That idea likely formed at Le Cirque, where baskets of fresh produce lined the 25 steps up to the restaurant, so guests could smell and visualize what was in-season and what would be on their plates. Redzikowski remembers Le Cirque’s famed restaurateur Sirio Maccioni handing bags of produce to guests as they left the restaurant. It instilled a commitment to showcasing in-season goods that we now take for granted, but was a revelation for Redzikowski.

“Truffle season would come, and that was the first time I’d seen white truffles. I said, ‘Why don’t we always have these on the menu?’ And everyone looked at me like, ‘Listen numb-nuts, they’re not available all year.’ And then I was like, ‘I get it.’” 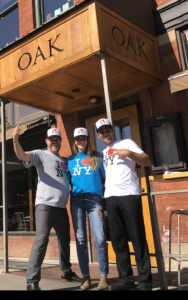 Being exposed to New York’s culinary world, often through second-hand stories from other cooks who tried restaurants around town, clarified Redzikowski’s vision for how to elevate in-season produce into a fine dining.

“One thing I learned in New York that stuck with me — it’s corny, but it stuck — I remember being there and all the cooks above me, they went to eat at someplace, and they said they saw so much kung fu in something. And I was like, ‘What the hell does that mean?’ And basically I learned it’s the chef taking an ingredient and then doing their twist on it and doing something a little outside the box. I don’t think OAK by any means reinvents the wheel, but when we think of a new dish, we say, ‘Let’s try to make this with a little twist on what we do so someone thinks I can’t just make this at home.’”

Now well-established as one of the few place in Boulder County where one can get truly fine, creative, fresh culinary experiences in a more relaxed setting (and with a lower bill), Redzikowski is bringing New York to us. After hearing several of his cooks say they hadn’t been to New York, Redzikowski had the idea to bring in pastrami from Katz’s Deli, steaks and burgers from butchers Pat Lafrieda’s, Hudson Valley foie gras (which Redzikowski says is the best in the world), and other classic New York items. OAK will add some fresh Colorado meat and produce, put their own house techniques to them, and serve them from July 24-26.

Only in New York? Maybe not.