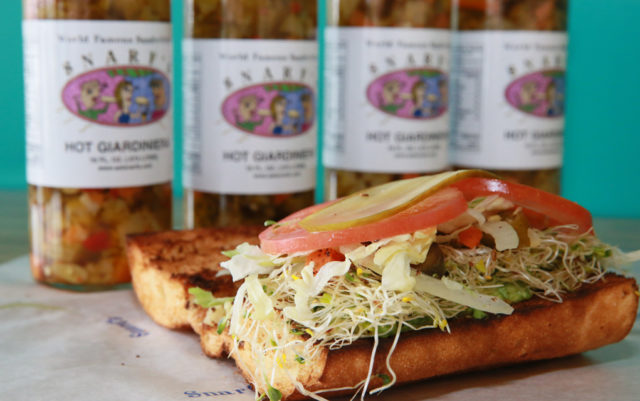 I’m not a vegan nor a vegetarian. I do enjoy yummy animal proteins, but I often end up going meatless when I’m out. These veggie choices are as much about taste as they are about how much they enhance my general state of wellness. Simply put, I heart falafel.

When I arrived in Boulder in 1976, the meatless options were basically French fries, baked potatoes, hash browns and salad bars (except for the brown rice and beans at the hippie-run Carnival Café). Now, the city boasts an enviable roster of sit-down restaurants featuring meatless cuisine, and most local American and ethnic eateries have vegan or vegetarian dishes on the menu.

However, day-to-day “eating out” often means grabbing something quick at a fast food or fast-casual spot for a lot of us. This is more challenging for vegans, but, at least to start, a recent businessinsider.com article lists 13 dishes at national chains that are “vegan without your having to change anything besides requesting no cheese.”

At KFC, the vegan fare runs the gamut from corn on the cob (no butter) and green beans to baked beans, potato wedges and house salads (with non-creamy dressing).

In Finland, you can now order a McVegan “burger,” but U.S. McDonald’s patrons choose from black coffee, apple slices, a side salad, and fruit and maple oatmeal (no cream).

The list starts with a false assumption that the lack of animal ingredients is the sole factor vegans consider when choosing a place to eat. What about the chain’s record on sustainability, transparency and humane treatment of farm workers and animals? Do they have drive-thru windows that encourage pollution? Besides, do vegans really want to eat at a chain eatery surrounded by people chomping cheeseburgers?

Colorado’s many homegrown fast-casual chains do a much better job on many levels than these national chains at serving the needs of vegan and vegetarian diners.

At Snarf’s Sandwiches, all of the vegetarian sandwiches (except for my favorite, eggplant Parmesan) can be served vegan by holding the cheese on the avocado-layered vegetarian or portabello toasted subs. I’m also a fan of the Greek-accented artichoke and feta sub piled with all the veggies.

Eating vegan is even easier at Garbanzo Mediterranean Grill, where plates, wraps, salads and gyros can be made with falafel or marinated portabello mushrooms plus hummus, baba ghanoush, tabbouleh, salad and tahini. I love the warm, fresh pita and the extra-crunchy falafel.

Noodles and Company, another longtime local standard-bearer, has always had a wide selection of plant-based dishes. The vegan roster includes Japanese pan noodle and, minus the cheese, penne rosa, whole grain Tuscan fresca and spaghetti with marinara.

Red Robin isn’t fast or fast-casual but the chain is notable because you can order a reputable gourmet veggie burger with the classic toppings — hold the sauce and cheese — plus regular or sweet potato fries or, best of all, “bottomless” (and butter-less) steamed broccoli.

A final reality check: Vegetarian and vegan fare is much more available now, but according to Datassential, 90 percent of American restaurant menus still include chicken, beef and/or pork dishes.

(Did I miss your favorite Boulder County vegan fast food or fast casual dish? Let me know at: nibbles@boulderweekly.com.)

The second location for Boulder’s Verde Restaurant is open at 640 Main St. in Louisville, previously home for 90-plus years of the Blue Parrot Restaurant. … Tadka Indian Cuisine is open at 5290 Arapahoe Ave., with new management taking over at the former site of Royal Clay Oven and the Royal Peacock. … La Choza Mexican restaurant has opened a second brick-and-mortar location at 1203 13th St. on the Hill. … It was a running joke when Colorado first legalized cannabis but now market economics have convinced the Girl Scouts of America to legalize the selling of Thin Mints, Tagalongs, Samoas and other cookies outside of Colorado cannabis shops. Let’s call it a teachable moment for the young ladies and their parents. … Did you know that the TSA’s list of what you can bring on flights in the U.S. includes a section devoted to pies and cakes? Both are approved for carry-on and checked bags. Also OK with the TSA are pizza, sandwiches, cooked meat and fresh eggs. Whether your seatmates will be thrilled is a separate question. Gravy is allowed in checked bags, but you can only carry on less than 3.4 ounces of it.

A last-minute getogether with friends at Denver’s Los Carboncitas restaurant started with thin, crisp chips and a flight of variously smoky, intensely hot and tart salsas. I went with my go-to entrée: soft corn enchiladas stuffed with lots of shredded chicken and robed in a dark, but not sweet, mole sauce. Old and familiar is sometimes the best.

“Those family occasions and gatherings around a big table with everyone talking at the same time, that’s where I felt my first sense of happiness.” — Francis Ford Coppola.