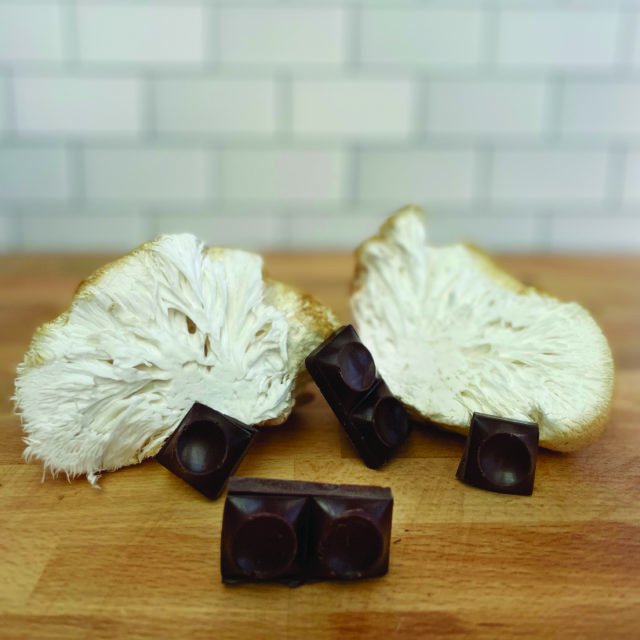 Functional fungi are on everyone’s lips these days, and cacao tops our list of favorite superfoods. That said, they’re like entrees and desserts. We usually don’t eat them simultaneously.

Michael Caines, co-owner of Boulder’s Moksha Chocolate, thinks mushrooms and cacao were made to go together.

At Moksha’s factory/store/tasting room behind a garage door at 2746 47th St., I watch as Caines slowly adds a mixture of ground organic lion’s mane, chaga, reishi, cordyceps and maitake mushrooms to heirloom 70% cacao being slowly ground in a stainless steel vessel.

These mushrooms have traditionally been consumed to support immunity, stamina, and mental clarity, and scientific studies have supported their use therapeutically, Caines says.

“Chocolate is the perfect medium for delivering functional mushrooms because the cacao butter encapsulates the particles and improves your ability to absorb them,” he says.

Besides bean-to-bar cacao, the finished Moksha Amazonia bars include house-pressed cacao butter and coconut sugar and a full gram of mushroom powder per ounce of chocolate.

“I’m able to use many locally grown mushrooms in the Amazonia bars from growers like Boulder Mushroom,” Caines says.

If the thought of combining mushrooms and chocolate sounds bizarre, the Amazonia chocolate is a semi-sweet treat. The dark squares of vegan craft chocolate melt creamy on the palate with notes of caramel, fig and coconut with a hint of savory umami.

“I wanted to combine chocolate with an effective dose of therapeutic ingredients in each serving that didn’t taste bad. It took a lot of experiments with the recipe,” Caines says, noting that he got practice crafting Moksha’s CBD-infused bars.

Honey dissolves but adds unnecessary flavors. Agave syrup is neutral but alters the mouthfeel. Pure cane or beet sugar are perfect but hard to dissolve in iced tea. The answer is simple syrup. The so-called “vodka of sweeteners” is beloved by bartenders because it sweetens without flavoring.

To make simple syrup, simply add a cup of water and a cup of sugar in a saucepan and heat just until the sugar dissolves.

Bar nerds suggest weighing equal amounts of water and sugar to achieve the ideal sweetness, defined as 50 degrees Brix, the scale of measurement for solids dissolved in a liquid. It’s easier to use a measuring cup.

Taste of the Week: Dipping in Tartare

Lafayette’s Reelfish Fish & Chips is quietly doing a great job of filling the local fried seafood void. The eatery is a welcoming space with an aquatic theme and ice-cold beer, and much less humid than Cape Cod.

Ah, the clams! Reelfish uses plump clam strips, not bellies, battered and fried to order. The airy batter is lighter than the traditional thick chewy coat many clams wear into the fryer. Hot from the oil, these clams are slightly sweet in their crunchy jackets.

Dunked in cold white tartare sauce with a spritz from a lemon wedge and a little Tabasco sauce, they satisfied that summer craving.