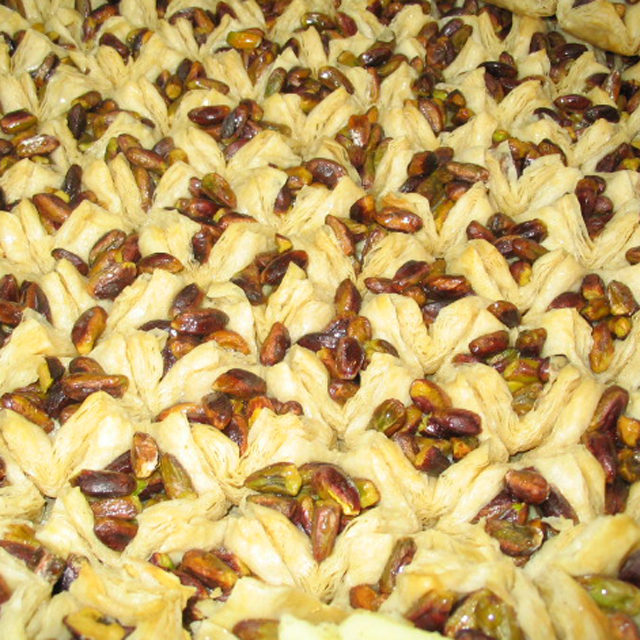 And when it comes to her homeland of Syria, culture is much more than hummus.

“I wanted to add some Syrian dishes to the menu from my grandmother and my mom,” she says. These recipes were not written down, but ones that only exist in her memory.

She points out grape leaves filled with rice and lamb that are served warm, cabbage rolls stuffed with rice and ground beef, and simmering molokhia (or mallow greens). Magdoos — baby eggplant stuffed with walnuts, red pepper and garlic — have become a popular appetizer. “This is a very famous dish. Every Syrian family makes it,” Samar says.

For most diners, these specialties will expand their concept of what Middle Eastern fare can be. For Samar, the food provides tastes, aromas and sights from her Damascus home, a place that no longer exists.

“The war began and then it got worse and very dangerous. We had to move and left everything behind. Our home has been totally destroyed by bombing. What we had built together is gone,” Samar says. The family had lived in Syria for more than 200 years.

“We moved to Libya where it was safer. After two years, there was no security, so we moved to Turkey,” she says.

Samar’s brother, Fiyahd Aoutabachi, has been in the restaurant business locally for decades and owns Ali Baba Grill restaurants in Golden and Denver. He urged the family to move to Colorado. Samar and her husband and two sons (now 21 and 23 and attending college) settled here four years ago. They also have two older daughters, one an IT expert in Berlin, the other an architect in Canada. Family reunions are impossible because of their immigration status.

Ali Baba Grill opened in Boulder three years ago. “I had never run anything. My food at home was very good but I had never cooked in a restaurant. My brother said, ‘You can’t look behind,’ so I decided to try it,” she says.

Foods and peoples have had a tendency to ignore national borders in the Middle East, where variations on the same dishes pop up in Lebanon, Syria, Iran, Turkey, Greece and beyond. Ali Baba Grill has the classic lamb kabobs, gyro and baklava, but also takes a much deeper dive into the cuisine of the region with delicacies like tender bone-in lamb shank baked in a tomato sauce and deep-fried whole red snapper.

This fare is naturally vegetarian-friendly, but Samar added Boulder-specific vegan dishes including lemony garbanzo and red bean salad and a wonderful, slightly sweet roasted red beet baba ghanoush. This is the Mediterranean diet at its finest.

One corner of the restaurant is a sort of shrine. “I try to preserve my family’s culture and history. I wanted people to know about our traditions, not just the food,” Samar says. Black-and-white photos depict Damascus as it used to be. A “heritage table” holds reminders, toys and artifacts of Syria including a guitar-like oud, drums and a fountain. There is a Syrian cape and cap guests can wear to shoot selfies.

Samar says that she and her husband are still adjusting to life in Boulder.

“It was such a shock. Everything is so different here. I studied English literature but the language is not the same. Everyone has been nice but when you are forced to leave your country you get … homesick,” she says.

The family applied for asylum several years ago. “We applied and they said: ‘Now you wait.’ We are still waiting … until when, we don’t know. I am happy my family is safe and my children can get an education,” Samar says.

Ali Baba dishes hummus smoothed with sesame tahini, and Samar is amused that hummus has become so ubiquitous on American tables. Hummus, like pizza, is almost no longer thought of as an “ethnic” food. “Some people think hummus is the only Syrian food. For us, we mainly eat hummus for breakfast,” Samar says.

My favorites on the Ali Baba Grill menu include flame-grilled chicken shawarma seasoned with pomegranate molasses and muhamara, a spicy dip of walnuts, cracked wheat, onion and lemon juice made for pita-bread dipping. Honestly, I could eat the crispy sesame-seeded falafel every time I visit. When the world is a bit much, I highly recommend forgetting it over cups of hot mint tea and traditional walnut and date cookies.

Noodle House Kitchen has opened in the former Lee Yuan’s space in the Meadows Shopping Center, serving hot pot and noodle dishes. … The Wednesday evening Boulder Farmers Market, complete with live music, beer, pupusas and fresh beets, is open for the season. … The answer to the perpetual conundrum — “Where do you want to eat tonight?” — is in the fresh Best of Boulder County 2019. Voters named Flower Child as Best New Restaurant, followed by Corrida and Chimera. There was impressive competition in the Best Distillery category. Spirit Hound Distillers won over Vapor Distillery, Longtucky Spirits and 12 Point Distillery. More at: boulderweekly.com. … The Colorado Kid from Odd13 Brewing has elevated the “local” bar. The new hazy IPA is brewed from local water, Colorado barley malt from Fort Collins, yeast from Denver and hops from Montrose, and it’s only served at the brewery’s Lafayette tasting room. … Denver’s debut Vegan Restaurant Week, May 13-19, showcases vegan fare at 30-plus Denver restaurants and food trucks including Charcoal Bistro, Concourse, Duo, and Fire on the Mountain. vegfestcolorado.org

“Everybody needs beauty as well as bread, places to play in and pray in, where nature may heal and give strength to body and soul.” — John Muir