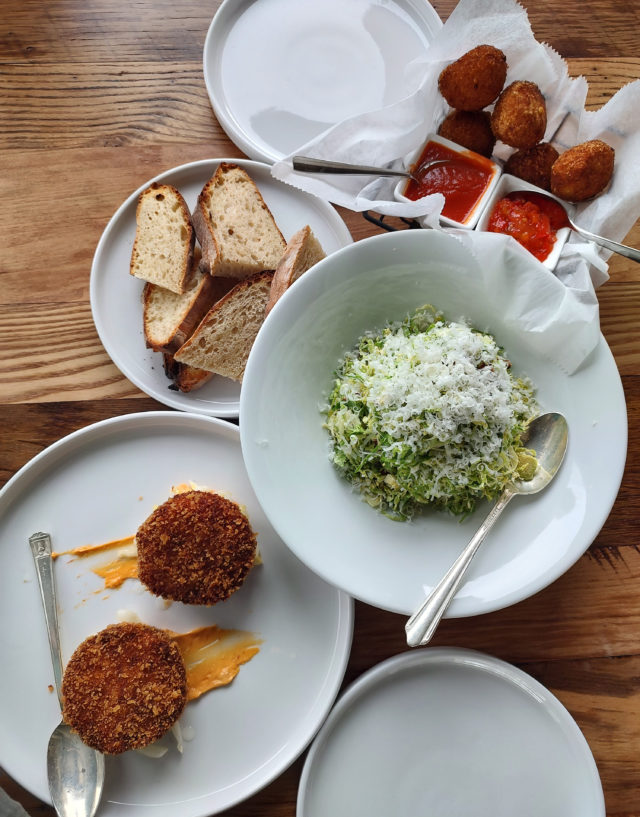 I probably should have waited a minute before I bit into an arancini, but I couldn’t wait. Hot from the fryer, the little breaded bundle blasted molten saffron risotto, fresh mozzarella, corn and pecorino Romano onto my palate. Dipped in warm marinara it was even better.

That was my introduction to the fare at Boulder’s Fringe, A Well Tapped Eatery.

Next up was a crab-packed cake in a super-crunchy panko coating making craveable bites with pickled citrus cabbage and harissa-spiced aioli.

“I can’t stop eating this” my friend commented on a simple Brussels salad that was a revelation because it tasted so un-sprouty. A soft mound of shaved Brussels sprouts with shredded pecorino and spiced candied pecans was barely coated in a perfect dressing of hard-boiled egg and lemon vinaigrette.

Meow Wolf’s Convergence Station has many mind-bending attractions, including some fine hand pies. Hellofood, the cafe inside Denver’s new immersive entertainment facility, offers Bubby Goobers pies crafted by two women in a small local bakery. The round, gemlike pies are built on a crunchy, flaky, sugar-dusted crust. Leftover crust pieces are perfect for dunking in coffee.

The bakery’s dozen varieties include Black & Bluebarb pie filled with a combination of fresh blackberries and blueberries, plus blueberry rhubarb jam. The Cherry Amaretto gets serious about flavor with a mix of cherries and Brad B Jammin sour cherry jam topped with sliced almonds.

My favorites include the Salted Caramel Apple, a three-apple blend with homemade caramel sauce, and the wonderful Hazelnut Chocolate Ganache pie. Imagine a dark chocolate Nutella-like filling topped with chocolate drizzle and a sprinkle of Maldon sea salt flakes.

The air-fryer is the best thing to happen to bok choy and green onions since teriyaki sauce. This fact was revealed to me after I bought some bok choy. We’re not talking about the cute, easy, baby bok choy, but a fully grown head with big celery-like stalks. I could and did stir fry some with chicken and sesame oil but there was still a lot so I opted for my recently gifted air fryer/convection toaster. I trimmed the cabbage-y green leaves and tops for later use, as they would char black before the rest cooks. I cut the stalks into pieces, added some peeled wilted carrots and green onions, and tossed the veggies with oil, salt and pepper and air-fry-ed until lightly browned, soft and sweet. Since the air fryer was sizzling hot, I did the only logical thing: I dry toasted long grain dry basmati rice until it was golden brown. Watch closely as it easily burns!