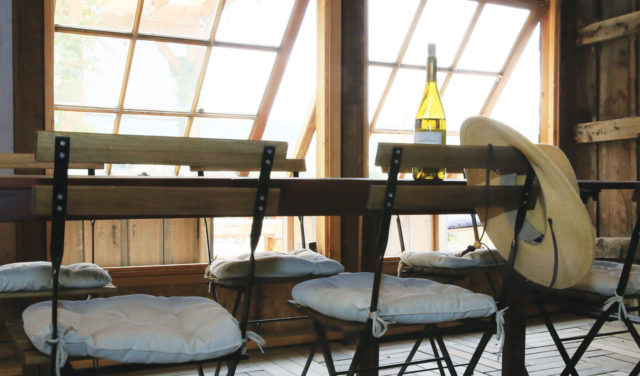 Once or twice a week, Eric and Jill Skokan welcome two dozen diners to their latest farmland acquisition — 40 acres just north of Nelson Road, with wheat and crop fields and an almost 150-year-old blackmith’s shop, now turned into a rustic dining space.

It’s not polished yet. The kitchen needs to be built out, irrigation lines need to be buried. But early patrons of Black Cat’s farm dining space in Longmont are privy to a remarkable transformation of the land and buildings that reside on the property. Just seven years ago the land was condemned by the County.

“We’ve been working really hard on the place,” Eric Skokan says from the patio, looking over a field of freshly harvested wheat and summer leafy greens. “When we bought it, seven years ago, after, you know, 40 years of neglect and disrepair, it didn’t have, at the time, an adjudicated well. It had a historic well but no legal paperwork for it. It didn’t have a septic field; it had a pit, literally a cesspit up on the hill over there and go figure, you know, County Health didn’t like that.

After “seven full seasons of This Old House” repair on the property, the fields are growing food, much of it served to guests in the restored blacksmith shop at the southern end of the property. Standing inside the space, you can see where the weather from the north beat down the wood paneling over the decades. Maybe you’re sitting on a knotted, dark wooden bench by the new entry doorway, the old workbench of the blacksmith. And you’ll see where, when Skokan’s team opened an area of the wall to provide access to the kitchen, they found newspaper from Oct. 9, 1883, likely used as 19th century insulation.

The Skokans looked for two years for a spot to host farm dinners before adding these 40 acres, bringing their total farm acreage to 400, much of it just a quarter-mile south off Oxford Road. They wanted a spot free of neighbors — there’s one way off in the distance — so as not to disturb anyone with the clamor of excited dinner guests or the occasional wedding party. They wanted a spot that had a view — and the view of rolling hills with the foothills behind it and a creek that snakes through the valley below is unparalleled. They wanted a property with farm infrastructure — there are coops and a millhouse for grain grown onsite, though this winter they’ll bury an irrigation system four feet below the fields, as they’ve done on the six other properties they own or lease from the County.

And, lastly, they wanted land that could be farmed.

As it turned out, the land has unique benefits to the Black Cat growing operation. An offshoot of Left Hand Creek winds through a low part of the property, making nighttime cooler down there by as much as 10 degrees and allowing Skokan to grow crops that can’t handle the summer heat on flat land.

“It’s crazy,” Skokan says. “As a consequence, we can grow lettuces or regular things that don’t like the heat even when it’s, you know, it’s been in the 90s every single day for pretty much a month.”

And the field below was once used to grow wheat. Today, Skokan grows enough grain on that same land to meet the needs of his restaurants and the farm dinner location. And there’s enough extra to send back to a heritage grain seed bank as well as to experiment with new varieties (including one he’s told is used for baguettes in France). Black Cat even sells bags of flour at the local farmers market.

It’s all processed in a millhouse at the southeastern edge of the property, complete with an antique (but fully functional) seed cleaner and industrial flour mill, with Skokan’s combine parked outside. In large bags in the millhouse are cleaned seeds for Swiss rye from 1457 and the 1,200-year-old parent of durum wheat, alongside bins of trial Persian grains.

You get a sense of all that history just standing on the property — even the dogs that patrol the area are a unique breed (Akbash) that’s snuffed coyotes and foraging animals out of farmland in the Caucasus for millenia. But you also appreciate the attention Skokan and Black Cat have put into every little detail from the farm to the dining space to the food on the plate. It’s a recipe that’s allowed Black Cat to expand this far.

Until the kitchen becomes fully operational, Black Cat chefs prepare meals for farm dinners in their Pearl Street kitchen, which is becoming more like a “submarine galley” with each new project added into the operation, Skokan says. Menus change based on what’s working in the fields, with substitutions coming until the last minute before dinner service to ensure freshness.

“One day, maybe I’ll be a good enough farmer and chef to be able to predict a day ahead, but right now I have to leave it,” Skokan says. “I don’t see every single thing every day, right? And so I’m relying on my memory of what the arugula was like four days ago. And then we harvest it and we’re like, ‘This won’t work.’ And so then instead of like regular arugula then it’s arugula pesto. That ends up being the change.”

It’s familiar footing, or lack thereof, for Black Cat chefs, who have built dinner menus daily based on last-minute information from the fields.

“Our chefs and sous chefs in the kitchen have been working inside this system for years,” Skokan says. “At this point, they’re more confident with flexibility than having everything written in stone. … Imagine if every day you did, you know, the Top Chef mystery basket challenge, and if that was your world, eventually it would be normal.”

It’s not likely the culmination of Skokan’s work, but it feels like a fitting aggregation of his talents and passions, this restoration of food, property and industry. But the chef turned farmer turned contractor is just happy there’s an audience here to share all the work with.

“You know, the food is from this field or the field that’s a quarter-mile away. Obviously it’s ridiculously fresh, and the view here is spectacular, and the space works really well and feels good. And then we have this old, historic barn that we get to work on,” Skokan says. “I feel pretty lucky.”