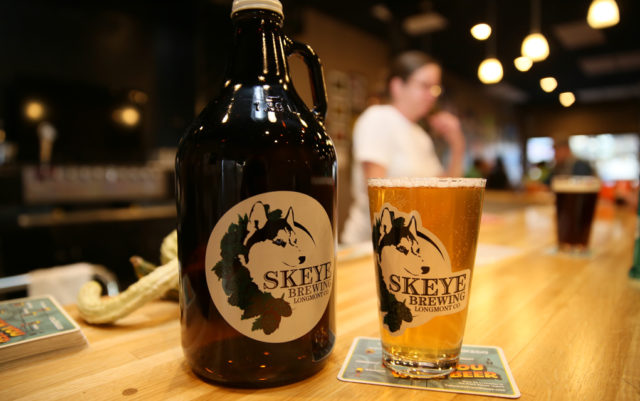 SKEYE Brewing became the eighth brewery in Longmont when it opened in the summer of 2015. Now, Longmont is home to ten breweries and each one has a hook, a way of standing out from the crowd. Looking for lagers? Go to Wibby. Digging nitro? Left Hand is the place to be. Need something to quaff after that long run? Give Shoes and Brews a try. Everybody needs a sell, something that gets people through the door and quickly conveys what they are about. For some breweries, that sell is on the door. For others, it’s buried a little deeper and worth the dig. SKEYE Brewing has both.

Take a look at SKEYE’s logo — a blue-eyed, black and white Huskie circled in a garland of hops — and you’d be correct in assuming this is the kind of place to bring your well-behaved pooch. The name of the brewery is derived from two of SKEYE’s owners’, Kami and Chris Malanowski, three dogs: Sierra, Kita and Yakone. While I downed a glass of Blood Orange IPA (6.5 percent alcohol by volume) — a tangy variation on SKEYE’s Jaded Lady IPA — a peaceful pooch napped on the cool floor, just the place one wants to be on a hot summer afternoon.

SKEYE’s Blood Orange IPA is a delightfully citrus brew, ideal for summertime drinking with the windows open. My follow-up, the Tobias Irish Red Ale (5.5 percent)  — named after a Boston terrier belonging to Steve Allen, the brewery’s third owner — has plenty of biscuity English yeast and smooth Patagonia caramel malts to give a balanced and even taste profile, but somehow left me wanting something more. Little did I suspect that the answer would be the addition of another tap.

Sure, SKEYE has dogs, but what really separates this brewery from the pack are the specialty beer combinations. My server knew exactly what I needed and gave me a Jaded Lady in Red, “a beer that is just fun to say,” a blend of the Tobias Irish Red and the Jaded Lady IPA. The smooth malt backbone of the Irish Red handles the hops of the IPA, harmonizing for just enough citrus and bitterness to keep things nice and bright.

Tobias’s malty backbone is also the cornerstone of SKEYE’s Jinxie Red, a blend of Tobias and the Jinxie Wheat (5.7 percent) — pleasing those who don’t have a feel for hops — and Prairie Red, a blend of Tobias and the Prairie School SMASH Ale (5.8 percent), a combo that acts an awful lot like a fragrant and full amber ale. The Prairie School also works nicely alongside the Jaded Lady IPA, for a Prairie Lady: a tasty and mellow hybrid with just enough hops to keep you thirsty.

Sure, come for the dogs. Hell, come for the beer. But stay for the combinations. Every brewery is alike in a variety of ways, but SKEYE has a way to tailor it to every customer.