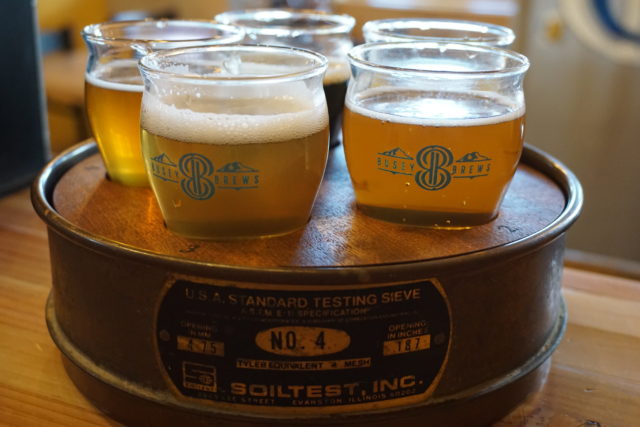 Nederland’s newest brewery isn’t even a year old, and it’s already a winner. At least that’s what Boulder Weekly Best Of voters think: The brewpub with a barbecue emphasis was the top write-in vote-getter for Best Nederland Restaurant — which is nothing to sneeze at considering it’s only been open for 10 months, two of them in a pandemic.

Frankly, it’s a surprise Busey Brews didn’t also get write-in acclaim for Best Wings or Best Mac ‘N’ Cheese. Well, the latter isn’t a category (yet), but they should have netted both. The wings are plump and juicy, smoked with a good bit of char, and then sluiced in your choice of sauce — the buffalo reigns supreme, but the Nashville hot is no slouch, and the mac ‘n’ cheese sports oversized elbow macaroni drenched in gooey, life-affirming cheese. Wash it all down with a slug of Tropical Staycation Juicy IPA (more here), and the summer of social distancing just got a lot more tolerable.

Enough of the food, we’re here to discuss beer and Busey’s brews shine bright like a diamond. They offer five (and a house-brewed kombucha) and are one of the few breweries around still doing flights, which is the way to go if this is your first rodeo.

Follow Busey’s suggestion and start with Mango Kölsch-al Distancing. Hailing from Cologne, Germany, Kölsches are similar to Bavarian lagers except that they are fermented with ale yeast, which produces delightful and fruity aromas. Busey kicks it up with mango, giving the beer a tropicality without overrunning the base malt, which is what you want when you reach for a Kölsch. It’s wonderfully bright, has enough alcohol (6.1% ABV) to stand up to heavier meats and cheeses, and plenty of sweet malt to coat and cool the tongue if you’ve got a heavy hand when it comes to the hot sauce bottle.

If Looks Could Pilz is a traditional take on a Pilsner: light and lean with peppery hops. Hambone IPA is a welcome approach to a West Coast India pale ale: Amber in color, dank on the nose with loads of citrus and fleshy fruit, and well balanced in the mouth. If I Had a Midnight Lager is dark in the glass, semi-sweet chocolate chips in the mouth, with a refreshing finish.

What’s more, all of Busey’s brews are fresh and vibrant, which is not something you’re guaranteed at every restaurant and brewery these days. Practically everyone in the food service business runs on thin margins, and many of them couldn’t afford to dump their beer, even if waiting out the shutdown pushed them past their prime.

Not the case here; all of Busey’s brews are small-batch — as of this writing, they’ve brewed 2,654 gallons, or a little over 63 barrels — and each beer is numbered accordingly (Tropical Staycation appears to be the most recent at BB-22). On deck, they have a barrel-aged stout, a Mexican lager, a Berliner weisse, a saison and a double IPA. With a lineup like that, they’re sure to make future noise in Boulder Weekly’s Best Of in the Beer category as well.

Located at 70 E. First St., the building housing Busey Brews has a storied history in the town of Nederland. The building itself was built in 2006; at the time, the first structure built in over a decade. Its first occupants, Cori and Tom Boogaard, opened the Wild Mountain Smokehouse & Brewery after Tom’s several stints in the brewing industry, including a stop at Avery Brewing Co. (he helped design The Reverend). Success carried over to their Nederland venture, especially when it came to his Hop Diggity IPA.

The Boogaards called it quits in September 2016, and two months later, Mark Ruiz and Matty McClyman revamped the place for James Peak Smokehouse & Brewery. In March 2019, they hired Kyle Busey as James Peak’s general manager, and when they decided to sell the place, Busey was right there to scoop the spot up. His brother, Nick, had been a homebrewer since 2018, and with the help of their family, the brothers opened Busey Brews on Oct. 19, 2019.