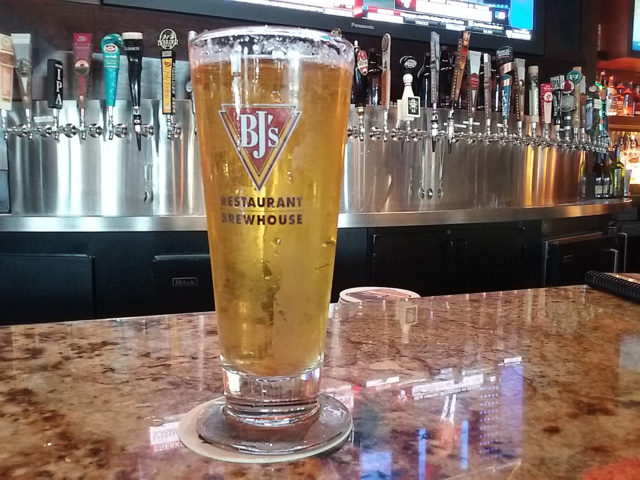 If you are a dedicated beer drinker in the Boulder scene, it is entirely possible you’ve never set foot in BJ’s Restaurant and Brewhouse. Sure, it’s hard to miss as you roll down 28th Street on your way to Trader Joe’s. Maybe you’ve even thought about how great pizza and beer would taste after a movie at the Century Theater. But with so many new breweries opening, the staples seem to get lost in the shuffle. Well, if you’ve never been, or haven’t been a while, do yourself a favor: stop in and order something off the R&D menu.

Started as a Chicago-style pizzeria in Santa Ana, California, in 1978, BJ’s quickly expanded throughout the California Southland and got into the brewing game in 1996. Boulder’s first BJ’s, located on Pearl Street, soon followed in 1997. In 2012, BJ’s left Pearl for its current facility, a 200-barrel brewhouse that produces the beer for all Colorado locations.

Currently, there are five BJ’s in Colorado — Westminster, Aurora, Colorado Springs, Fort Collins and Boulder — and all five serve BJ’s classic lineup. Ranging from Lightswitch Lager (3.5 percent alcohol by volume), light and drinkable — BJ’s version of Coors Light — to the Nutty Brewnette (5.5 percent), loaded with chocolate malt and notes of almond, walnut and Brazilian nut, to Tatonka Stout (8.5 percent), a hoppy stout served on nitro. BJ’s core beers, 10 in all, are easy, accessible and designed with the casual drinker in mind. For those looking for a walk on the wilder side, BJ’s has just the menu for you: Aaron’s R&D Brews.

Hailing from Wisconsin and educated in Scotland, BJ’s head brewer Aaron Stueck brings a wide variety of brews to the Boulder headquarters, one where even the most seasoned drinkers can expand their knowledge. Take the standard Berliner Weisse (2.8 to 3.8 percent): tart with an expected fizziness, this beer is a perfect summer sipper that can be found just about anywhere. But here you can order it with a hit of Waldmeister Getränkesirup, the syrup Germans commonly add to give it a sweet, melony brightness.

If sweet and bright aren’t your thing, then try Shati (7.5 percent) or, as Stueck calls it, “A wild and crazy rye.” Shati is a traditional Finnish beer full of spice and brewed with baking yeast, giving it a distinct sourdough flavor.

If you need to go darker, Stueck has a Coffee Belgian Stout (nine percent) that is surprisingly refreshing and far too easy to crush for a nine-percenter. With the distinct Belgian taste of banana and clove, this sweet stout brings enough coffee-roast to the table that a taster of it might be the perfect lunch dessert. Granted, BJ’s is famous for its Pizookie (a giant pizza-shaped cookie), but the Coffee Belgian Stout is substantially less filling.

In addition to BJ’s 10 core beers, Stueck has 10 R&D beers that come and go as fast as people drink them. A few favorites are sure to return, but what gems are next on the horizon has us thirsty already.