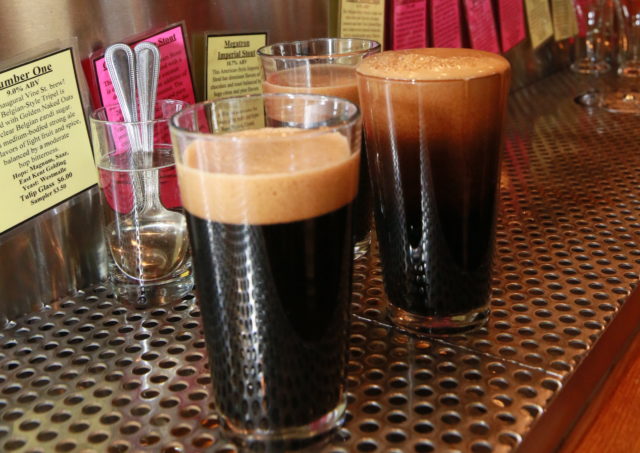 It’s a silver anniversary for Mountain Sun’s Stout Month — the brewpub’s annual celebration of roasty, toasty, malty goodness. For the next 28 days, all five Mountain Sun locations will celebrate the famous dark brew with no less than 60 different house and guest stouts to help you whittle away those dark and dreary February days. Whether you consider yourself a stout aficionado or have yet to master the dark arts, there is something for everyone.

“Up until now, the most we’ve ever been able to do is 29 house stouts,” says John Fiorilli, Mountain Sun’s director of brewing operations. This year, Fiorilli hopes to hit 33. “It’s the first Stout Month we’ve done with that many new beers.

“The first one is called Ned’s Two-Alarm Cherry Chili Stout,” Fiorilli says. “Discussion on it started two Stout Months ago when we released a Cherry Vanilla Bean Stout.”

Fiorilli says that particular brew was the first time Mountain Sun perfected the blend of dark sweet cherries with tart red ones. Then, Savory Spice brought Fiorilli some dried Morita Chilies — a pepper that favors smokiness over spiciness — and a pairing was born.

“It brings a little heat, but we were mainly blown away by the smokiness and the aromatics of that pepper,” he says.

The grain bill was tweaked to enhance the smokiness and complement the flavor profile Fiorilli was looking for. The end result is a beer with some smoke, some pepper, a pinkish-tinged head from the cherries and a touch of heat.

“Enough for you to know that those peppers are in there,” Fiorilli says, “but not enough that it should scare anyone away.”

Closer to the dessert side of things is Second Breakfast Chocolate Coffee Oat Stout, the first chocolate stout Fiorilli made without lactose.

“The base beer itself is just oat stout with malted oats, golden naked oats — which are caramelized oats — and flaked oats,” Fiorilli says. “And dark chocolate because it has no milk solids or milk fats in it.”

Rounding out this year’s additions is a stout that should interest any drinker with a love for history: Old World Stout, a modern execution of an 18th-century English style, which Fiorilli aged in oak barrels for two years with Brettanomyces classenii — a wild yeast strain isolated from English cask beer.

“That strain of wild yeast just gives it this crazy cherry-pie-type thing,” Fiorilli says. “It tastes like there are tart cherries in the beer, but there’s no fruit added to the beer at all.”

Add in flavors of biscuit, toasted hazelnuts and dark roasted coffee, and you have the makings of something special.

In addition to the beer, Mountain Sun is celebrating their 25th Stout Month with style. Check the calendar on their website for myriad events — from Bill Murray Day to haiku contests and live music — across all five pubs.