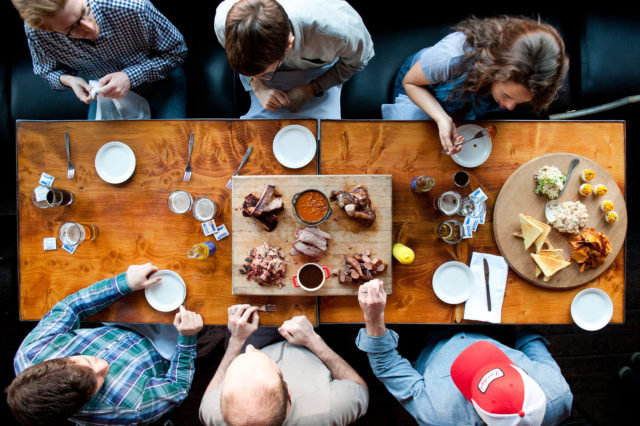 Historically speaking, it’s India pale ale partly because English colonialists craved a bitter beverage to pair with India’s spicy curries — try it, it’s phenomenal — and partly for marketing purposes back in England. The moniker “India pale ale” first appeared in print in 1835 but it would be years before the style was standardized or developed into anything resembling what you’d find in taprooms today.

Jump ahead to 1975, and Anchor Brewing in San Francisco rejuvenated the hoppy ale with Liberty Ale and used copious amounts of Centennial hops to give the beer a bitter kick. Two hundred years after Paul Revere’s midnight ride, the American-style IPA was born.

Both Liberty Ale and England’s best known IPA, Worthington’s White Shield, were a celebration of hops — the one ingredient that binds and ties IPAs of various shades across time and space. By 2005, IPA had become the most entered category at the Great American Beer Festival, a throne it has yet to relinquish and probably won’t anytime soon.

Nowadays, you’d be hard-pressed not to find an IPA on tap at your local brewery. Even those dedicated to lagers brew one or feature a guest one because it just makes good business sense; Wibby Brewing and Prost Brewing feature hop-fortified IPLs (India pale lagers) in lieu of their aromatic ale counterparts.

But those are the outliers; most don’t just pour IPA, they are flush with them: black IPA, red IPA, white IPA, wheat IPA, rye IPA, Belgian IPA, West Coast IPA, New England-style IPA, mountain IPA, imperial IPA, triple IPA and session IPA. Avery Brewing even makes an activated IPA, brewed with sodium and potassium, and VisionQuest Brewing has a coconut IPA — chewy and fantastic. With mind-boggling permutations and combinations, there is seemingly no end to what an IPA can be or do.

Furthermore, all these hoppy variations on a theme seem to lead to some confusion in the marketplace. Average drinkers don’t know the difference between ale and lager, let alone one IPA from the next. In this regard, many have come to identify IPA as synonymous with craft beer. The “I” may stand for India historically, but in today’s taprooms, IPA might as well be independent pale ale.

Need proof? Head over to Boulder’s West End Tavern for Jul-IPA, a summer celebration of America’s favorite craft beer style. All month long, West End has been rotating through varied versions of Colorado IPAs, from Odell Brewing’s bracingly bright IPA (a true classic) to purveyors of the hazy/juicy variety: 4 Noses Brewing and Crooked Stave Artisanal Beer Project. Wibby’s aforementioned IPL will be on tap, arguably the most modern version of the style.

IPAs are pouring every day at West End, but its rooftop grand finale party is Sunday, July 28, 1-4 p.m. Tickets are $35 and include beer, BBQ, live music, an auction and tastings of Breckenridge Bourbon. Details at thewestendtavern.com.