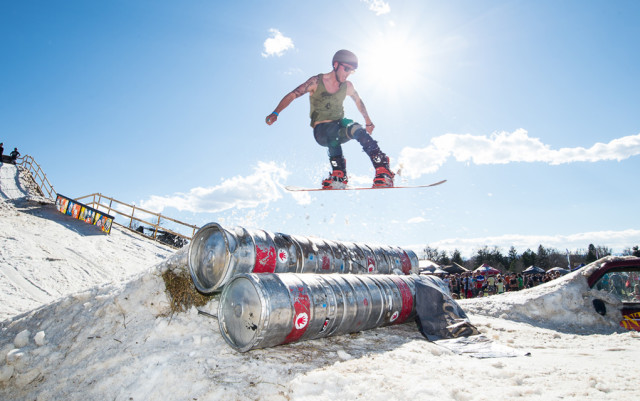 The event pairs over 60 craft breweries with a massive four-story snowboard ramp built and prepared in Roosevelt Park. There’s also going to be music from Sam Bush, Jeff Austin and Rapidgrass.

Bringing together so many breweries while also constructing a 40-foot-high ramp in the middle of a park is an exercise in patience and logistical planning, says Josh Goldberg, Left Hand’s community and events manager.

“Getting permission to use the park is no big deal,” Goldberg says. “But when you talk about creating a four-story structure, a ramp in the middle of the park, people start going ‘Woah woah woah, what’s going to happen to the grass, what happens if someone falls off the ramps?’”

But Goldberg says everyone involved has worked to ensure the safety of its participants, the attendees and the grass. In order to build the ramp, Left Hand hired a scaffolding company to build the skeleton. Then boards were placed along the ramp, and rails shipped in from Winter Park were assembled. And from Friday to Saturday morning, dump trucks are dropping off loads of snow freshly culled and delivered from Winter Park also.

The resulting ramp will be the stage for 200 male and female snowboarders from across the country to participate in a competition at 1 p.m. There will also be smaller courses set up for teens and beginners nearby.

But this is a beer column after all, and Hops + Handrails is, at its core, a beer festival. Attendees will be able to sample 150 beers from over 60 breweries by purchasing a $30 sampling pass. Participating breweries include locals like 300 Suns, Avery, City Star, Fate, Grossen Bart, Odd13, The Post and Upslope, as well as out-of-towners like Dogfish Head, Boston Beer, Firestone Walker, Ninkasi, Sierra Nevada and Telluride.

Goldberg says when the event started four years ago, Left Hand had trouble finding enough local breweries to participate. Now that the Colorado scene has officially boomed, Left Hand has received dozens of calls from breweries trying to get in on the action. As the event grows in future years, Goldberg says the brewery is planning to accommodate and include as many breweries, particularly local ones, who want to participate.

The event also raises money for charity. Proceeds will benefit SOS Outreach and Chill, nonprofits that help at-risk youth stay on the right path by getting them onto the slopes. Proceeds also benefit the Left Hand Brewing Foundation, which supports charitable causes locally and world-wide.

Goldberg says the real clincher of the festival, and what has contributed to a massive exponential rise in attendees year after year, is that it brings music, snowboarding and beer to Longmont, and puts the city on a grander cultural stage.

“It’s a beer festival unlike any other beer festival in Colorado,” Goldberg says. “Our goal is to bring the mountains to the people, and what’s most unique this year is bringing in a music lineup like our town has never seen before.”