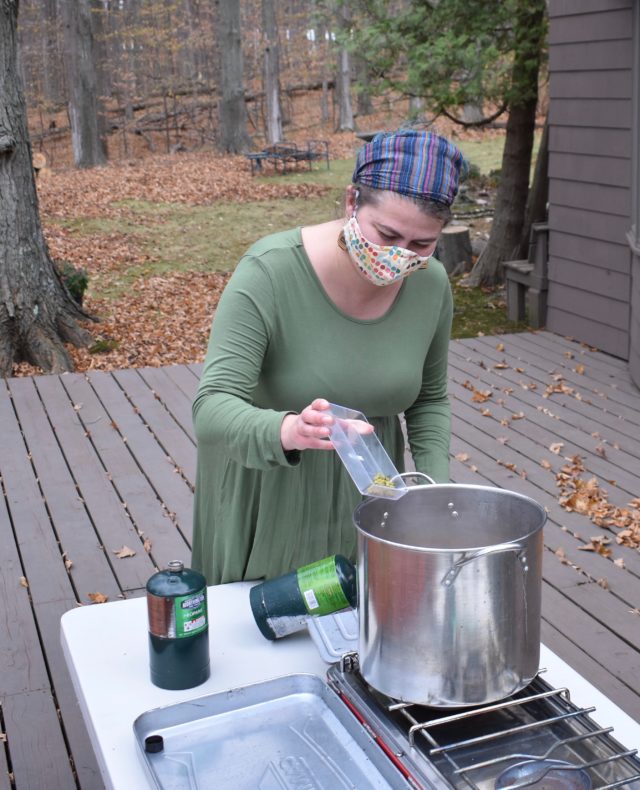 What is civilization if it isn’t people talking to each other over a goddamned beer? — James S.A. Corey, Cibola Burning.

While I suspect there’s more that goes into civilization than beer, I think beer is a pretty good place to start. And homebrew might even be better.

During what has been a tumultuous eight months, one of the significant activities that brought me solace is engaging in fellowship with other beer lovers. As an extrovert, the shelter-in-place order had been especially challenging for me, but I was grateful for Zoom happy hours, virtual homebrew club meetings and Homebrew Con online. There is something special about the homebrew community that spans long distance, virtual communication — it’s a group of accepting, warm people eager to listen and share their passion with others. I’ve never been part of anything like it.

This past Sunday, my local group in Michigan, Heartsease Homebrew Club, gathered for our first socially distanced brew since pre-COVID times. Though very different from previous group brews, the ability to come together as a homebrew community was rewarding and cathartic. We approached the brew with health and safety as our utmost priority: brewing outside, wearing masks, maintaining a distance of six feet or more and sanitizing everything. In the weeks leading up to the brew, we were giddy with excitement — it had been so long since we socialized this way.

Brew day arrived, and it was 68 degrees and sunny. We were hosted by two of our club members, Daniel and Christine Broder, who live on a gorgeous property deep in the woods with a breathtaking view of a nearby lake. I couldn’t imagine a better place to brew. As we were setting up, we saw a bald eagle gracefully floating in the sky above the lake — a good omen to set the day’s mood.

The beer we selected: American IPA. Our malt bill was a blend of pale base malt, Munich malt and a small portion of caramel malt. We wanted to rely on a substantial malt backbone to balance out the heavy hop load — Columbus for bittering at the start of the boil, then Trident and X09326 Experimental additions at 30, 15 and 0 minutes. (We’ll use Trident and X09326 for dry hopping once fermentation is complete). Our club is fortunate to have access to reverse osmosis water, which provided a blank slate for us to build our water profile, so we added varying amounts of gypsum, calcium chloride, Epsom salt, magnesium chloride and canning salt. For yeast, we used SafAle US-05 because we didn’t want an overpowering yeast flavor. We’re aiming for bold, tropical flavors with subtle notes of citrus and passion fruit, and SafAle US-05 is clean, crisp and allows the malt and hop flavors to shine.

During the inevitable brewing downtime, Daniel lit a campfire, and we cracked open a few beers. As we spread out around the fire, you could feel the group taking a collective deep breath and letting it out — the weight of the past eight months lightened simply by joining together. Our conversation spanned many topics, some about homebrewing, but most of them about the struggles of coping during the pandemic, the everyday things we missed, and our hopes for the future. It was a reminder that beer has the power to unite despite differences in backgrounds and walks of life.

What to drink with what you eat

As you start to plan your Thanksgiving menu, don’t forget to take beer into consideration. I suggest choosing just one beer for the actual meal and testing out these various pairings with your leftovers — but the power (and beer glass) is in your hands.

Turkey: Turkey usually has a mild flavor, so avoid beers that are brash and overpowering. Märzen’s German hops have a mellow yet present bitterness that’ll cut through the fat, while the malt’s warm, toasty notes and soft sweetness will accentuate the turkey’s natural juices.

Stuffing: Hearty, savory and made with a mélange of spices — I recommend Midwestern-style IPAs. The clean, slightly sweet malt profile won’t overwhelm, but the medium- to high-hop bitterness will stand up to the spices.

Mashed Potatoes: Whether creamy or chunky, buttery, garlicky or doused in gravy, mashed potatoes have a way of weighing down the palate. They call for one of my favorite overall food beers: Belgian tripel. The higher alcohol content and spice will break through the heavy starches while the beer’s refreshing effervescence dances across the palate.

Pumpkin Pie: Pie is my favorite part of the Thanksgiving feast, especially when served with a dollop of whipped cream. As I have many times in the past, I will be pairing my pumpkin pie with a pint of oatmeal stout. When combined with the velvety pie texture, the stout’s creamy mouthfeel will result in an all-around decadent experience. The darker malt used in the brew evokes dark chocolate and roasted coffee both in aroma and flavor. And when paired with the pumpkin pie spice and flaky crust, you’ll realize it’s a much better partner than a post-dinner coffee.