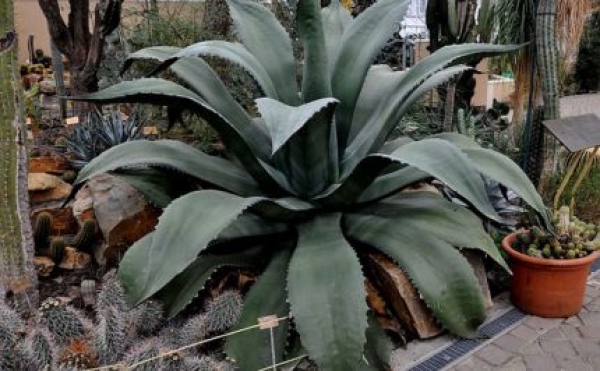 Agave, the plant most widely known for its use in the making of tequila, is staking its claim in Boulder with the release of Tatanka, an American agave spirit being made locally by Roundhouse Spirits.

Tatanka is an American alternative to Mexican tequila, which uses the fermented sap of the agave plant. Agave — a large succulent not to be confused as a type of cactus — is similar in appearance to aloe with its long, flat leaves covered in spines. Blue weber agave, or Agave tequilana, is responsible for the production of tequila. However, Tatanka is made with Agave salmiana, or Giant Agave. Ted Palmer, president and distiller at Roundhouse, explains that they chose to use salmiana over blue weber due to its higher quality. Palmer says that when he originally worked with agave several years ago, blue weber was incredibly fresh.

“It had stuff floating in it, that’s how raw it was,” he says, referring to the plant’s sap. As agave has become more commercially available, the quality has suffered.

“It all goes to these two big factories in Mexico where they take all of that raw agave and push it through a carbon filter and it removes all of the color, aroma and flavor,” Palmer says. “It’s now just really expensive corn syrup.”

The name “tequila” is also regionally specific to the Mexican state of Jalisco.

“We can’t call it tequila, so why should we bother trying to get blue weber agave?” says Palmer.

After tasting multiple samples and conducting experiments on other plants, Roundhouse settled on Agave salmiana.

A handful of other craft distillers are producing and bottling agave-based spirits. However, Roundhouse has an exclusive agreement with a producer in Mexico for their Agave salmiana. Prior to receiving salmiana, “they cut off the leaves and put them through a roller and squeeze out the guts, which we get as a syrup,” Palmer says.

The fermentation process can be much more difficult than your typical spirit, explains Palmer. Salmiana’s sugars mostly consist of fructose, which is quite a bit more fickle than maltose, the sugars in barley used to make whiskey, which contain natural enzymes beneficial to the fermentation process.

“We started off using different kinds of yeast from local breweries and they’d eat for a little bit, then go dormant,” says Palmer. Palmer then dug into his chemistry and biology background, having attained a degree from the brewing-focused Siebel Institute of Technology.

“I looked at the yeast vintners use because there’s a lot of fructose in grapes and wineries often have a problem where the fermentation stops halfway through,” he explains. “They pitch another type of yeast that like fructose, so I got some of this type of yeast and have been using it ever since. It’s a pain in the ass.”

After fermentation, the agave registers in it at 3.5 to 4 percent alcohol by volume, much lower than the 10 percent Palmer was hoping for, so Tatanka is distilled three times before being bottled.

The aroma is indicative of tequila, with a warm alcohol nose. However, the flavor is a bit sweeter, with earthy notes and a touch of honey.

“It makes a fantastic margarita,” says Palmer, explaining that at the tasting room they serve it both with lime and “coin style” with orange liqueur.

Tatanka American Agave is currently available as an unaged blanco, but future productions will be aged in oak barrels and Roundhouse will release both a reposado, aged two months to a year, and añejo, aged a year to two years.