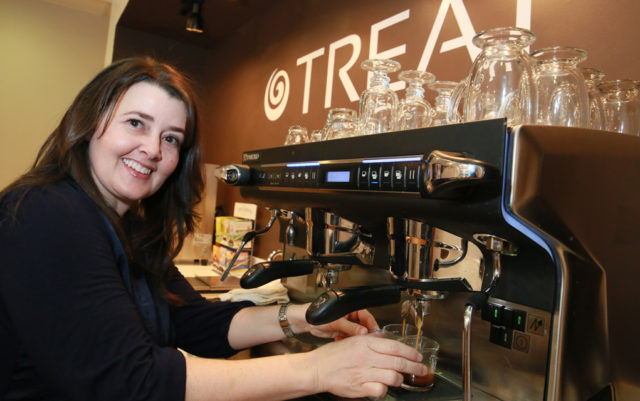 The opening of Treat Snack House last week represented an achievement for the greater Longmont restaurant scene. And for Boulder County in general. That we can now not only incubate but support the opening of a restaurant dedicated solely to the humble snack is evidence of a food-savvy customer base willing to go where bold restaurateurs take them.

The bold restaurateur in this case is Susan Nowlin. A longtime resident of Longmont, she’s seen the transformation the city’s food scene has undergone in just the last decade. Could a snack-focused restaurant have survived in Longmont 10 years ago?

“Maybe not,” Nowlin says. “But I think anywhere it might have been more difficult. And I think with food establishments coming more alive in Longmont, I think that lets the organic interest in there.”

Despite its growth, Nowlin believes Longmont has been able to retain its hometown feel, which appealed to her when deciding where to open the shop. That sense of communtiy extends to a collaborative and supportive restaurant industry.

“Everyone is really pulling for you and really just kind of cheering you on,” she says. “I don’t know if you find that anywhere else. It’s very unique, I think.”

So what exactly is everyone pulling for in Treat Snack House? Nowlin says the concept has been in the works for several years, and the idea is to provide a place for people to meet throughout the day, for a variety of functions, with a variety of food options available to them.

That sounds broad, but so is the category of snacking. Nowlin says the development of the menu has been an ongoing process, trying to find the right balance of sweet, savory and salty with regards to flavor, and a spectrum of substance, from light to heavy.

The opening day menu doesnt look like other menus. It’s takes a minute to calibrate — plenty of drinks from coffee to mocktails to hot cocoas, and large sections of snacks and sweets. Snacks include basics like parfaits and veggie platters, and prepared dishes like quiche, muffins and salads. The sweets include cakes, brownies and cobblers.

If it seems like there’s too much distance between those items, you can order a snack flight and build a mini-meal.

Part of the challenge in opening Treat was reigning in something as broad as people’s collective notion of what constitutes a snack, Nowlin says.

“In researching this, there were so many articles about a treat versus a snack. If it was a treat, it was an indulgent, sweet thing you weren’t supposed to have. If it was a snack it was healthy; fruit and veggies and that’s it,” Nowlin says. “To me, they can be married together. So you can have something healthy but it can be indulgent or energizing. At the same time you can have something indulgent but that’s made with things that are better for you, organic cane sugar, foods that are unprocessed, foods made down the road, where it’s a special indulgence.”

Some might call Treat a boutique or niche shop, but it has precedence. As a space to hold meetings, meet friends, have a quick bite or a light lunch, it mimics a bistro. It provides a destination for people just looking to get out in Longmont or take a break while perusing Main Street. Nowlin says she took business trips to New York and Chicago before opening to see other restaurants that share the concept, but found more often than not, those places targeted certain categories: drinks, desserts or savory small bites.

But Nowlin says that the research she studied indicates there is a desire for healthier treats available in a cafe setting. As part of her preparation for opening the shop, she got a catering license to see first-hand what small bites people were craving and how they could be turned into a business.

Nowlin also took a barista training course with Ozo Coffee Co. to learn the coffee brewing ropes, leaving the experience “with a newfound respect for baristas.” But coffee (brewed from Conscious Coffee beans) is one item that will draw people into Treat, where they can get a better sense for the shop’s concept.

To ensure the food was solid, though, Nowlin hired a chef and the two have gone back and forth developing the menu. Instead of viewing the need to source a variety of ingredients for a variety of dishes as an issue, Nowlin views it as an opportunity to source locally grown, seasonal food. It keeps the menu fresh, supports other Longmont food producers and ensures Treat’s offerings are on the healthier side.

Certainly Treat could work in Boulder; it’s not too hard to imagine it packed on Pearl Street on any given Saturday. But like many artisans and entrepreneurs, it’s Longmont that is providing fertile ground for those looking to provide new, interesting food operations. Many will be on display during Longmont Restaurant Week, April 20-29, where restaurants will sell specials and prix fixe menus for $18.71. Treat is offering a couple options for those who stop by, including a three-course “snack for 2” meal with chips and jalapeno popper dip, sweet potato and goat cheese empanadas and a mini bundt cake with chocolate ganache.

It’s a pedestal for Longmont restaurants, and Nowlin, new to the scene, is happy to be a part of it — both the celebration and the burgeoning culinary community.

“I think we wanted to be part of that growth, ride the wave,” Nowlin says. “It’s been fun because I love seeing new businesses come in and to be one of those is pretty exciting.”