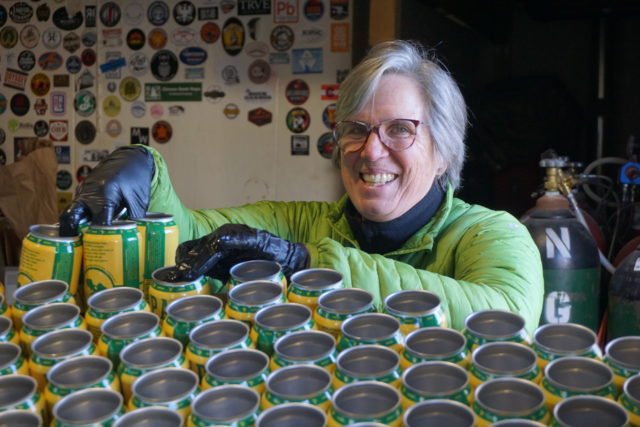 It’s fun work if you think of it that way,” Joe says with a grin, grabbing empty beer cans, six at a time, and arranging them on the stainless steel chute. He’s right: This is a lot more fun than work. Cold, but still fun.

But it’s Colorado in January, so it’s supposed to be a little cold. Especially when the dock doors are up, and the Crystal Springs Brewing Company’s canning operation is going full tilt.

When Crystal Springs opened in 2010, owner/brewer Tom Horst operated a 20-gallon (two-thirds of a standard barrel) system out of his garage in Sunshine Canyon. Wife Kristy handled sales, and a few key accounts around town stocked their beer. Demand grew, and so did the need to expand. So, in October 2013, the Horsts’ opened a 15-barrel production brewery and taproom in one of Louisville’s industrial parks.

Now entering its second decade of business, Crystal Springs continues to expand — adding a cozy taproom in Louisville’s historic downtown in 2017 — and production continues to grow. Now there are a few more hands behind the beer besides Horst’s: Timmy Russell, Crystal Springs’ cellar master, has been with the brewery for six years now, and on canning days, Russell is the unofficial master of ceremonies.

Crystal Springs uses a Wild Goose canning line — the company is headquartered down the street — and packages once or twice a week. As Russell explains: Joe picks up the empty, pre-labeled beer cans from a shipping pallet and places them on the chute, or “the whale’s tail,” as they call it. The chute holds about 50 cans, which get funneled down to a single-file line. A conveyor belt then snags a line of four and pushes them along to the purging and filling station. Two needles are dipped into the can and blast out any particulates. The next two heads fill the purged cans with beer, foam bubbling over the rim. As Russell explains, a thick layer of foam keeps out any excess oxygen.

Now brimming with beer, the cans ride along the conveyor belt to the next station, where loose lids are dropped on top. The next stop presses the lids down, spinning the can 360 degrees to crimp and seal the lids.

The complete package is rinsed with water and comes off the line where Deidrick grabs them, two at a time, rolls them on a dry towel, and places them on a cardboard flat — facing the labels in the same direction, so the sales team doesn’t have to spend time spinning cans when they drop the sixer off at the store. Anything to make the next person’s job a little easier.

After Deidrick fills a flat with 24 cans (a case), Don squeezes between the whale’s tail and large tank and snags the flat from Deidrick’s station. At Don’s table is a stack of plastic six-pack carriers, each one stickered with the date. Don grabs the carrier, snaps it to the top of the cans, four per flat, and then the flat is stacked in the cooler where it will await the sales and shipping team.

The whole process takes less than a minute.

The atmosphere is light and jovial, and no one struggles to keep up. Though, as Don points out with a grin: “When that line is running balls to the wall, it’s hard to keep up.”

And, save for Russell and Deidrick, they’re all volunteers.

Every week, Crystal Springs announces via email when and what they plan to can, and for how long. Anyone is free to join (compensation is a six-pack of your labor), and they can accommodate about four or five volunteers. Though, as Don is quick to point out, it gets pretty tight with six.

Don says he’s a “regular whenever” volunteer. He was here last week, but next week he’ll be in Seattle visiting family. While he’s gone, someone else will step in and clamp down the six-pack holders. When he’s back in Colorado, he’ll lend a hand again, doing whatever is needed.

Back at the whale’s tale, Joe explains his connection to the endeavor: Family by way of marriage.

“Here’s my better half,” Joe says when Patsy shows up. She starts by loading the whale’s tail with empties before it’s time to box up the unused IPA cans for next time. Patsy is Horst’s sister, and the couple fills in whenever spots are vacant.

It’s also the hallmark of American small business: Family and community. Grab a can of Crystal Springs IPA (or Naughty Marilyn, or Doc’s Porter, or Summertime… you get the point), and you’ll see the upside-down beer bottle certifying Crystal Springs as a craft brewery.

That trademark comes courtesy of the Brewers Association — the Boulder-based trade group representing America’s small and independent brewers. To be certified craft, a brewery must be “small” (produce less than 6 million barrels of beer a year) and “independent” (not owned or controlled by another non-craft brewer to the tune of 25%).

But, as canning at Crystal Springs reminds: No brewery is truly independent. It takes many hands to make the beer, and it takes a community to support the business. Most rally in front of the bar, drinking the wares and choosing this local family business over large, impersonal conglomerates.

Sometimes that community slips behind the bar as well, pitching in to help the business function and grow. Not just for the quid pro quo of a six-pack of IPA, but for the satisfaction that comes with helping something you believe in.

Quality beer will only get you so far. Business acumen helps as well, but it’s community that carries you across the finish line.