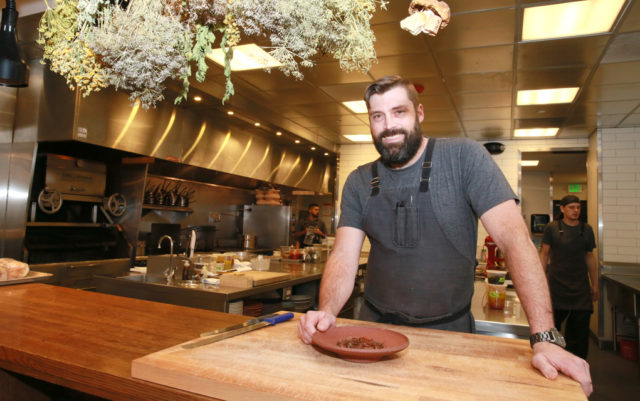 Kyle Mendenhall — the chef who helped launched The Kitchen’s national enterprise, and whose new restaurant, Arcana, was recently billed by the New York Times as the de facto savior of Colorado cuisine — has had more formal training on the oboe than he has had in the kitchen.

But Mendenhall, who received a master’s in performance from CU, says the skills he learned as a professional musician have transferred well into his work in the food industry.

“The pressure of being a musician and chef, for me, there was a very linear transition that made a lot of sense. You’re practicing a piece so that you don’t play any wrong notes and it’s repetition over and over and over again,” Mendenhall says. “And it’s the same in the culinary world, where you’re creating dishes out of food and you don’t want to make any mistakes … so it’s just sort of like practice but it all happens in the moment. There’s no, ‘I worked on this for three months and here, it is finished,’ it’s like, ‘I’m going to perform today, perform tomorrow, perform the next day.’”

By all accounts, Mendenhall was going to be a professional musician. Playing the gigs he could get worked for a while, but when his wife (also a musician) got pregnant with their first child, plans changed. Mendenhall researched the average salaries of various professions — landscapers, used car salesmen, for instance — figuring he’d need about $50,000 a year so his wife could raise the newborn at home. Cooking, which Mendenhall had done on a very part-time basis to supplement his income, was what he’d do in a perfect world. So it was fortunate that a friend whom he’d met while working at Boulder Country Club offered him a job as a chef at a similar club in Steamboat.

But he had never run a kitchen, let alone worked in one for more than 20 hours a week, at most. The challenge of learning to cook, manage staff and run a business was all uncharted territory.

“Fear is a pretty good motivator,” Mendenhall says. So he perused the aisles of the old Borders on Pearl Street for a book that’d give him a crash course on professional cooking. He found a textbook from the Culinary Institute of America, and started to download the information from it. Something clicked.

“The time and energy I lacked [in order to] be very diligent about practicing and making a musical career happen, all of a sudden when it was in the culinary world, I didn’t have any problem. I worked 12-hour days, plus, and I’d come home and read books,” he says.

The life of a country club chef helped spur Mendenhall’s culinary evolution. Club members pay dues, and generally expect consistency above all else in their food. Free from financial burdens, and given an opportunity to hone basic skills, Mendenhall thrived making classic dishes from roasts to burgers. Eventually, his natural creativity emerged, and he began to tweak recipes and figure things out via trial and error.

After two years, Mendenhall switched to a more lucrative job at a country club in Evergreen. That experience, he says, was a “horror story,” in which he only took two days off in nine months. Though he was making more money than ever before, “it didn’t matter,” he says.

So Mendenhall and the club parted ways, and over the next three months, he took a vision quest throughout the Front Range dining scene. He staged at Frasca, Fruition and The Kitchen — all the places he’d read about as having quality culinary programs. It confirmed his desire to elevate his career into “fine” dining, or at least into cuisine that focused more on quality ingredients and technique. Seeing how those kitchens operated, Mendenhall says, also gave him confidence.

“It was very eye-opening because it was like, ‘I can do this,’” he says. “You read about something and it gets sort of blown up. Even now we talk about the Nomas and the amazing places known around the world, but then you get there, like The Kitchen… I work hard, I can do this. I can take direction. You show me how to do something and I understand why this tastes better or why to do this that way.” 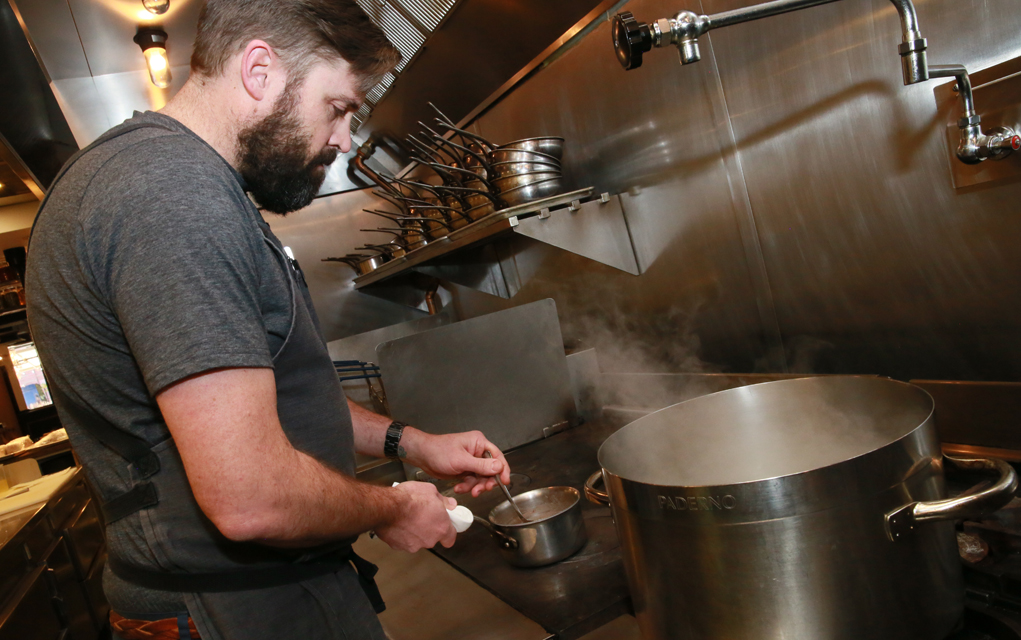 Also eye-opening was the respect The Kitchen had at the time for local ingredients. So when Mendenhall was offered a job as a manager there, he eagerly accepted. Soon he was elevated to chef, and then an eight-year saga began, where he moved his way up to overseeing the launches of Kitchen Next Door restaurants throughout the state and in Chicago and Memphis, with a 450-person staff.

For all that The Kitchen gave him — a career, a passion for local food, a refined skill set, all of which Mendenhall says he’s grateful for — the company was losing sight of its initial vision, he says. When it become obvious that in the name of scaling up, The Kitchen was losing relationships with local farmers that Mendenhall valued, he spoke up.

“I was one of the last ones left of an early, more mom and pop kind of day,” he says. “I’d be like, ‘Hey, we get this from Cure Farm. Anne and Paul, our friends.’ And then the discussion was more like, ‘We can get that from anybody, it doesn’t really matter’. [But] we don’t know, maybe they’re spraying chemicals. [Local, sustainable food sourcing] is what we’re actually foundationally based on. This is what we’re preaching to the whole world. This is who we are, and if we’re not doing that then we have to reevaluate or at least be real with ourselves.”

He briefly thought of opening his own restaurant with the core concepts he learned at The Kitchen, but when the opportunity came to take over the “blank slate” that was Arcana, he couldn’t resist. The kitchen was magnificent, he’d already worked with much of the staff (many at The Kitchen), and there was a commitment to building and preserving local food relationships.

For their work, Mendenhall and the staff at Arcana were recently rewarded with a rare glowing review from the New York Times, whose writer wrote that the restaurant was taking old Colorado and making it new. That struck a chord with Mendenhall, who, 12 or so years after quitting professional music, was still using those skills to promote his new passion: local food.

“When I used to make oboe reeds, which are made from cane, an organic material, some pieces are denser than other pieces and what you’d do is you get good at sort of making the reeds where you have to carve them with a little knife so they vibrate a certain way. You get good at that skill; you don’t get good at growing perfect cane. What you do is you get good handling of that organic, ever-changing quality. I think it’s a lot the same in the kitchen with dishes [and organic ingredients],” Mendenhall says.

Mendenhall doesn’t play music anymore — the oboe is tough to pick up and jam on, he says — but he lives vicariously through his musician wife and two musical sons. But his earlier life still pops up in Arcana.

“Every once in a while in the restaurant the Mozart oboe concerto will come on amidst all the other more contemporary stuff,” he says. Fitting for the chef who’s making old new again.