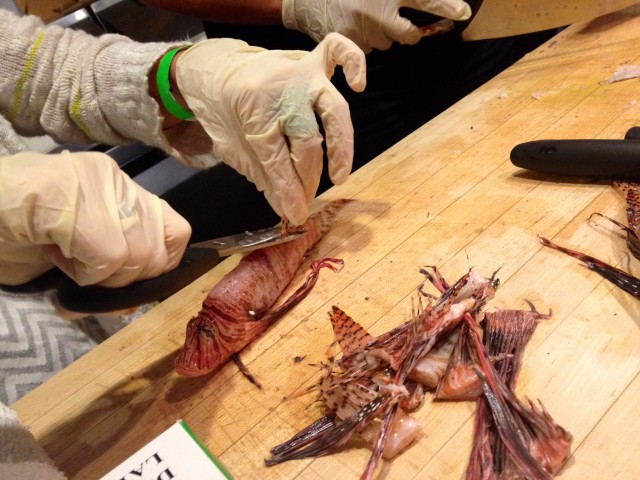 Toward the end of her standing ovation-receiving speech on Sept. 29, Sara Brito, executive director for Chef ’s United, indulged a moment of levity.

“Every revolution has a t-shirt,” she said. “We need you all to get a t-shirt. They’re available outside those doors.”

The reason why is that the t-shirt made clear the mission of Brito and the event at which she was speaking, the Chef ’s Collaborative Summit: “Change menus. Change lives.”

The 21-year-old organization runs an annual summit of food industry and sustainability philosophers, aiming to push big ideas to cultural innovators that can help change the way we eat for the good of all. Part tent revival, part business seminar, part TED talk (all snackfest), the summit went down Sept. 28-30. And for the first time it was held here in Boulder, flooding downtown with hundreds of chefs, food industry professionals, environmentalists and eaters. Well, hundreds more, anyhow.

“Food actually leads culture,” said Brito. “What happens with food affects every element with life. The clothes we wear. The houses we build. The things we fill those houses with. The things we use to clean those houses. How we move around in life. Food really does mean more than food.”

Kim Severson, writer for The New York Times and the event’s emcee, expanded on Brita’s thoughts in her opening comments.

“The class division as it is defined by food, culturally, is huge right now,” she said. “That means you’re [chefs] taking on the role of traditional civic leaders in many ways.”

Many of the standard topics were hit hard, among them, the dangers to fisheries, antibiotics in meat and GMOs.

“More than 80 percent of Bristol Bay’s residents are opposed to the Pebble Mine,” said Elizabeth Herendeen of the Bristol Bar Regional Seafood Development Association.

The history and many ills of antibiotics in meat:

“Antibiotics are not a thing that happens at factory farms,” said author Maryn McKenna. “They are the thing that makes factory farming. If we didn’t use antibiotics to protect animals from the conditions they are held in, it wouldn’t be possible.”

“Ninety-one percent of people polled support labeling [GMOs],” said Gary Hirshberg, of Stonyfield Organic and Just Label It. “More than a million people have signed the petitions. That’s the most in history of the FDA.”

But in addition to the red meat thrown to the sustainability sharks, there were a lot more esoteric and innovative presentations.

One of the most interesting and potentially controversial came from Chris Kerstand, from the Savory Institute. While most environmental thinkers are advocating less beef in order to cut down on the damage done by cattle, Kerstand made the case for the opposite: expanding herds of cattle, but altering grazing patterns to be more dense and more mobile.

“We always want to mimic nature,” Kerstand said. “And this is how nature works. With large herds of stock that are constantly moving.”

He showed a series of dramatic before and after pictures that illustrated how large, mobile herds had helped restore desertified pastures through stamping down manure and not overpicking certain grasses, which helps to expand their root systems.

Cory Carman, of the Carman Ranch in northeastern Oregon, spoke of her ranch’s success restoring pastures with the technique.

“We started to realize that as ranchers, our primary crop was grass,” she said. “And proper management of it lead to healthy cattle and tasty beef.”

Another seminar covered a new strategy to deal with invasive species: Eat them.

“As I was flipping rocks up in Nova Scotia one day, I saw someone picking perriwinkles, which where I live is an invasive species,” said Joe Roman, a conservation biologist and “Editor n’ Chef ” of www.EatTheInvaders.org. “And I realized that there’s no bounty. Pick as many as you want. In the case of invasives, we don’t want sustainability. Extinction is the goal. Hit them as hard as you can.”

Attendees were then served a meal of sashimi made from lionfish, an invasive species which has been decimating snapper and grouper populations all along the East Coast.

“It’s rare that you can have a guiltfree pleasure,” said Roman. “This is one of those times.”

Bun Lai, the chef at Miya’s Sushi in New Haven, Conn., prepared the lionfish, and also served a soup made from invasive seaweed and discussed his future plans to cook with invasive species of earthworms.

“Invasive species are a top five ecological problem,” he said.

“At the consumer level, it’s hard to make a difference,” said Roman. “But at the chef level, there is a lot of power. And most of it helping get over the disgust. Eating invasives sounds disgusting to most people, but 30 years ago, so did the idea of eating raw fish.”

But perhaps the most important panel was one that addressed the biggest challenge for high-quality food: scale.

“We serve about a million people a day,” said Nate Appleman, chef for Chipotle. “That presents a lot of issues. But also a lot of opportunity. We have pretty high standards that we set for ourselves for the things that we buy. There’s not a lot of meat out there that meets our standards.”

“You have to create the demand,” said Bobby Stuckey of Frasca. “[Distributors] are not going to leave money on the table. Now, if more people do real food and use these real products, then those people on the distribution end will have to take care of that.”

That panel’s moderator, Katy Keiffer, then followed up with a question about lax definitions, and if those hampered the ability to make our national food system more healthy, an issue Boulder Weekly recently addressed as well.

“There’s no standards for the things on packages,” said Appleman. “I’ve seen companies talk about how there’s no hormones in their chicken. But it’s been illegal to put hormones in chicken for 30 years. I walk into stores and I’m confused, and I shouldn’t be.”

That was then followed by a discussion of which would be more effective, government-issued definitions, or the market forces of large companies like Chipotle simply demanding higher quality food.

Another speaker, Steven Satterfield of Miller Union in Atlanta, summarized much of the struggle.

“The landscape of sustainability is always changing, always evolving,” he said. “New things are coming up every year and as chefs, we must react.”