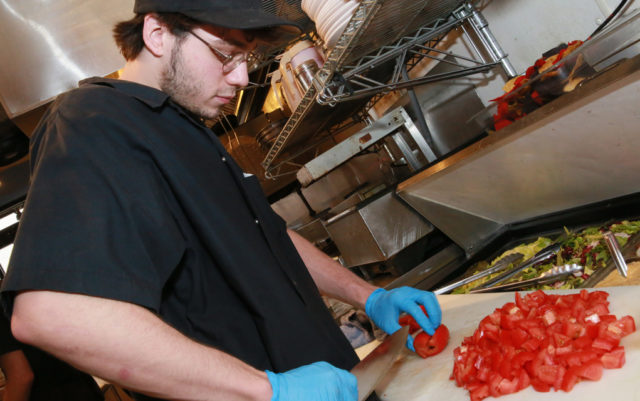 It used to be the case that people would be lined up out the door to get a job in the kitchen at Flagstaff House — at least figuratively. Whenever there was a staffing shortage, Executive Chef Mark Monette and Chef de Cuisine Chris Royster could reach into a stack of resumes and fill the void with someone with a little experience, skill and desire to learn.

That’s not the case anymore at Flagstaff House. Nor is it the case at most restaurants in Boulder, where kitchens have gone months, sometimes years, without operating with a full staff.

“Two years ago [the supply of workers] was really abundant,” says Royster. “You had people come up here and want to be a dishwasher while they learned how to use a knife and then move on to a cook’s position. They had this idea of wanting to become a chef and wanting to give it a go and I think that was a very regular thing for a while. Recently, you haven’t really seen a lot of that, which is kind of shocking.”

Over the last two years, Royster says he hasn’t been able to go more than three consecutive months with a full staff.

All one needs to do to understand the breadth of this employee shortage is to visit Craigslist. In the three days before this story went to press, 120 new, legitimate job offerings were posted in just the Boulder area for restaurant positions. It’s hard, in talking to restaurant owners, chefs and marketers, to have a conversation that doesn’t circle around, at some point, to the issue of staffing.

There have been several hypotheses offered as to why there is a shortage of available kitchen workers, but popular theories blame the oversaturation of restaurants, a low unemployment rate, Boulder’s cost of living, the marijuana industry siphoning off talent and immigration enforcement concerns. Likely, it’s a combination of all five, but each factor on its own would have, and has had, devastating effects on the industry.

Royster says he constantly has ads posted, but believes the abundance of jobs available to potential kitchen workers is the biggest issue.

“The restaurant scene in Denver and Boulder is … booming and there’s so much going on, but that also means that there [are fewer] cooks available because there are so many more places to go,” he says. “Which is great if you’re an eater … but it makes it very difficult to hire cooks.”

Lenny Martinelli, of Three Leaf Concepts, which operates several restaurants in Boulder County, including the Dushanbe Teahouse and The Huckleberry, says a 2.5 percent statewide unemployment rate just doesn’t provide the stock necessary to fill kitchens. That poses issues to restaurateurs who try to retain low-level kitchen staff, who know there are always greener pastures elsewhere if their needs aren’t met, Martinelli says.

“The price of employment has gone up tremendously in the last three years just because it’s had to,” he says. “People can demand more money. When people demand more money, we have to find it some place. That means [menu] prices increase.”

Martinelli says dishwasher costs have gone up $3 an hour in the last two years, about which he says, “the humanist part of me is like good for them. The business part of me is just like we can’t keep tightening this without charging more money for the food.”

Ben Kaplan, owner of the new Pearl Street restaurant Emmerson, and partner at OAK at Fourteenth, says he’s had to spend nine times as much as he usually has on recruiting staff for his new restaurant, and that OAK has had job ads placed indefinitely for the last few years. Kaplan says he’s had to bring in middle-level kitchen staff from out of state in order to meet the talent gap created by this dearth of workers.

By far the most publicized black sheep for a small kitchen workforce has been the pot industry. By offering more money, those who formerly went into dishwashing, bussing, bar-back and line cook jobs are sidling into $20-per-hour positions with the same amount of training.

Bobby Stuckey, co-owner of Frasca Food and Wine, told Bloomberg earlier this year that, “No one is talking about it, but Colorado’s restaurant labor market is in Defcon 5 right now, because of weed facilities,” adding that Frasca, Pizzeria Locale and his other endeavors lose one kitchen worker to a pot job every few weeks.

Dave Query, owner of the Big Red F restaurant group, voiced his displeasure at this trend in a letter that ran in the company’s summer newsletter.

“Why grind it out in a kitchen at $14-$15 an hour when you can be a trimmer at a grow facility, get blazed and listen to your favorite music all day while working a regular Monday–Friday, nine to five gig — for $22 an hour,” Query writes. “Add to that scenario a pocket full of chunky big Sour Diesel or Bruce Banner #3 buds to bring home to the roomies — and it’s an easy choice.”

Marijuana also affects the staffers themselves, Query writes, explaining that walking into the staff room and getting a whiff of marijuana is normal now — though he says most restaurateurs stamp that out when they see it.

There isn’t much hard data yet to indicate how immigration policies are affecting the restaurant industry, of which immigrants have historically been the backbone. There is, however, plenty of anecdotal evidence.

I was working on a story last year in Southern California about how Trump’s executive order on immigration was impacting the local Latino community. What I’d heard then (and since: many have written about the truth of this, including Boulder Weekly) is that undocumented immigrants were afraid to go about daily routines and that, relevant to this story, they were hesitant to apply for jobs in the restaurant industry.

So I talked with the owner a popular taqueria, which employs almost exclusively Latino people, and asked if he’d had any trouble hiring people since Trump took office. Yes, he said, of course. But he also says he had trouble hiring when Obama was president, as it was an administration that deported more immigrants than any other in American history. His “Now Hiring” sign hasn’t moved from its window perch since 2006.

“This new ‘Build the wall’ thing, if I was somebody wanting to work here from the other side of the border, I’d be nervous about being here in the U.S. These are all pieces that make our job tough, because [immigrants] were huge and still are a huge part of our employment base.”

And as in other industries, it’s tough to fill out a staff in Boulder at low wages when those wages won’t be enough to pay the rent in the city. The people in the service industry that make this city tick are having to move farther and farther away, creating a bubble that may burst when there are no longer enough workers to staff the ever-growing number of restaurants. Given that real estate prices extend to commercial spots, what that means is the only entities that may be able to weather the storm of a worker shortage and increased meal prices are national chains, a move many in the industry have already spotted. The kitchen worker shortage, put plainly, could change the identity of Boulder if it’s not addressed somehow soon.

So, yikes. Chew on that for a while.