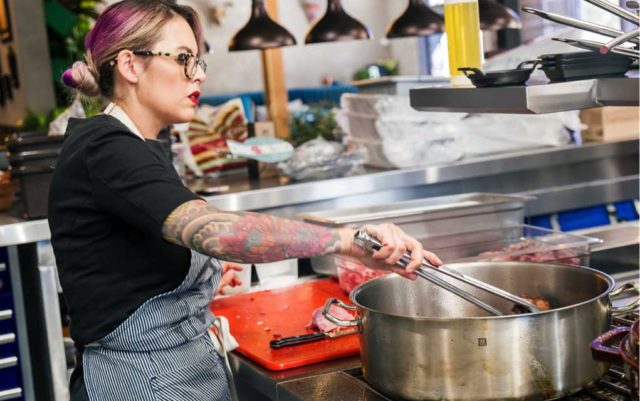 If you enjoyed a chicken mole taco on National Taco Day, raise a glass of mezcal to an unlikely hero. If you’ve “discovered” or have learned to appreciate tortas ahogadas, chile en nogada or cochinita pibil, send a thank-you card to Diana Kennedy, the 96-year-old Brit expatriate who has done more than any single individual to bring real Mexican cuisine to the world.

Among cookbook legends, Kennedy has far from a grandmotherly reputation. She is famously combative and unafraid to lambaste anyone she thinks is being less than genuine when it comes to her adopted home’s fare.

Meet chef Claudette Zepeda, the rare Latina star in a culinary stratosphere that is male-dominated and slow to accept Mexican fare as one of the world’s great cuisines. The San Diego-based Top Chef competitor and James Beard Award semifinalist was born in the U.S. and raised between Tijuana and Guadalajara. During her career as a pastry chef and executive chef she has become known for her outspoken defense of Mexican cooking techniques and ingredients.

“The bias against Mexican food in this country is wrong and slightly racist,” Zepeda says. “Mexican food gets put in this cheap food category, smothered in cheese and sauces, and that’s a poor representation of our culture.”

While Diana Kennedy won’t be on hand in Boulder, she and Claudette Zepeda will join forces Oct. 12 at Boulder’s seventh annual Flatirons Food Film Festival, a weekend of food-related cinema, tasting and education. Kennedy, who lives in Michoacán, is the subject of Nothing Fancy: Diana Kennedy,  a scars-and-all documentary chronicling her culinary career. She has inspired several generations of chefs through her iconic cookbooks, The Art of Mexican Cooking and The Essential Cuisines of Mexico.

Claudette Zepeda will launch the day devoted to immigrant cuisines with a free lecture at the Boulder Public Library about Mexican food and the common elements linking ancient cuisines.

“No food culture is one-hundred-percent indigenous,” Zepeda says. “There are lots of migrant influences in Mexican cooking and other cuisines globally that were determined by the spice trade and the slave trade.”

She notes that most Americans don’t realize how regional food is in Mexico, changing dramatically from state to state, and they also don’t realize just how long Tex-Mex food has been served in “America.”

“Research shows that the first signs of Tex-Mex cuisine appeared in the 16th century, and it has evolved ever since,” she says. “There are just a lot of misconceptions about the food. Cheddar cheese was never part of it, and neither was shredded lettuce.”

Before the documentary is shown, there will be a reception catered by a collective of the best and brightest local Mexican eateries. The menu features masa cake with red mole carnitas with serrano (Centro), cactus salad with lime and queso fresco (Comal Incubator), ceviche tostada (Comida), charred beef short ribs with guajillo (Teocalli Cocina) and halibut yuzu ceviche (Work and Class and Super Mega Bien). For the finale, a cajeta tart with horchata Anglaise from “Biker Jim” Pittenger.

For many years, Kennedy was much better known outside of Mexico and it took a ridiculous number of years before her work was translated into Spanish. She hates the moniker “the Julia Child of Mexican cooking,” preferring to be thought of as a naturalist like Charles Darwin.

“She is received very well now in Mexico because she walks the walk,” Zepeda says. “She’s a living legend. Diana does her due diligence, and she’s very respectful to the women who cook the food.”

I pulled 1973’s John Keats’s Porridge: Favorite Recipes of American Poets out of my archives. The odd volume features such gems as Edward Abbey’s Hardcase Survival Pinto Bean Sludge, Joyce Carol Oates’ Easter Anise Bread and this borscht recipe from former Boulder resident Allen Ginsberg: “Boil 2 big bunches of chopped beets and beet greens for one hour in two quarts of water with a little salt and a bay leaf, and one cup of sugar. When cooked, add enough lemon to balance the sugar, as for lemonade (4 or 5 lemons or more). Icy chill; serve with hot boiled potatoes on side and a dollop of sour cream in the middle of red cold beet soup. On side also: spring salad (tomatoes, onions, lettuce, radishes, cucumbers).”

Piece, Love & Chocolate in Boulder is an artisan chocolatier that sells all manner of gorgeous truffles, candies and chocolate pastries, but the shop’s most iconic item may be its simplest. The Amoreo is Peace, Love & Chocolate’s heart-shaped reinvention of the Oreo cookie. Crisp, gluten-free chocolate wafers sandwich an upgrade on the classic sweet, creamy filling. It’s perfect with a glass of milk or mug of drinking chocolate, though pricey if you want to plow through a half dozen.

“Most plants taste better when they’ve had to suffer a little.” — Diana Kennedy