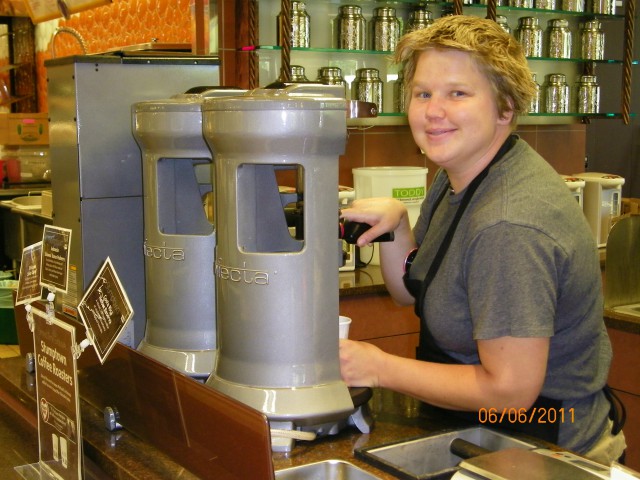 Chatting with Alfalfa’s Christina Thompson, one imagines that coffee runs through her veins: freshly brewed fair trade, single-origin, micro-roasted coffee, the kind that infuses her work and life with boundless enthusiasm.

Thompson has decided to marry her lifelong passion (she had six to 12 espresso shots daily in high school) and her 10 years of professional coffee experience with Alfalfa’s values-driven culture. On the eve of a long-awaited promotion, Thompson gave it all up for the opportunity to build Alfalfa’s coffee bar from the ground up. She turned in her Starbucks title of “coffee master” and left Austin, Texas, and the world’s largest coffee corporation, for the corner of Broadway and Arapahoe in Boulder.

Thompson and others in the devotional, near-obsessive world of what’s known as “third-wave” artisanal coffee have obviously found their calling.

The folks at Alfalfa’s don’t just want to catch this wave.

“We want to advance that cause [by creating] a destination coffee house within a natural foods market,” says Alfalfa’s co-founder Hugo Van Seenus.

The Dutch-born Van Seenus, one of four co-founders of the new Alfalfa’s, brings to the table his European sensibility and experience in founding three other natural food markets, including Boston’s famed Bread and Circus, to the task.

“Most everyone has the same equipment; we wanted to do something better,” says Van Seenus.

Alfalfa’s has invested $5,390 for two top-of-the-line Malkonig grinders and $12,000 for two state-of-the-art, computerized Bunn Trifecta brewers. By comparison, a standard grinder and brewer might run $800 and $1,500, respectively.

Alfalfa’s Trifectas are the only ones believed to be in retail use between the Mississippi and the West Coast, and they add to Boulder’s prominence on the national coffee map. (Boulder’s Boxcar Roasters uses a Trifecta for quality control.)

Like wine and cheese, coffee is trending increasingly locale-specific, with roasters not only sourcing from specific regions, but cultivating exclusive relationships with specific farmers. The idea behind Trifecta’s 10 computerized brew settings is to deliver on the promise of single-origin distinctive taste, as opposed to just reading about it on the package label. Temperature settings, agitation and pause times are key.

“Never has a single-cup brewer with as many variables and parameters been available before,” says Rusty Angell, Trifecta field correspondent.

This decidedly high-tech approach is the counterpart to Thompson’s “Guest Rotation” program, which features coffees from out of town, including nationally prominent roasters such as Portland’s Stumptown, Chicago’s Intelligentsia, San Francisco’s Blue Bottle and Santa Cruz’s Verve. Single-origin coffees from Indonesia, Ethiopia, Costa Rica and elsewhere are brewed in the Trifecta, each according to their own carefully dialed-in “recipe.” Noteworthy blends from these roasters with names such as “Hair Bender” and “Honey Badger” are for sale by the pound as well. Exotic in a different way, the beans for Alfalfa’s cold-brewed iced coffee come from Big Bend Roasters in the tiny West Texas town of Marfa, which Thompson happened upon years ago on a road trip.

Many premium roasters, such as Stumptown, won’t sell their coffee to just anyone. It has an unusually thoughtful and relationship-oriented new vendor application process due to concerns that its carefully sourced and freshly roasted coffee not be served outside the seven- to 10-day “freshness window,” as well as about the manner in which it is brewed. Currently, Alfalfa’s is the only outlet serving Stumptown in Colorado, and according to Stumptown’s Chrissy Hoag, it was Thompson’s passion and knowledge that won them over.

How much does all this cost? Between $2.15 and $4.40 for a 12-ounce cup of Trifecta coffee, based on a four-tiered pricing structure.

According to Thompson, “people are digging it, especially Stumptown Sumatra.” In the three months since Alfalfa’s opening, Trifecta sales have grown to 20 percent of Alfalfa’s coffee flow.

For those who might be put off by the price, Thompson points out a more affordable way to sample Trifecta coffee: To maximize freshness, Alfalfa’s baristas make each cup of decaf to order in the Trifecta, but charge only the standard brewed cup price. The $1.40 standard cup of organic coffee, by design, is the lowest of any major retailer in town.

Seeking to balance the local and the exotic, Alfalfa’s features Boulder’s OZO coffee as its regular daily brew, as well as in its bulk section, and plans to spotlight other local roasters in the guest rotation.

Also in the works is an exclusive contract with a coffee farm in Biolley, Costa Rica, recently purchased by Boulder couple Chris Lites and Jennifer Long and designed to function for the economic benefit of the local population.

Thompson takes pride in the fact that customer satisfaction and average ticket sales increased on her watch at Starbucks. She’s confident that through offering “legendary service” and by continuing to find ways to push the boundaries of customers’ coffee experience, she will once again foster that all-important “culture of recommendation.”

In doing so, Thompson pays homage to her idol, Starbucks’ Howard Schulz, and his notion of coffeehouse as neither work nor home, but “the third place.” She says she watched sadly as Starbucks drifted away from Schulz’s core vision.

Likewise, Alfalfa’s founders, pioneers of the natural foods movement, say they have watched corporate consolidation and a drifting away from the values of the movement they helped found. According to Van Seenus, Alfalfa’s seeks a return to the roots of natural foods with a “small is beautiful” philosophy.

A “Coffee 101” educational kickoff is slated for late August in collaboration with OZO, The Cup and other local vendors. Weekly coffee cuppings will follow, at 3 p.m. on Fridays.