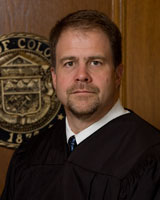 Judge
Thomas Francis Mulvahill, a district judge since 2009, rated “a
near-perfect 3.91” out of 4 among non-attorneys (jurors, other judges,
clerks and so on) in his Colorado Office of Judicial Performance
Evaluation survey. He is neutral and fair in oral arguments, and his
opinions are clear and easy to understand, the COJPE says. He’s a model
of judicial awesomeness, basically.

Mulvahill
shredded the competition — OK, it’s not a competition, but still, if
it were — in the survey ratings. He rated higher than average in just
about every category.

A
former chief prosecutor for the City of Lakewood, Mulvahill also has
background as a criminal defense lawyer in Denver, which might explain
why he doesn’t lean toward the prosecution as a few others on the ballot
do. We recommend retention for Mulvahill.