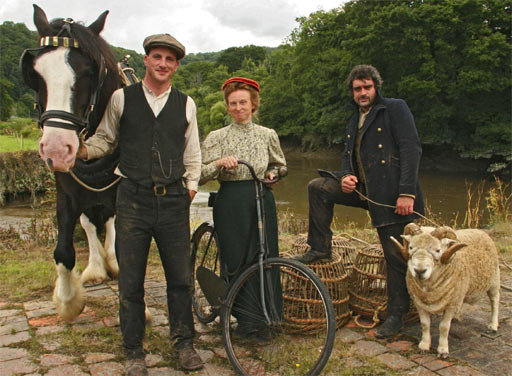 If you haven’t watched the BBC series The Edwardian Farm, I highly recommend it. A series that ended this past January, the program features historian Ruth Goodman and archaeologists Alex Langlands and Peter Ginn, who attempt to show what daily life was like during the Edwardian period on a farm at Morwellham Quay, a historic quay in Devon in southwest England.

This isn’t an insipid reality TV show that pairs hapless city dwellers with unpleasant chores, icky food and bad smells so that we can watch them shriek and cry and complain. It’s a documentary that makes history come alive — albeit with some humor.

The location of the program is important because everything the three stars do is based on the natural resources, weather and landscape of Morwellham Quay. As they attempt to put food on the table and “earn a crust,” they look back on the industries that sustained the areas residents in historical times — lace making, growing oats, market gardening, mining, fishing, fish farming and raising beef, chickens and sheep.

Experts on the history, Goodman, Langlands and Ginn nevertheless have little real-life experience with the tasks they face and often call upon those who do, learning new skills with each episode. First, there is old Farmer Mudge, whose name, face and adorable Cornish accent make him seem like a character from a Harry Potter novel. He assesses the market value of their surplus hay, advises them which crops to plant, tells them how much quicklime they need to put on their fields.

“You have to keep your lime up,” Mudge tells them. “Obviously, you want to put two tonne an acre.”

Obviously. In addition to Mudge, there’s an elderly gent who knows how to use an old steam-powered plough. There are the elderly women who advise Ruth about raising pigs, dyeing Easter eggs with local plants and attempt (in vain) to teach her how to tat lace. There’s the old man who tells Alex and Peter how to build and thatch a hayrick so that their hay won’t rot over the long winter, not to mention the fellow who guides them as they shovel limestone and coal into a limekiln for 18 hours nonstop in an effort to make the 10 tons of quicklime they need for their fields.

As an unrepentant history geek, I find all of this fascinating. From ingenious methods for preserving food to gathering lanolin from fleece to the latest contraptions for hatching chicks, the program opens the door to a world that is on the brink of being lost.

What emerged for me as I watched the program’s 12 episodes was how much knowledge Mudge and the other elderly men and women had at their command. From ancient techniques for keeping hay dry and repairing hedgerows to restoring a limekiln and building a coracle out of willow wands to smoking mackerel and gathering certain kinds of seaweed from rocks along the Devon shore, they still possess the mad skillz that kept their grandparents alive.

In 10 years — 20 tops — that knowledge will disappear with them. And then the daily life of Morwellham Quay will slip entirely into history.

This week, Transition Colorado has hosted a series of events as part of EAT LOCAL! Week to highlight the importance of shifting our food economy from a global one that is overly dependent on fossil fuels and big agribusiness to a local one that relies more on small local farms and human muscle. Eating locally grown produce not only helps support small farms and farmers, but also provides us with a fresher, more environmentally friendly option than pesticide-laden crops and genetically modified foods flown in from all corners of the globe.

For now, eating locally grown produce is a choice. One day, when the oil is gone, it will be a necessity. And on that day, we’re all going to wish we knew a Farmer Mudge.

The “Transition” movement might start with food, but it implies growth in our skill set, from simply puttering in the dirt and bragging about a handful of tomatoes to growing enough food to feed our families — and preserving that food for the winter.

My grandparents had those skills.

Many of their generation did what they did — built their own homes, grew their own food, made their own clothing.

It struck me as I watched the series conclusion that we in Boulder County do a relatively decent job of identifying “cultural resources” on the land — historic buildings, American Indian sites, pioneer graveyards — but we make very little effort to find our living cultural resources, those who can share with us the almost-lost knowledge of how people did things for themselves before it became the norm to outsource all of the essential functions of our lives so that we could watch more TV.

Far too often we view the elderly as irrelevant. As this program demonstrated, they are repositories of wisdom, keepers of skills, human encyclopedias. We would do well to learn from them — while we still can.