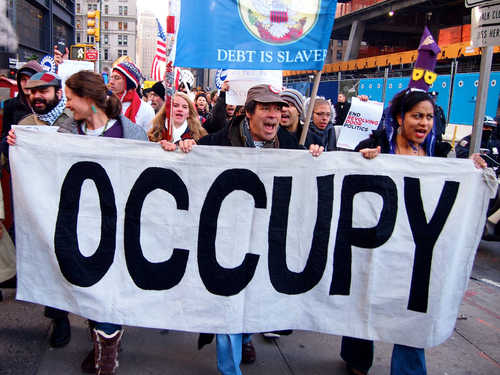 The first time I heard about the disgusting concept of “free speech zones” at protests, it was at big national political conventions leading up to the 2004 presidential election.

The concept was put into use in Denver when George W. came to speak during his re-election bid. Those who wanted to cheer for the president or watch like sock puppets were welcome to move about freely. Those of us who felt that Bush’s policies were objectionable and his war in Iraq immoral were forced to stand in cordoned-off areas — what Judd Golden of Boulder’s ACLU calls “free speech cages” — far from George’s ears, if we wanted to so much as hold up a sign. Anyone who defied these rules was forcefully removed from the crowds by thugs in uniforms.

The constitutionally guaranteed “right of the people peaceably to assemble, and to petition the Government for a redress of grievances” was swept aside.

But that was Bush-era Big Government, right? The government of the People’s Republic of Boulder, where we’re always protesting something, would never consider hindering free speech in such a way.

Wrong. According to a June 5 memo from Boulder City Manager Jane Brautigam to city council, city brass would like council members to pass a new ordinance that would require residents to apply for a permit before they hold a protest in a city park if more than 25 people are expected to attend. The ordinance would also require protesters to stay in a specific “advocacy area.”

“Really?” Really. Clearly a response to the Occupy movement, the ordinance would transform protests from a right to be freely exercised at the discretion of the aggrieved — that being The People — to something that government might allow you to do, provided you agree to their numerous terms. Those terms might include a fee for the permit, application deadlines, damage deposits, time limitations and cleanup fees.

This is wrong on its face, and city council needs to reject the idea outright like the Parks and Recreation Advisory Board did earlier this year. The proposed ordinance is a clear infringement on our First Amendment rights.

City council has already infringed on people’s right to gather peaceably, by closing public parks at night. Now, they want to require people who wish to protest to obtain permits and stand in pre-approved control areas like herded cattle — unless a protest develops spontaneously in response to a current event.

“The Rocky Mountain Peace and Justice Center believes the Council should do everything in its power to protect free speech and the right of the people to protest and seek a redress of their grievances,” says Carolyn Bninski, a spokeswoman with the activist organization. “City Manager Jane Brautigam’s proposal to put restrictions on our freedom to protest is unnecessary, an infringement on our rights and counterproductive. It must be absolutely rejected by the Council. If Council accepts this attack on our Constitutional rights, what’s next?”

This is a slippery slope Boulder should never have found itself on. It’s not up to the government to decide when and if the public gets to use public spaces to exercise the constitutionally protected right to assemble and speak. The very purpose of that clause of the First Amendment is to guarantee that if government does something wrong, government leaders will hear about it through raised voices, angry shouts and fists in the air. That is, after all, how the Founders expressed themselves.

The United States is a nation that was built on dissent. Protests are a tradition that endures, from the Boston Tea Party to the civil rights-era marches (during which low-brow bureaucrats tried to use ordinances and muscle to halt marchers) to the Occupy movement.

Brautigam should withdraw her memo and, if some kind of system is needed for whatever unfathomable bureaucratic reason, establish a reservation system similar to the one used for the Pearl Street Mall instead.

Freedom of speech and assembly isn’t an opportunity the city grants us in exchange for paying a fee and getting the paperwork in on time.

It is our absolute, incontestable right.